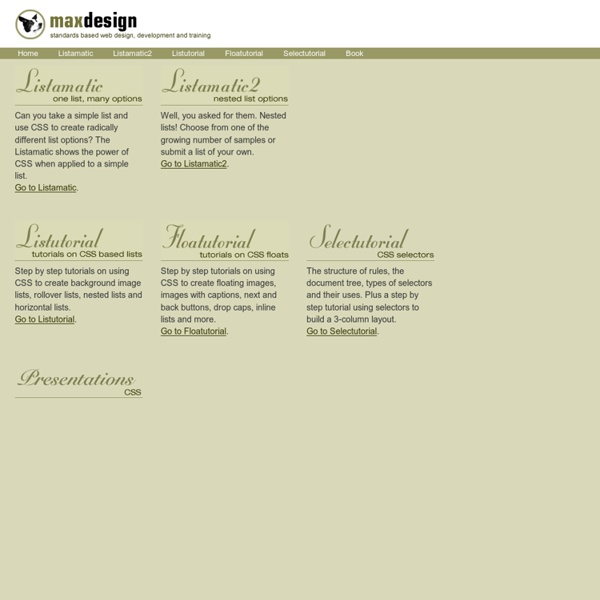 Step by step CSS float tutorial Floatutorial takes you through the basics of floating elements such as images, drop caps, next and back buttons, image galleries, inline lists and multi-column layouts. General info Tutorial 1. Floating an image to the right Float an image to the right of a block of text and apply a border to the image. Tutorial 2.

Hierarchical Menus with the Underrated style.display Object One of the most common DHTML requests I get is for a Windows Explorer-style hierarchical menu, where there's a list of topics or "folders" that a user can click on to reveal subtopics, or "files," within that folder. It's a common desktop metaphor that seems ever more necessary on the Web, especially as we see navigation bars incorporating larger and more complex content while still trying to fit on the screen. Hierarchical menus are a solution to the common problem of having too many links in too small a space. But, I figured, there are several Web sites where you can find large, complex scripts to create large, complex hierarchical menus. Instead, I'll show you how to make your own menus, of any length or complexity, with the use of an extremely useful and widely unknown DOM CSS property, style.display.visibility. When you set an element to visibility="hidden", it simply disappears while still taking up space on the page, almost as if it were transparent.

CSS Style Guides As we wrap up our recent poll on ordering CSS properties, it brings up the larger issue of CSS style guides. Ordering properties is just one choice you have to make that makes up a complete styling strategy. Naming is a part of it. Sectioning is a part of it.

Math in HTML (and CSS) - presenting mathematical expressions on Web pages Typesetting math: 100% How to present math­emat­ical ex­pres­sions using a language that has so little markup for them? Web authors often need resort to images, but there are more flexible approaches, like MathJax. Moreover, if you need just some special symbols or simple ex­pressions, a lot can be done in HTML, assisted with style sheets (CSS). This document mainly discusses relatively simple mathematical expressions rendered one-dimensionally (inline), though possibly with superscripts or subscripts. The word “mathematical” is used in a rather broad sense here, covering different for­mal­isms and symbols, including the symbols of physics, formal logic, etc. CSS: Specificity Wars CSS: Specificity Wars Join me, and together we can rule the galaxy as father and geeks! A few weeks back in Cupertino, I saw Aaron explain how the specificity of CSS selectors is calculated in a way which I hadn't seen before. Then today I came across a knotty problem while building XHTML and CSS templates for a new project where two selectors behaved differently to how I expected and I realised that I had not completed my training. The Dark Side

Responsive Web Design The English architect Christopher Wren once quipped that his chosen field “aims for Eternity,” and there’s something appealing about that formula: Unlike the web, which often feels like aiming for next week, architecture is a discipline very much defined by its permanence. Article Continues Below A building’s foundation defines its footprint, which defines its frame, which shapes the facade. Each phase of the architectural process is more immutable, more unchanging than the last. Creative decisions quite literally shape a physical space, defining the way in which people move through its confines for decades or even centuries. Working on the web, however, is a wholly different matter.

CSS Gradient Text Effect Do you want to create fancy headings without rendering each heading with Photoshop? Here is a simple CSS trick to show you how to create gradient text effect with a PNG image (pure CSS, no Javascript or Flash). All you need is an empty <span> tag in the heading and apply the background image overlay using the CSS position:absolute property. This trick has been tested on most browsers: Firefox, Safari, Opera, and even Internet Explorer 6. Continue to read this article to find out how. View Demos 15 CSS Tricks That Must be Learned As web designers and developers, we have all come to learn many css tricks and techniques that help us achieve our layout goals. The list of these techniques is an ever expanding one, however, there are certain tricks that are essential to achieve your goal. Today, we will review 20 excellent css techniques to keep in mind when developing your theme. 1.

Social Media Sparked, Accelerated Egypt's Revolutionary Fire Anti-government protesters celebrate in Tahrir Square in downtown Cairo Friday. Fireworks burst, and Egypt exploded with joy and tears of relief after pro-democracy protesters brought down President Hosni Mubarak with a momentous march on his palaces and state TV. Emilio Morenatti/AP If three decades of violent repression and despotic rule were kindling for the Egyptian revolution, social media was both a spark and an accelerant for the movement. Did social media like Facebook and Twitter cause the revolution?

A Comprehensive Guide to CSS Resets This guide examines the infinite-like variety of CSS resets created by web developers and designers across the world. While almost all of these CSS resets are generally provided free for public use (many through Creative Commons licensing), it is incumbent upon you to check the terms of use before putting them to use in your projects. This guide follows Part 1, where the history of CSS resets was discussed; you’re advised to read that before this one to get the most out of this guide. This is Part 2 of a three-part series of articles on the topic of CSS resets. In putting together this guide, the 2007 collection of resets by Jeff Starr — who, as an aside, has contributed articles on Six Revisions — was used as a jumping-off point.

CSS for Accessibility W3C Note 6 November 2000 This version: (plain text, PostScript, PDF, gzip tar file of HTML, zip archive of HTML) Social networks credited with role in toppling Egypt's Mubarak As Egypt's embattled President Hosni Mubarak gave up his presidency Friday, analysts and some of the Egyptian protestors said he'd still be in charge if not for the power of social networking. After 18 days of tumultuous protests and stubborn refusals to leave a position he's held for 30 years, Mubarakgave up power today, handing over authority to the nation's military leaders. During a time of unrest that saw Mubarak's regime disconnect Egypt from the Internet for several days, social networking sites like Facebook and Twitter served as critical tools for the people seeking to topple the long-time ruler. President Barack Obama this afternoon noted the role of technology in the uprising, praising Egyptians who used "their creativity, talent and technology to call for a government that represented their hopes and not their fears." "Because of that, Mubarak and his regime felt they had no other choice than to step down."