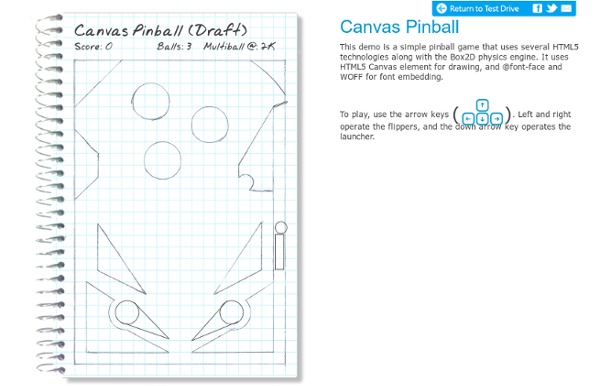 B2world sez: Hi this is a b2 object!We're running!DebugLog v1.0 Sponsored by border-radius Canvas Pinball (Draft) Score: 0 Balls: 3 Multiball @: 2K This demo is a simple pinball game that uses several HTML5 technologies along with the Box2D physics engine. To play, use the arrow keys ( ). On a touch enabled device, you can touch the flippers and launcher to play the game

DIY Skylights From Used Water Bottles Replace 50-Watt Bulbs Image via YouTube video An ingenious invention by an engineer in Brazil has made an enormous difference in his town. Simply placing a bottle of water in a hole in the ceiling can light up a room with the same brightness as a 50-watt light bulb! Random Chicken Facts Random Chicken Facts The average hen lays 300 eggs a year. The record for multiple egg yolks in one egg is nine. A chicken needs to eat approximately four pounds of feed to make a dozen eggs (about 86 cents worth of food at retail). If a chicken has red ear lobes, it will lay brown eggs if it has white earlobes it will lay white eggs.

What Female Disney Characters Might Look Like in Real Life Mar 17, 2012 Jirka Väätäinen is a Finnish designer and photographer currently studying graphic design at the Art University College at Bournemouth. His series on Behance titled Envisioning Disney Characters in “Real Life” is one of the most ‘appreciated’ (think of it as a Like on Facebook) projects of all time on Behance with 14,528 thumbs up at the time of this posting. Jirka has a really impressive portfolio of work not only on Behance, but on his personal blog as well. Jirka has tremendous talent and the Sifter looks forward to inspiring work from this artist for many years to come :) Below are 15 famous Disney female characters and what they might look like in real life.

The Bitterroot Footage My name is Chad. I'm a student at a university in New York. I just moved to a studio apartment and needed some furniture. I found a guy on Craigslist that wanted to desperately get rid of his things at super cheap prices so I went to check it out. He sold things in bulk to get rid of as much things as possible. I bought a small table and it came with a bunch of other random things. Curvy in HTML5 Curvy is a HTML5 puzzle game using the canvas element. Just rotate the tiles so that like colors connect. Modernizr tells me you don't have canvas support in your browser. Sadly, this game uses technology that's only in browsers with HTML5 support. We've tested Chrome 12, Firefox 4 and Opera 11.

How to use Google for Hacking. Google serves almost 80 percent of all search queries on the Internet, proving itself as the most popular search engine. However Google makes it possible to reach not only the publicly available information resources, but also gives access to some of the most confidential information that should never have been revealed. In this post I will show how to use Google for exploiting security vulnerabilities within websites. The following are some of the hacks that can be accomplished using Google. 1. vizio candle ashtray may 28, 2011 vizio candle ashtray ‘vizio’ by flusscreativo designed by italian studio flussocreativo, ‘vizio’ is a candle ashtray that consists of a paraffin wax body, with the wick positioned along the perimeter of the object within the central indentation. once started, the light takes a circular route, following the inner circumference of the candle in order to dissolve the paraffin and give the look of one who kidnapped by the enchantment of fire, stopped to observe its movement. during its hypnotic and suggestive run, the wick melts the wax forming a liquid pool able to hold ashes, foul odor and of course the butts.

The Chip Bag Fold Learn this chip bag fold and you will never need a clamp ever again! Have you ever had a bag of unfinished potato chips which you want to keep fresh? These simple steps will allow you to close the potato chip bag without using a clip or clamp. An example of a silly (but undeniably useful) origami fold. 1.

also entertains those of us that are bored :D by fierypuppet Mar 22

It's for easy the work, I actually think this kind of stuff allows you to clear your mind after a long writing session. by yosoytoto Mar 22