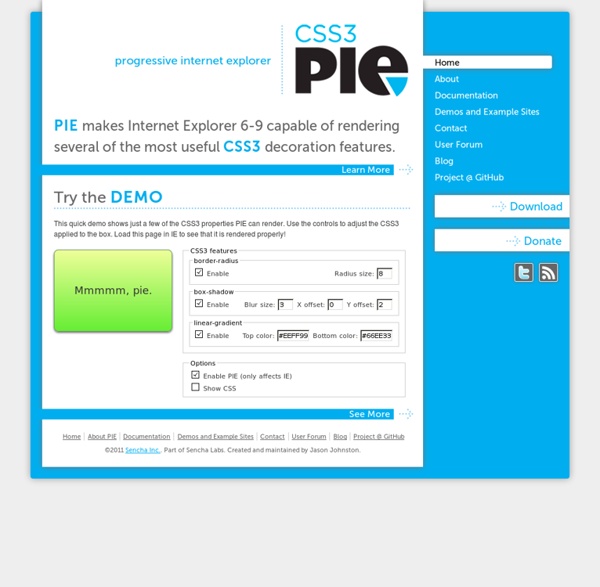 PIE makes Internet Explorer 6-9 capable of rendering several of the most useful CSS3 decoration features. Learn More This quick demo shows just a few of the CSS3 properties PIE can render. Use the controls to adjust the CSS3 applied to the box. Load this page in IE to see that it is rendered properly! Mmmmm, pie.

The Best CSS3 Tools, Experiments And Demos For Web Developers CSS3 is already the present on the Web. An authentic reality bursting with possibilities. On a daily basis Awwwards selects the best of the Web universe with the most spectacular examples of the latest version of web styling language par excellence.Tools & Generators | Experiments & Demos | Animations & PicturesEnjoy! CSS3 Tools & Generators: At the same time that the use of CSS3 has extended, lots of tools and code generators have popped up all over the place to try and facilitate coding work and simplify the application of new properties for the developer. We've talked about some of these in a previous post, but there are more and better.Lea Verou, member of the Awwwards Jury 2012, is one of the most prolific creators of these fantastic tools.

CSS Layout Generator About the CSS Layout Generator The CSS Layout Generator was first released by Tony Aslett in October 2003, since then over 871,000 layouts have been generated. Updated in November 2010, HTML5 doctype can now be selected and a simple HTML5 template with appropriate tags will be created. Other HTML and XHTML doctypes are still available. The generator helps you create the structure of your website template using valid HTML and CSS. You can create a fluid or fixed width floated column layout, with up to 3 columns and with header and footer.

Facebook Admins Can Now Unban Commenters Page administrators can now call up a list of commenters they’ve banned, and then opt to unban them. The ability for admins to ban a commenter is akin to allowing a user to block individuals from seeing the user’s profile — and the site has already allowed users to unblock profiles, so extending this to pages makes them more consistent with profiles. Banning enables administators to block repeat posters of spam or abusive content. Presumably, unbanning someone might be something one might do after an offender promises to behave.

How To Use DL, DT And DD HTML Tags To List Data vs Table List Data Many past web designers would love to create web design using table and it has been the Achilles point for web developers when it comes to debugging. Now, however when it come to listing data on a web page, example listing data of a profile, many people would use a HTML table instead. In fact, by using HTML dl, dt, dd tags, you will save on writing more codes and add more semantic value to the content. Whereas table are best use for tabular data, and should not be use in listing data, web form or web layout. Using HTML DL, DT, DD Tags Hover.css - A collection of CSS3 powered hover effects All Hover.css effects make use of a single element (with the help of some pseudo-elements where necessary), are self contained so you can easily copy and paste them, and come in CSS, Sass, and LESS flavours. Many effects use CSS3 features such as transitions, transforms and animations. Old browsers that don't support these features may need some extra attention to be certain a fallback hover effect is still in place. Licenses Hover.css is made available under a free personal/open source or paid commercial licenses depending on your requirements. To compare licenses please visit the Ian Lunn Design Limited Store and purchase a commercial license.

Developing Responsive Designs With Opera Mobile Emulator Advertisement This is our seventh article in a series that introduces useful and freely available tools and techniques, developed and released by active members of the Web design community. The first article covered PrefixFree; the second introduced Foundation, a responsive framework; the third presented Sisyphus.js, a library for Gmail-like client-side drafts. The fourth shared a free plugin called GuideGuide with us, and later we’ve announced Erskine’s responsive grid generator Gridpak and Remy Sharp’s debugging tool JS Bin. Back in 2009, when coding version 10 of Opera Mobile, my Opera colleagues decided to tune the Opera Mobile build machine so that it would churn out builds not only for common mobile platforms, but for Windows and Linux as well.

Grid-A-Licious Back in mid 2008, I created a jQuery plugin. I named it Grid-A-Licious and described it as, "Divs are placed in chronological order with a special grid" because I had no clue how to explain it better. I used this script a lot and designed many sites with it during 2008. At first, people were very skeptic and confused on how to read the grid, and thought this kind of layout belonged in real papers. This reaction slowly faded away once the layout became more and more popular when different developers and designers started to create their own script's interpretation of the floating grid layout effect. Not saying it was based on my work or script, because there were a few others that brought a similar layout effect to our attention, but not necessarily distributed as a plugin.

A Useful Collection of iPhone/iPad Apps Developer Tools and Resources The iPad was the 2010 must-have gadget of the year, and the iPhone and respective iPod Touch have been incredibly popular over the last few years. It's clear that the success of these devices can be attributed to the endless number of useful, fun, and interesting applications provided by the community. There is no doubt that the Apple platform for these mobile devices has taken the world by storm and allowed us to customize as we see fit. App development for the iPad and iPhone has become more popular than ever, and tools and resources are being created every day to help the aspiring app developer along. In this post, we'll cover a collection of the most useful tutorials, GUI kits, icon sets, and more for iPad/iPhone development.

30 jQuery Accordion Menus, Tutorials And Best Examples Accordion menus are used widely in navigating, sliding, minimizing and maximizing content. Such accordions practically are expandable whenever needed; you can really save some space and be able to show a lot of information using this technique. Yes, and, of course, such sliding content always is great from the design point of view aby giving your visitor unique experience while he is looking at the site. Great, isn’t it? Reboot, Resets, and Reasoning By Chris Coyier On reset I saw in an article by Nicholas Cerminara the other day (careful visiting that link, looks like they have some tracking scripts run wild) that Bootstrap 4 has a new CSS reset baked in they are calling Reboot: Reboot, a collection of element-specific CSS changes in a single file, kickstart Bootstrap to provide an elegant, consistent, and simple baseline to build upon. If you're new to CSS development, the whole idea of a CSS reset is to deal with styling inconsistencies across browsers. For example, just now I popped a <button> onto a page with no other styling whatsoever. Chrome applies padding: 2px 6px 3px; - Firefox applies padding: 0 8px;.