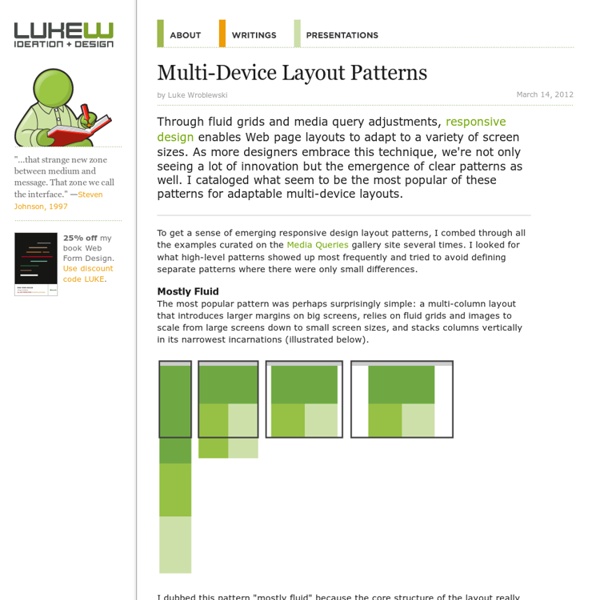 Through fluid grids and media query adjustments, responsive design enables Web page layouts to adapt to a variety of screen sizes. As more designers embrace this technique, we're not only seeing a lot of innovation but the emergence of clear patterns as well. I cataloged what seem to be the most popular of these patterns for adaptable multi-device layouts. To get a sense of emerging responsive design layout patterns, I combed through all the examples curated on the Media Queries gallery site several times. I looked for what high-level patterns showed up most frequently and tried to avoid defining separate patterns where there were only small differences. Mostly Fluid The most popular pattern was perhaps surprisingly simple: a multi-column layout that introduces larger margins on big screens, relies on fluid grids and images to scale from large screens down to small screen sizes, and stacks columns vertically in its narrowest incarnations (illustrated below). Column Drop Layout Shifter

Gridpak: The Responsive Grid Generator Advertisement This article is the fifth in our new series that introduces the latest, useful and freely available tools and techniques, developed and released by active members of the Web design community. The first article covered PrefixFree1; the second introduced Foundation2, a responsive framework; the third presented Sisyphus.js3, a library for Gmail-like client-side drafts and the fourth shared with us a free plugin called GuideGuide4. Today, we are happy to present Erskine’s responsive grid generator: Gridpak. In the near 18 months since A List Apart published Ethan Marcotte’s article Responsive Web Design5 much has changed in the way we approach our design process. The Problem Challenges and problems inevitably arise when adopting new ideas and ways of working. This is what our typical design and development cycle for creating a responsive website with a flexible grid system used to look like: There were 2 crucial drawbacks to this approach: Solution Stylesheets Help Us Help You

adamdbradley/foresight.js Yiibu - Lovingly crafted mobile experiences Articles Time The closing talk from the Full Frontal conference held in Brighton in November 2013. The Power Of Simplicity The closing keynote from the border:none event held in Nuremberg in October 2013. This Is For Everyone The patent that never was. Smashing Conference closing keynote The final talk at the Smashing Conference held in Freiburg in September 2013. Beyond Tellerrand A look beyond the edge of the plate. As We May Link This piece first appeared in issue 3 of The Manual, a thrice-yearly print publication. Lesson First published in issue 3 of The Manual. There Is No Mobile Web The opening keynote from the Breaking Development conference held in Nashville, Tennessee in September 2011. Brighton SF with Brian Aldiss, Lauren Beukes, and Jeff Noon. On the eve of dConstruct 2012, I hosted an evening of readings and chat with three of the brightest stars of the science-fiction world at the Pavilion Theatre in Brighton. Secret Source Another interview for the Sitepoint podcast. Of Time And The Network One Web