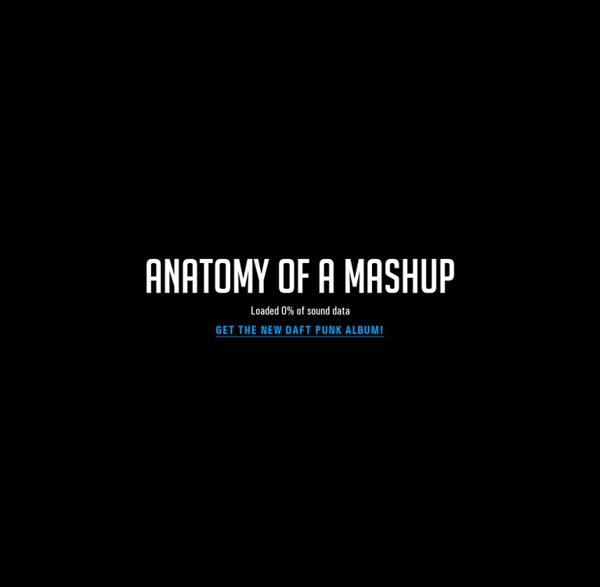 Loaded 0% of sound data A mashup is a song created by blending two or more other songs. The more complex a mashup gets, the harder it is to distinguish the parts that are being used to create what you're hearing. This visualisation of the song "Definitive Daft Punk" by Cameron Adams dissects a mashup in realtime to show you how each of the 23 parts contributes to the greater whole. Better performance in Chrome or Safari Get the new Daft Punk album!

Photosynth Photosynth is a software application from Microsoft Live Labs and the University of Washington that analyzes digital photographs and generates a three-dimensional model of the photos and a point cloud of a photographed object.[1] Pattern recognition components compare portions of images to create points, which are then compared to convert the image into a model. Users are able to view and generate their own models using a software tool available for download at the Photosynth website. History[edit] Photosynth is based on Photo Tourism, a research project by University of Washington graduate student Noah Snavely.[2] Shortly after Microsoft's acquisition of Seadragon in early 2006, that team began work on Photosynth, under the direction of Seadragon founder Blaise Agüera y Arcas.[3] Microsoft released a free tech preview version on November 9, 2006. In March 2010, Photosynth added support for Gigapixel panoramas stitched in Microsoft ICE.

Zune.net The purpose of this Q&A is for Zune users to learn where to find information and support for their Zune products and services, and to learn how to take advantage of Xbox Music and Xbox Video. What’s changing with the Zune Marketplace? Zune Marketplace no longer supports rental and purchase of content, or browsing movies and TV shows. Will this impact my ability to use my Zune Music Pass? No. You will still be able to stream or download songs with your Zune Music Pass.

7 Alternatives to Pandora and Last.FM Whether you are annoyed by the ads on Pandora, the limited number of skips, or the abyss of cruel 30-second song teasers from Last.FM, many online listeners are growing weary of mainstream methods of hearing new music. While the Pandora algorithm is strong, and the Last.FM related artists tool is pretty useful, don’t fool yourself in to thinking that there aren’t other great ways to expose yourself to new music in the depths of cyberspace. Here are 7 alternatives to Pandora and Last.FM that will infuse your day with an uninterrupted stream of music that large record companies haven’t managed to squash under their thumbs yet. StumbleAudio

New HBO True Blood Campaign BBDO New York has created a new online campaign to promote the release of the True Blood series 3 DVD. Designed to test the knowledge of the show's greatest fans, the site allows users to zoom into an online film to search out and answer clues related to the series. The film below appears on the website. In the online version, viewers are able to pause the action and, using a nifty scroll bar at the bottom of the screen, search for clues by clicking within the film. When a clue is found, a question box will open up.

Bar Code Madness! Artist Scott Blake is known for making art from QR codes and bar codes. Each code can be individually scanned and linked to the person who is being portrayed. E.g. the Elvis Presley image is connected to a large number of CDs and music by the singer. Notes by Blake (published at the Barcode Art website): I have made more than 30 large-scale digital portraits of cultural icons using actual barcodes connected to some aspect of their lives. Adaptive Streaming with H264 Streaming Module back Adaptive streaming is similar to pseudo streaming, but instead of serving one large video file, the video is delivered in a series of short HTTP downloads (segments). This delivery technique is described in this article. Note that we are requesting Virtual Video Clips from the webserver. The underlying video is just *one* file, so you can use your original encoded videos.

Invisible Cities by Maria Popova What social media activity has to do with the literal lay of the land. In December, the now-infamous map of Facebook friendships revealed an uncanny cartography of the world depicted purely through social relationships data. Now, a project by Christian Marc Schmidt and Liangjie Xia is taking the concept ambitiously further: Invisible Cities is a transmedia mapping project, displaying geocoded activity from social networks like Twitter and Flickr within the context of an actual urban map — a visceral, literal embodiment of something VURB‘s Ben Cerveny has called “the city as a platform,” the idea that cities are informational media and living computational systems for urban society. By revealing the social networks present within the urban environment, Invisible Cities describes a new kind of city — a city of the mind.”

Holography without Lasers: Hand-drawn Holograms [SCIENCE HOBBYIST] Several hologram plates.(Obviously you cannot see the 3D effect in this flat photograph.) Depending on the tilt of the plate with respect to the sun, you might accidentally discover the "pseudoscopic" image of the "V," and it may appear to float *above* the surface of the plastic. Tilt the plate to bring the far edge up and towards you and you'll then find the "orthoscopic" image floating deep within the plate. If you had inscribed your entire name on the plastic, you'd now be seeing it down there within the surface.