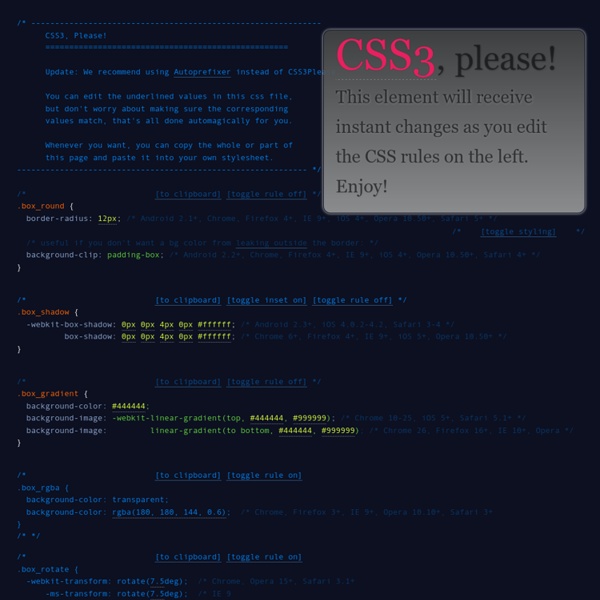 Autoprefixer: A Postprocessor for Dealing with Vendor Prefixes in the Best Possible Way By Andrey Sitnik On The following is a guest post by Andrey Sitnik, the creator of the Autoprefixer tool, a "postprocessor" for handling vendor prefixes in CSS. Why use this instead of your preprocessor or another tool? Many reasons. Andrey will explain. Autoprefixer parses CSS files and adds vendor prefixes to CSS rules using the Can I Use database to determine which prefixes are needed.

HTML KickStart HTML Elements & Documentation - 99Lime.com Setup Download HTML KickStart Include jQuery and HTML KickStart <script src=" src="js/kickstart.js"></script><!-- KICKSTART --><link rel="stylesheet" href="css/kickstart.css" media="all" /><! The Best CSS3 Tools, Experiments And Demos For Web Developers CSS3 is already the present on the Web. An authentic reality bursting with possibilities. On a daily basis Awwwards selects the best of the Web universe with the most spectacular examples of the latest version of web styling language par excellence.Tools & Generators | Experiments & Demos | Animations & PicturesEnjoy! CSS3 Tools & Generators: At the same time that the use of CSS3 has extended, lots of tools and code generators have popped up all over the place to try and facilitate coding work and simplify the application of new properties for the developer. We've talked about some of these in a previous post, but there are more and better.Lea Verou, member of the Awwwards Jury 2012, is one of the most prolific creators of these fantastic tools.

CSS3 Solutions for Internet Explorer - Smashing Magazine Advertisement Experienced developers understand that CSS3 can be added to new projects with progressive enhancement in mind. This ensures that content is accessible while non-supportive browsers fall back to a less-enhanced experience for the user. But developers could face a situation where a client insists that the enhancements work cross-browser, demanding support even for IE6. In that case, I’ve collected together a number of options that developers can consider for those circumstances where support for a CSS3 feature is required for all versions of Internet Explorer (IE6, IE7, & IE8 — all of which are still currently in significant use). Opacity / Transparency

Developing Responsive Designs With Opera Mobile Emulator Advertisement This is our seventh article in a series that introduces useful and freely available tools and techniques, developed and released by active members of the Web design community. The first article covered PrefixFree; the second introduced Foundation, a responsive framework; the third presented Sisyphus.js, a library for Gmail-like client-side drafts. The fourth shared a free plugin called GuideGuide with us, and later we’ve announced Erskine’s responsive grid generator Gridpak and Remy Sharp’s debugging tool JS Bin. Back in 2009, when coding version 10 of Opera Mobile, my Opera colleagues decided to tune the Opera Mobile build machine so that it would churn out builds not only for common mobile platforms, but for Windows and Linux as well.

Install the Compass Stylesheet Authoring Framework Installing Ruby Compass runs on any computer that has ruby installed. For more advanced users you may want to install rvm. Setting up the ruby environment $ gem update --system$ gem install compass Looking for the next release's preview version? 12 Fantastic PSD to HTML Tutorials As people become more interested in web development, the demand for quality tutorials arises. One of the most frequently requested tutorials is on the topic of slicing your PSD into quality HTML and CSS code. This is quite an intensive process and it can be hard to learn on your own. Today, we’ll have a look at 12 excellent tutorials for converting a PSD to HTML/CSS. Converting From PSD to HTML ScreencastFirst up on our list is an excellent tutorial by the boss man himself, that is, Jeffrey way of NETTUTS.