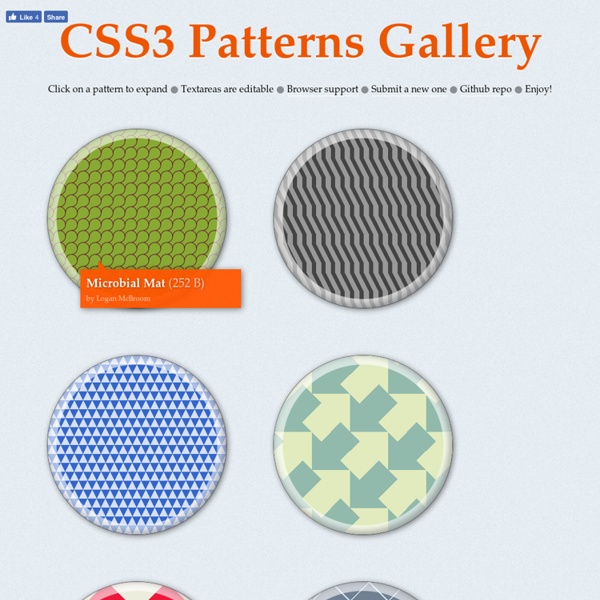 Browser support The patterns themselves should work on Firefox 3.6+, Chrome, Safari 5.1, Opera 11.10+ and IE10+. However, implementation limitations might cause some of them to not be displayed correctly even on those browsers (for example at the time of writing, Gecko is quite buggy with radial gradients). Also, this gallery won’t work in Firefox 3.6 and IE10, even though they support gradients, due to a JavaScript limitation. Submission guidelines If you have a new pattern to submit, please send a pull request. Does it present a new technique?

CSS3 linear gradients By Chris Mills Introduction For as long as we can remember, we have used colour gradients on the Web to brighten things up, and add class to designs. If you want to create a fantastic looking button, panel, gauge, progress bar or other UI feature, a gradient is the way to go. The Shapes of CSS Learn Development at Frontend Masters CSS is capable of making all sorts of shapes. Squares and rectangles are easy, as they are the natural shapes of the web. Add a width and height and you have the exact size rectangle you need. Add border-radius and you can round that shape, and enough of it you can turn those rectangles into circles and ovals. We also get the ::before and ::after pseudo elements in CSS, which give us the potential of two more shapes we can add to the original element.

The ultimate guide to getting started in web design Do you want to learn how to design your very first website? Perhaps you’ve designed a few and now you’d like to turn your skills into a career? This article is here to point you in the right direction. One article can’t cover everything you need to know of course; the skills, tools, and technologies you’ll need to become a reasonably proficient designer, will take months to learn and years to master. Sorry, no. There really isn’t a faster way. Infographics Showcase - Infographic Reviews - Submit Infographic - Part 2 Filed under: Business Infographics, Legal Infographics, People Infographics | Comments Off The Special Risks Bureau has compiled a list of the most expensive body parts celebrities have insured, and used them to create the most valuable celebrity couple in the world. Body parts include Gene Simmons’ tongue, Rod Stewart’s voice, Cristiano Ronaldo’s legs, Julia Roberts smile, Jennifer Lopez’s bum, and Mariah Carey’s legs.

Documentation Spritely is a simple plugin with only two key methods, sprite() and pan() both of which simply animate the background-image css property of an element. The difference between the two is that a 'sprite' image contains two or more 'frames' of animation, whereas a 'pan' image contains a continuous image which pans left or right and then repeats. Typically, in either case, you would use a png file (with or without transparency) for this. You might wish to use a transparent gif for Internet Explorer 6, though it probably won't look as good. Your html elements must already be the correct size you want the sprite to appear, but the background image will typically be larger than the html element, and the spritely methods reposition the background image within the html element. For documentation in languages other than English, please see Unoffical Documentation.

12 documentaires que tous les graphistes devraient voir This collection of documentaries has been curated to be both a great foundation and fresh inspiration for any graphic designer or artist. The films cover all kinds of creation – from street art to industrial design to typography – but all of them are guaranteed to get your creative juices flowing. Here they are: 1. Helvetica