AppMobi.com- Create Mobile and Web Apps with HTML5 and JavaScript 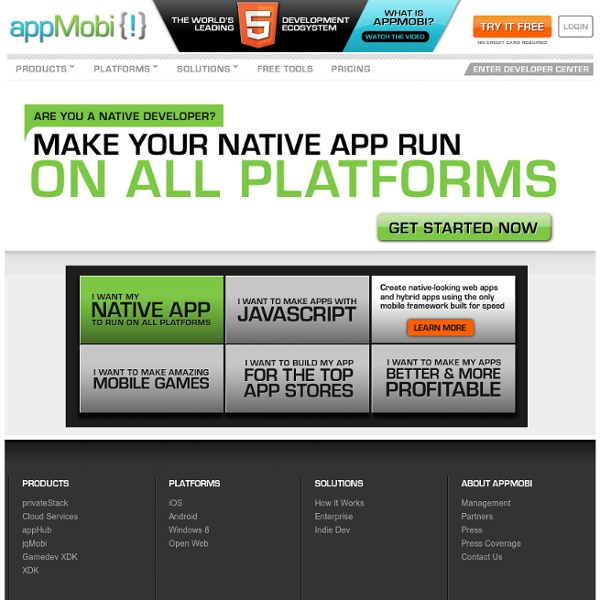 Prefix free: Break free from CSS vendor prefix hell! -prefix-free lets you use only unprefixed CSS properties everywhere. It works behind the scenes, adding the current browser’s prefix to any CSS code, only when it’s needed. The target browser support is IE9+, Opera 10+, Firefox 3.5+, Safari 4+ and Chrome on desktop and Mobile Safari, Android browser, Chrome and Opera Mobile on mobile. If it doesn’t work in any of those, it’s a bug so please report it.

Facebook Mobile User Counts Revealed: 192M Android, 147M iPhone, 48M iPad, 56M Messenger Facebook keeps user counts for its mobile apps hidden, but analyst Benedict Evans found a way to uncover them and they provide critical insight into the direction and performance of Facebook’s mobile efforts. Most interestingly, Facebook’s Android user count is growing much faster than its iPhone user base, but is found on a lower percentage of Android devices. Let’s take a closer look at the data. A year ago, Facebook stopped reporting user counts for its own mobile apps via the Graph API.

Will HTML5 replace native apps? It might: here's how to figure out when The FT's web app – written in HTML5 – is already more popular than its native iOS apps. So is this the path of the future? For next year, even? One of my favourite tweets of recent weeks comes from Jon Lech Johansen (of DeCSS and latterly of DoubleTwist fame): "Next year HTML5 will replace native apps" is the new "Next year will be the year of Linux on the desktop". I bet Google's team wishes that native apps were passé, seeing as it had to claw back a malfunctioning iOS app from the market on Wednesday. 40 Useful JavaScript Libraries - Smashing Magazine Advertisement Popular JavaScript libraries such as jQuery, MooTools, Prototype, Dojo and YUI can be great for accomplishing common JavaScript tasks. These libraries provide many functions, whether the matter is related to events or effects or AJAX. And if one of these libraries can’t do the job, a plug-in probably exists that can.

petewarden/iPhoneTracker @ GitHub This open-source application maps the information that your iPhone is recording about your movements. It doesn't record anything itself, it only displays files that are already hidden on your computer. Download the application Read the FAQ Here's why you should be happy that Microsoft is embracing Node.js Microsoft-watching superstar Mary Jo Foley alerted us on Tuesday to the release by Microsoft and Joyent of the first stable build of Node.js for Windows servers. Node.js is the latest technology Microsoft has adopted, in a continuing trend to bring programming technologies developed outside of Redmond to those coding against the Microsoft stack. The good thing about Node.js though is that it's really cool and promises to fit in beautifully with the way the we should be building web applications with .NET. Too cool for school One problem that I've always had as a professional software developer is the pressure I feel from peers to get into new technologies.