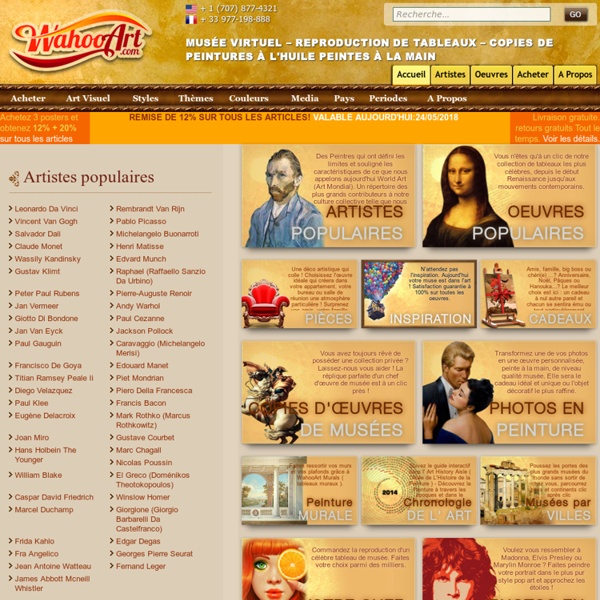 buddhabrot Buddhabrot The 6 capital planes of the good ole Buddhabrot. The Mandelbrot is contained inside a circle, so it can be easily inverted. The following planes represent the inverted Buddhabrot. Nebula-style colored Buddhabrot: the red channel's for high densities, green for average, and blue for low. 100 Ideas That Changed Art by Maria Popova From cave paintings to the internet, or how art and cultural ideology shape one another. On the heels of yesterday’s 100 Ideas That Changed Photography comes 100 Ideas That Changed Art (public library) — a succinct account of the most influential developments in the history of art, from cave paintings to the internet, compiled by art historian and broadcaster Michael Bird. From conceptual innovations like negative space (#98), color codes (#33), and street art (#94) to landmarks of communication like making books (#21), propaganda (#12), and handwriting (#24) to ideological developments like “less is more” (#30), protest (#79), and the body as surface (#9), each idea is contextualized in a 500-word essay with key visual examples. Bird writes in the introduction:

Château de Versailles Lying in the suburbs of Paris, the Château de Versailles was the symbol of the absolute monarchy espoused by Louis XIV and royal palace from 1682 to 1789, when the monarch was forced to return to Paris. The first design of the castle was made by Philibert Le Roy and during the next two centuries there were four building enlargements and renewals, when Louis XIV reorganized the government of France and moved there, when the court was fully established on May 6th 1682. The centre of the power was within the palace walls, where the government offices and the thousands of courtiers lived. By obliging the nobility to spend some time every year in Versailles, the king prevented the development of regional powers, and established the etiquette which was rendered famous and copied all around the European court.

Baroque art, an introduction – Smarthistory Gian Lorenzo Bernini, View to Cathedra Petri (or Chair of St. Peter), 1647-53, gilded bronze, gold, wood, stained glass (Apse of Saint Peter’s Basilica, Vatican City, Rome) (photo: Steven Zucker, CC BY-NC-SA 2.0) Rome: From the “Whore of Babylon” to the resplendent bride of Christ When Martin Luther tacked his 95 theses to the doors of Wittenberg Cathedral in 1517 protesting the Catholic Church’s corruption, he initiated a movement that would transform the religious, political, and artistic landscape of Europe. For the next century, Europe would be in turmoil as new political and religious boundaries were determined, often through bloody military conflicts.

Museums of the World Reviews An Apple Virtual field trip selection. Museums of the World gives you free access to thousands of museums around the world. It’s designed to give you up-to-date information about museums, exhibitions and other cultural events in your city and across the world. This easy to use and professionally designed application is a must-have for art and culture lovers, travel aficionados and all those who want the right information instantly in the palm of their hand! With Museums of the World you can find museums, exhibitions and events near you based on your GPS location and use Maps navigation information to find them. Sarah Yeoman - Work Zoom: Philadelphia Story Sarah Yeoman Philadelphia Story Recent Works Latest Blog Posts Upcoming Events History of Western Art: Renaissance to Revolution, 1300 – 1800 Who was Leonardo da Vinci? Who were the great female artists of the Baroque? What role did art play in the French Revolution?

Haiti artists forge int'l reputation with art made of junk PORT-AU-PRINCE, Haiti – Amid a maze of car repair shops in Haiti's gritty capital, Andre Eugene pitches a shredded tire he found atop a towering sculpture he built out of rusty engine parts, bed springs and other cast-off junk. "This is what I do: I work with the garbage of the world," says Eugene, assessing the largest sculpture displayed at the entrance of his studio and open-air museum off a crumbling street cutting through some of Port-au-Prince's poorest neighborhoods. The Haitian sculptor is a founding member of Atis Rezistans, a shifting collective of artists who recycle whatever useful scraps they can find to give a raw, physical shape to the spiritual world of Voodoo, or Vodou as the religion is known by Haitians, and weigh in on the country's chronic political and economic troubles. Over the last decade, the work of Atis Rezistans has been exhibited in cities such as Paris, London, and Los Angeles. But it's not all darkness.

Brooding Seascapes and Marine Vessels Painted by Justyna Kopania Polish painter Justyna Kopania depicts melancholy seascapes and towering ships obscured by mist with liberal applications of oil paint. Crashing waves are depicted with splashes of paint, and sails are formed with the stroke of a palette knife. You can see more over on Saatchi Art and Facebook. (via MEERESSTILLE) Art and the Evolution of Consciousness — Eros & Kosmos Allan Combs California Institute of Integral Studies acombs@ciis.edu The eye sees only what the mind is prepared to comprehend. — Henri Bergson