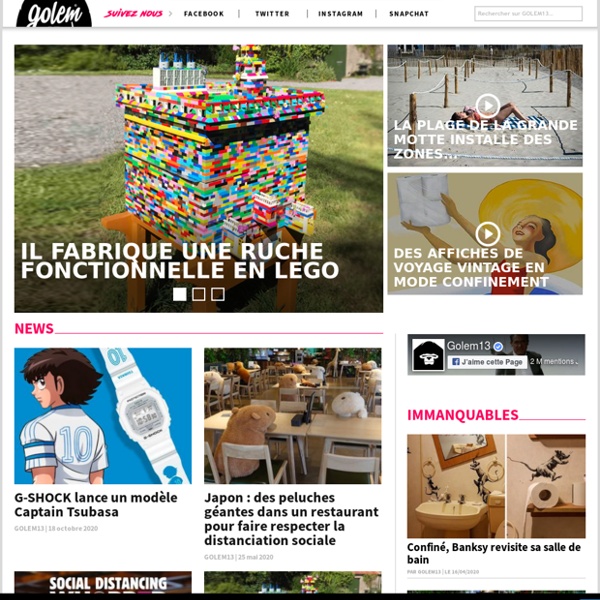 Geometric Sand Sculptures by Calvin Seibert «TwistedSifter Nov 27, 2012 Using a variety of 3D geometric shapes such as prisms, pyramids, cylinders, spheres and cones; artist Calvin Seibert creates wonderful sand sculptures that are not quite ‘castles’ but much more than just randomly placed building blocks. On Flickr, you can find an entire 66-picture gallery of Calvin’s artwork which have all been washed away by the sea.

An Architecture Student Bought a Bus and Turned It Into This Beautiful Creation. Wow. Hank Butitta is an architecture student who needed a project for his thesis. So he came up with the idea to buy and convert a bus into a home. The goal was to strike a balance between being affordable, livable and mobile. After construction, he took it for a spin on a 5,000 mile road trip, showing people it’s possible to live in a smaller footprint and use space efficiently. Like Us on Facebook Interesting Facts and Fun Facts Anatidaephobia is the pervasive, irrational fear that, somewhere in the world, a duck is watching you. The person believes that no matter where they are or what they are doing, a duck is watching them. The people who suffer from this phobia have suffered some sort of trauma in their lives, likely when he or she was a child. This trauma probably had to do with a duck or some sort of related water fowl, like a goose.

SketchUcation Community Forums Pilou wrote:"à la main" I think that'à la main' = by hand - you deliver a document by hand [i.e. it is in your hand] OR 'fait à la main' = hand-made [in English this phrase is normally reserved for things like food, clothes, furniture etc, but not in the general sense of 'manually' (manuellement) which is often used as the opposite of 'automatically'] - 'à la main' is a general usage and can be used in many case without misinterpretation, as it literally means 'at [the] hand' - so it is often used regarding anything relating to 'hands', BUT then'par la main' = by [the use of the] hand - you make a SKP mesh by hand - in the sense that you 'made it with your hand[s]' ['manually'] rather than making it ''automatically, perhaps using EEbyRails or Fredo's new gizmo [ you are unlikely to leave it at home ]etc etc

Get a Load of This Office's Winding, 1,100-Foot 'Superdesk' - Office Spaces Monday, February 17, 2014, by Spencer Peterson Photo via My Modern Met In the new Manhattan office of the Barbarian Group, an interactive marketing firm founded in 2001, all 125 of the agency's NYC-based employees share a single desk, and no, it isn't due to some Kafkaesque cost-cutting move or a perverse, competition-inducing game of musical chairs. The place has a fun-looking layout made possible by 'Superdesk,' Clive Wilkinson Architects' latest attempt at redefining workplace design, an 1,100-foot surface that snakes its way around the space in a long unbroken loop, with seven archways that create semi-private nooks for meetings and collaborative projects. It's been a long road to open-office Shambhala, not without head-scratching moments and potential pitfalls, and the view sure is fine.

CmapTools - Documentation The CmapTools documentation is organized as a Knowledge Model composed of concept maps and associated resources, constructed with CmapTools itself. The following is a categorized list of the Cmaps in the Knowledge Model, for direct access. Home Cmap for the Site Wonderful Machine Photography Blog Wonderful Machine More Are you a photographer? FOLLOW BY EMAILBlog