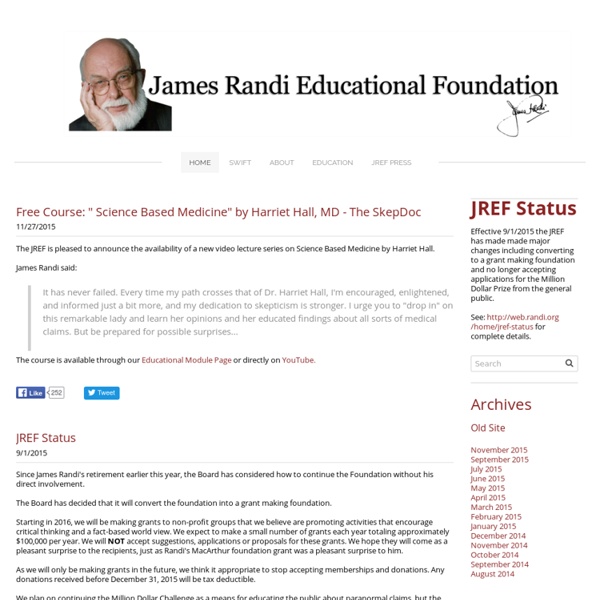 Planet of the Apes POSTED: Sunday, September 30, 2012, 12:34 PM Peter Andolfatto One of the more difficult aspects of evolution for some people to swallow is the notion that random copying errors in DNA can add up to anything useful. Managing Negative Online Comments By: Gini Dietrich | October 13, 2011 | It’s Facebook question of the week time (clap, clap, clap!). A few housekeeping things first. If you’re going to PRSA this weekend/next week, leave me a comment so I can say hi! And, Inside PR (Martin Waxman, Joe Thornley, and I) are hosting a TweetUp on Monday night.

Quackcast A podcast review of Quacks, Frauds and Charlatans. Oops. Thats not right. Bad Astronomy Well now, this is an interesting discovery: astronomers have found what looks like a "super-Earth" – a planet more massive than Earth but still smaller than a gas giant – orbiting a nearby star at the right distance to have liquid water on it! Given that, it might – might – be Earthlike. This is pretty cool news. We’ve found planets like this before, but not very many! Ology List - List of -ology Sciences and Scientific Disciplines Updated November 12, 2015. An ology is a discipline of study, as indicated by having the -ology suffix. This is a list of science ologies.

Why is it OK to to be prejudiced against Mormons? I have a dear friend who grew up in Utah and teaches at a major east coast university. When she first arrived at her job, a colleague asked her if she was a Mormon. She said yes. Merseyside Skeptics Society Skeptics with a K Skeptics with a K is the official podcast of the Merseyside Skeptics Society. Each episode features Mike, Marsh and Alice chatting about stuff that interests them, often with a skeptical angle. Subscribe via RSS |Subscribe via iTunes How To Sell Magic Beans One of the eternal questions for skeptics is – how can some people be so gullible? We have a standard answer which captures many of the factors: poor understanding of science, lack of an innate sense of probability, all the various mechanisms of self-deception, and the strong desire to believe in certain things. Further, some cons are just slick, and anyone can be fooled by a clever-enough deception. But still, there are some claims that are so astoundingly gullible it’s difficult not to face-palm when confronted by them.