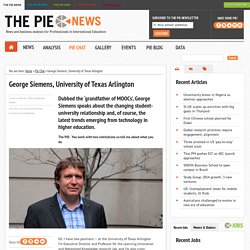 Published by Convergence Academies, I recently came across this infographic on learning theory on the most excellent blog, TeachThought. 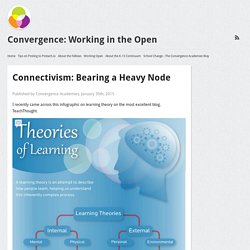 Connectivism: Its place in theory-informed research and innovation in technology-enabled learning. Special Issue - Connectivism: Design and Delivery of Social Networked Learning Frances Bell University of Salford, United Kingdom Abstract The sociotechnical context for learning and education is dynamic and makes great demands on those trying to seize the opportunities presented by emerging technologies. 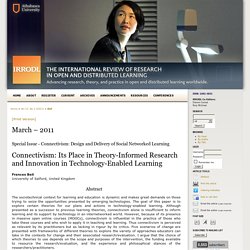 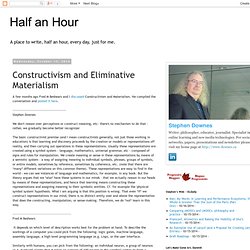 In the field of online sharing and learning, the “Massive Open Online Course” (“MOOC”) has received a lot of attention. 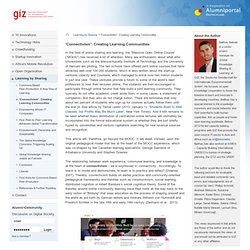 Many are enthusiastic about what elite universities such as the Massachusetts Institute of Technology and the University of Harvard are piloting. The two schools have offered joint online courses that have attracted well over 100,000 students. Much is also written about the start-up ventures Udacity and Coursera, which managed to enroll over two million students in just one year. Learning and Connectivism in MOOCs. Learning and Connectivism in MOOCs. Beyond Institutions Personal Learning in a Networked World. KnowingKnowledge_LowRes.pdf. 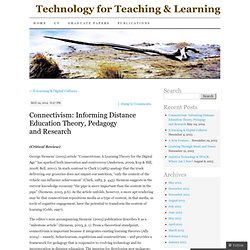 In stark contrast to Clark’s (1983) analogy that the truck delivering our groceries does not impact our nutrition, “only the content of the vehicle can influence achievement” (Clark, 1983, p. 445), Siemens suggests in the current knowledge economy “the pipe is more important than the content in the pipe” (Siemens, 2005, p.6). ~ Stephen's Web. Connectivism, as I describe it, suggests that there are different types of knowing networks. 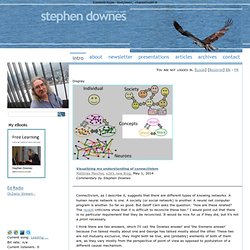 A human neural network is one. A society (or social network) is another. A neural net computer program is another. So far so good. But Geoff Cain asks the question: "how are these related? I think there are two answers, which I'll call 'the Downes answer' and 'the Siemens answer' because I've talked mostly about one and George has talked mostly about the other. The Siemens answer is multimodal extension. The Downes answer is pattern recognition (yes yes I know William Gibson wrote a book of that name, and that the concept is widely discussed by others). Why Connectivism is a Learning Theory. David Wiley recently made a comment on his blog, in response to a very succinct posting by Stephen Downes, that the learning theory Connectivism, though he is sympathetic to it, was incomplete. 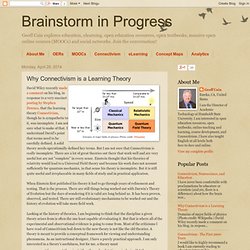 I am not sure what to make of that. I understand David's point that terms need to be carefully defined. An interview with Canadian MOOC pioneer George Siemens. George Siemens, Canada’s MOOC pioneer, opens up about where the movement is headed. by Rosanna Tamburri In 2011, renowned Stanford University professor and Google executive Sebastian Thrun launched his now famous, free online course on artificial intelligence, attracting a whopping 160,000 students worldwide and vaulting higher education onto the front pages of major international newspapers. 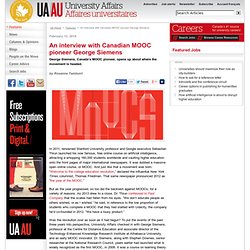 It was dubbed a massive open online course, or MOOC. And just like that a movement was born. “Welcome to the college education revolution,” declared the influential New York Times columnist, Thomas Friedman. But as the year progressed, so too did the backlash against MOOCs, for a variety of reasons. Was the revolution over as soon as it had begun? Dr. University Affairs: When we spoke a year or so ago the MOOCs phenomenon was just starting to snowball. Dr. University Affairs: Dr. Dr. Dr. University Affairs: Since Dr. Dr. Konnektivismus – die Lerntheorie für das Lernen in medialen Welten? ← Nils Friedel. Wer sich mit dem weiten Feld von eEducation auseinandersetzt, der stößt immer wieder auf den Konnektivismus. 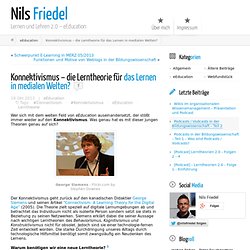