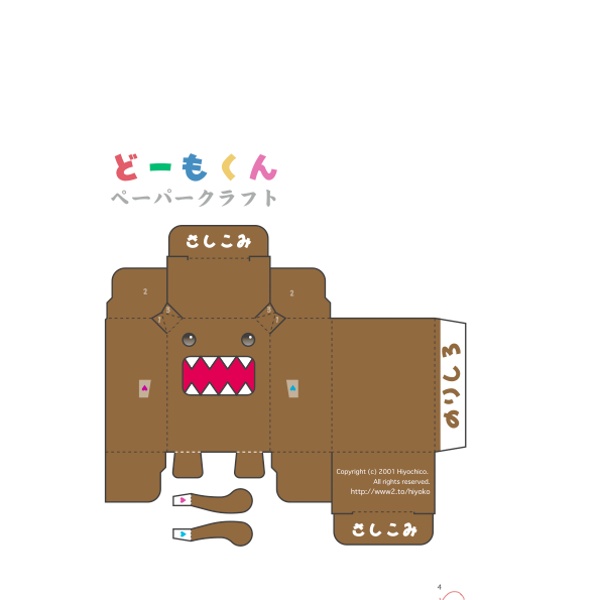 10 Anime Series To Watch! // Also available in French With a huge amount of anime series produced each year in Japan, it’s easy to be lost! You’re wondering what you should watch, this list will help you out: • Plot: Female cyborg Major Motoko Kusanagi and her fellow police officers of Section 9 hunt down a host of criminals in both the real and online worlds. How to win Rock-paper-scissors every time I admit it. When I first heard there are actual tournaments for Rock-paper-scissors, sanctioned by the World Rock Paper Scissors Society, I laughed. I mean seriously, $50k to the winner of a game that requires no skill whatsoever? DIY: Furniture Makeovers I'm obsessed with making-over old, worn out furniture. It's amazing how almost any old piece can be totally transformed with new paint, hardware and a little imagination! Here are three examples from Ladies Home Journal...click here to read the entire article. Out-dated side table with stone top transformed into a bright and cheerful accent piece! *First they removed the hardware and stone top, sanded the table all over, and applied a coat of primer.

Action Games Description **8/24 2PM ** Multiplayer Server back up! Thanks for your patience :). Dyatlov Pass incident The Dyatlov Pass incident (Russian: Гибель тургруппы Дятлова) is the mysterious deaths of nine ski hikers in the northern Ural Mountains on February 2, 1959. The experienced trekking group, who were all from the Ural Polytechnical Institute, had established a camp on the slopes of Kholat Syakhl when disaster struck. During the night something made them tear their way out of their tents from the inside and flee the campsite inadequately dressed in heavy snowfall and sub-zero temperatures. Soviet investigators determined that six victims died from hypothermia but others showed signs of physical trauma. One victim had a fractured skull while another had brain damage but without any sign of distress to their skull.

The Dalai Lama’s 18 Rules For Living May 6, 2011 | 42 Comments » | Topics: Life, List At the start of the new millennium the Dalai Lama apparently issued eighteen rules for living. Since word travels slowly in the digital age these have only just reached me. Here they are. Meaninglessness MEANINGLESSNESS and EXISTENTIAL DEPRESSION "It is here that we encounter the central theme of existentialism: to live is to suffer, to survive is to find meaning in the suffering." - Victor Frankl Talk about it: info@livereal.com What's the point? We all get up in the morning, go to bed in the evening, eat, sleep, work, eat, sleep, and work, day after day after day, but . . .

how to easily delete your online accounts Spring Financial is a finance company based in Canada. The company was founded in 2014. Spring Financial is a subsidiary of Canada Drives, which is a leading auto financing company in Canada. The Chief Executive Officer is Michael Galpin. The Director is Cody Green. tampabay.com & the St. Petersburg Times - StumbleUpon It's almost time for college students to begin fall classes, so I thought it would be good to compile a list of gadgets for college dorms and apartments. The obvious ones, like smartphones, laptops, iPads and calculators aren't listed here because I went for the fun and unique gadgets instead. Take a look and let me know if you've found something cool that should be included. (Scroll to the bottom to see a video that demonstrates the gadgets.) 1.

Health Tips - Home Remedies That Work at WomansDay.com - Womans Day - StumbleUpon Nobody is naysaying the wonders of modern medicine—what would we do without a medication like penicillin to treat infections? But, as it turns out, everyday items have secret curing powers, too. Next time you don’t want to fork over money to get a common wart removed, consider using duct tape. Already popped two aspirin but can’t get rid of the headache?