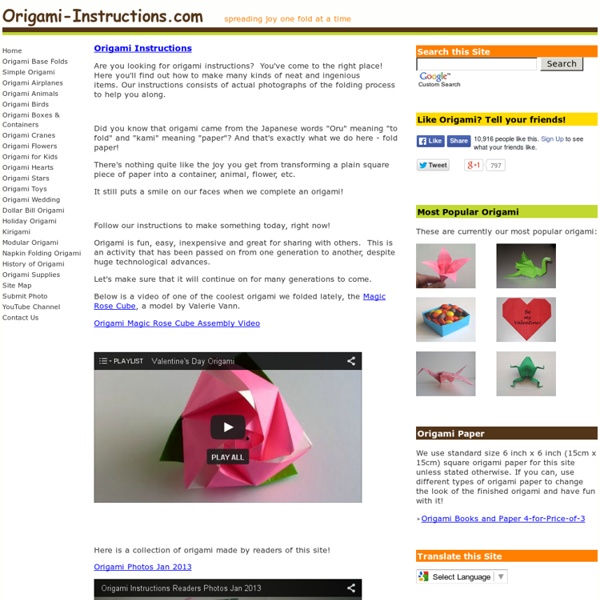 Are you looking for origami instructions? You've come to the right place! Here you'll find out how to make many kinds of neat and ingenious items. Our instructions consists of actual photographs of the folding process to help you along. Did you know that origami came from the Japanese words "Oru" meaning "to fold" and "kami" meaning "paper"? And that's exactly what we do here - fold paper!

Kusudama Tutorial part 1 The Japanese kusudama is a paper ball made out of multiple identical origami shapes glued together. They were traditionally used as a ball for incense or potpourri but now we see them more for decoration or as a gift. Today I am showing you part 1 on how to make the Japanese traditional shape. There are many different patterns to make a kusudama ball but I find this the easiest pattern to get started. Origami Magic Box Folding Instructions This origami box can easily convert from a flat square to a box and back to a flat square like magic! There's a video that shows the transformation at the bottom of this page. Made this origami? Comment and Submit your photo using the comment box at the end of this page! Origami Magic Box Step 1: Start by folding the origami 4-pointed star.

KCP International The seaside has always had an allure for people with its rolling waves, sandy beaches, and countless interesting creatures. Many origami creators have been inspired to make designs that are reminiscent of the sea and its inhabitants. Here are three sea-inspired origami designs that are cute and easy to make: Origami Fish This puffy origami fish seems to look like pufferfish or fugu. This would look fantastic in paper of any color or pattern. Penultimate Modular Origami James S. Plank plank@cs.utk.edu 3D paper diamonds Hello there. Hope you all had a great Easter! We had a lovely relaxing holiday (….well as relaxing as it gets with kids). It would have been great to have another week off ^_^

Video on How to Make a Kusudama With the Carambola Flower by Carmen Sprung This Kusudama can be considered modular origami, and it is based on a beautiful flower model, folded from a pentagon and originally created by Carmen Sprung (Germany). She calls it “carambola” perhaps because of its resemblance to a cross section of a carambola –also known as star fruit. On her website, Happy Folding, Sara Adams (Germany) presents a video showing how to make a pentagon and how to fold the origami carambola. The folding process, as Sara demonstrates, is both easy and pleasing. The Kusudama structure is that of a dodecahedron and made with twelve pentagonal flowers. It can be used as a holiday decoration or given as given as a handmade Christmas gift.

Modular: free diagrams instructing you how to fold modular origami models. These modulars are made available by the origami community at large. If you have a model that you would like to share, or if you see your model here and would like it removed, please Contact Us. Diagrams are intended for personal use. Copyright of the models lie with the origami creators and designers. Please contact the designer and/or creator directly for non-private usage of a model and/or artwork. Origami for Everyone Welcome to my homepage about Origami, the ancient art of folding paper. I hope that I can offer everyone, no matter if on beginner or advanced level, some of the joy I have got from this art. If you have any feedback you can write it into my guestbook or send me an email to gerwin AT scarygami DOT net.

Paper Helicopters Anyone can make paper airplanes, but how many people can make paper helicopters? You'll soar to new heights once you create these paper flying machines. These paper helicopters for kids are so simple and are great to do by yourself or with a group of your friends. Galaxy de l'origami étoiles When my 5 yo goddaughter and I meet up, we love to hand each other our little handmade somethings. She would shower me with sweet girly drawings, scribblings, love notes, masks or a surprise “masterpiece”. Godma would usually make origami iconic symbols. Not long ago I made her a galaxy of stars, one of her favourite shapes. I have complied a list of what I had made to share with you the wonders of star origami. The names of the first 4 stars are given by me as they don’t seem to have formal titles, so I took the liberty to describe them according to what they represent to me, hence they are by no means official.

www.origamee.net/diagrams/cubes/meecube4.html Whirl Cube Copyright © 2000 by M. Mukhopadhyay. All rights reserved. TreeMaker Background In 1989, I wrote an article for the magazine Engineering & Science about the state of technical folding, which, even then, seemed to be progressing by leaps and bounds due to an infusion of scientific and mathematical principles. In recounting some of the connections between origami, math, and technology, I wrote: Computing succumbed to the appeal of folded paper when, in 1971, Arthur Appel programmed an IBM System 360 computer to print out simple geometric configurations at the rate of more than one hundred a minute.

Empress and Emperor Origami for Girls' Day- Hina Matsuri 1a. Cut out image along outer solid lines. b. With printed side facing down, fold up on line A. 2a. Fold diagonally on line B. b.