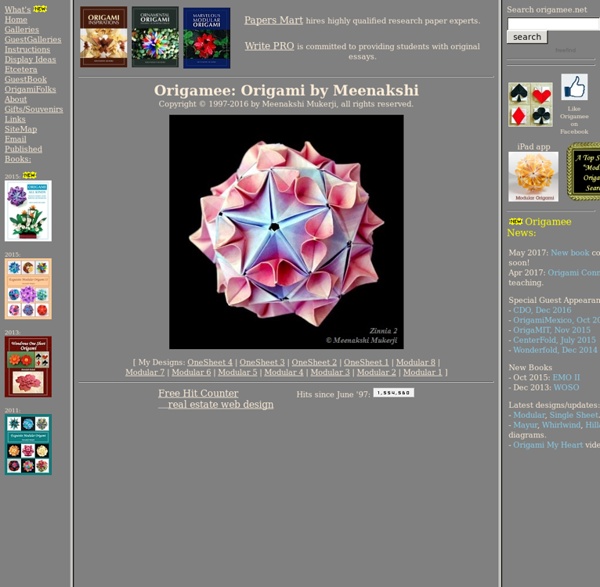 Modular Origami Diagrams « Flotsam and Origami Jetsam Oh St. Patty’s day is near!!! For many (I am only speaking of Chicago, cause that’s what I know) it is special day celebrated in any place that serves alcohol, by the Green Chicago River, or at the parade. In honor of such a green holiday I am posting triangular pyramid tip box instructions and a Celtic cross modular (In deference to it being the holiday of a saint and all.) The tip box is made from a bill and closes. The modular is of an almost identical unit that an Italian folder, Franco Pavarin, published, with one difference. Tip Box Instructions 1. 2. 3. 4. 5. 6. 7. 8. 9.

My Crafts (JeN) - AsianFanatics Forum Sammeh, on Mar 5 2006 9 05 AM, said: I like the purple swan, it has a shimmer to it. Or maybe it's just because I'm not wearing my glasses =\. Anyways, good job! I just noticed those straw flowers. some of the pictures are taken with my cellphone (like the purple swan, but it was made with nice shiny papers) JeN Sacreble, on Mar 5 2006 9 27 AM, said: wow this is impressing...really shows that you like to do stuff.. I tried to make a swan like yours one time...and got tired after halfway.. hey ! About the straw flowers, it isn't that hard, maybe at start ! ' it's finger killing lolz ! Hey everyone i just added few stuff ! From wat i have found but no time to do it !! JeN !

www.origamido.cz VRML Models of Modular Origami Modular Origami VRML Models Modular origami involves folding several identical or similar pieces (called units), which are then joined, usually without glue. Although I prefer single-sheet origami, some modular models are extremely attractive and elegant, not the least in the mathematical sense. Most modular units are fairly simple to fold; however, assembling some models can be quite difficult, since some units cycle or "penetrate" one another. Static diagrams and pictures are often not enough to solve placement ambiguity; in this case, assembly is greatly eased if a finished model is available for reference. These VRML ("virtual reality") models are intended as an aid to folders who didn't yet finish or don't have at hand a "real" instance of those remarkable origami creations. If your browser shows the models as text, you might have to install a plug-in or separate viewer. Copyright © 2002 Carlos A.

Mauro Origami Diagrams Models My Stars Origami: stella19 Hikaru Chan Origami paper - schematics, instructions, step by step assembly of origami If you have any trouble with the folding of any of the figures, origami, refer to the section symbols, and basic shapes. Most of the schemes basically have some basic form, because to succeed need to learn these basics. The simplest figures for folding figures are presented in different sections (boxes), dolls, thimbles. If you do not have experience, start with the development of basic figures, gradually complicating the task - refer to the section transport and try to lay down their figures ship and boat. For the organization of home theater, see the section dolls, thimbles. To make the scenery, please see the nature. Origami history of occurrence. Translated from the Japanese "origami" means "folded paper" in the land of the rising sun art of origami is called the art of an entire sheet. Origami appeared almost immediately after the appearance of paper in Japan. The word "paper" and "God" in Japanese tune. History of the development and dissemination of origami. Legends about origami.

Origami Pictures Weekly Origami I'm sorry, but the page you're seeking does not exist. Perhaps you can find what you're looking for below. Tokunoshima: Where Turtles Swim and Whales Sing At first glance, Tokunoshima seems to have been left to do its own thing, neglected by tourists seduced by the crystal clear seas of the more well-known Okinawa, just 100 kilometers to the south. But underneath this seemingly unexciting place, Japan’s volcanic geology is plain to see, with underwater tunnels, overhangs, drop offs and all manner of other formations that provide a home to a range of marine life. Continue Reading » Eyelash Extensions in Tokyo from Pro Care Eyelash If you ask most women what makeup item they can’t live with out, I am going to guess that most will say mascara. Continue Reading » Cirque du Soleil Returns to Japan with Ovo Continue Reading » Channeling the 90s with Spring’s Top Trends The trees are drenched in sakura and pastels are decorating the retail windows. Continue Reading » Pure Cafe, Minami Aoyama