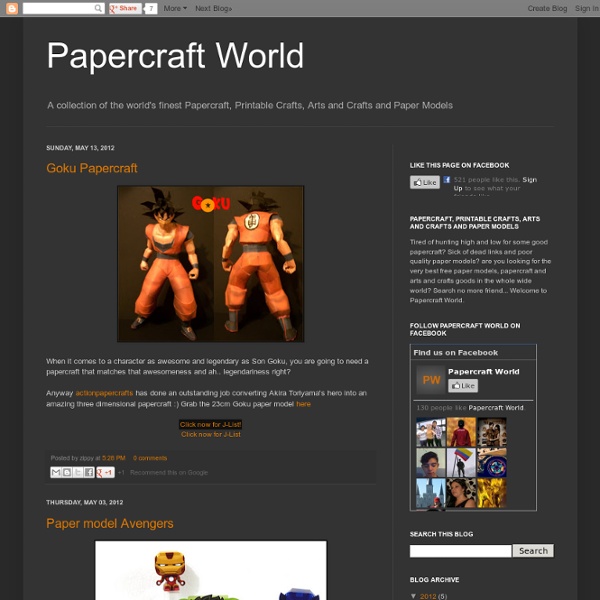 I know from personal experience how hard it can be to keep the little people in your life entertained, particularly if like me you live in a country where winter just seems to drag on and on. So I thought I would dig out some easy, fun and damn cute paper models for that crafty kid in your life. Hey even if they get bored and want to watch cartoons at least you have something to do rather than watching Toy Story for the 30th time that week. Piperoids Amazon has these great little robots called Piperoids, there are many different versions to collect, they are all high quality and each have a story behind them, excellent for teaching kids about constructing things themselves Animal Matching Puzzle made from paper of course!

Sonobe module Instuctions for making this model Below is the Sonobe unit, designed by Mitsonobu Sonobe, which I learned from Kazuyo Inoue. Above is the capped icosahedron which she made for me from this unit; you need to make about 30 units for this, but you only need six if you want to make a cube. Since this must be very well known, I'm only putting a very brief picture of how to make it. The second line of instructions gives a little more detail for the last step. Glue² chronicle News You can download from canon the "Orihime and Hikoboshi" paper model which I desighed. Oct 10,2013 I started a blog "gdgd chronicle" Hand-held Hubble - Paper Model, intermediate Difficulty: Somewhat difficult Durability: Low Detail: Moderate This intermediate-level paper model is made of cardstock and construction paper. It consists of about 30 pieces and can take approximately four to eight hours to build. This model is to scale and has more detail than the PVC model, including a three-dimensional optical telescope assembly equipment section. It is also easier to cut out and fold than the expert paper model. This model reflects the state of the telescope after Servicing Mission 3B, which took place in March 2002.

Papercrft Tokyo, Japan - If you’re a fan of the Star Wars series (or at least the first 3 films), and you’ve got an extra 41 hours on your hands, then have we got a project for you young jedi.This beautifully designed replica of an AT-AT was found in Japan by artist Shunichi Makino and is created entirely out of paper. It consists of 6 downloadable pdf files. Each is extremely detailed and scaled perfectly. We’re throwing down the gauntlet with this one. Put your own together and send us a photo. Origami is amazing - the traditional Japanese art or technique of folding paper into a variety of decorative or representational forms, as of animals or flowers. Origami is An Amazing Art now "origamoney"... koi carp butterfly

Paper Projects How to Make Paper! I been putting this project off for a long time because I thought it would be challenging. Wow I was wrong. The 7 Wonders of the Ancient World Did you know it would have been impossible for anyone to see all seven wonders of the ancient world? By the time the last wonder was built (The Colossus at Rhodes) others had already been destroyed. Of the seven only one remains standing today. The oldest wonder and only surviving wonder is the Great Pyramid of Khufu. FrankenPaper Fun Halloween paper craft! Download a Monster! Print-out, cut-out, glue, use as a holiday display or for pretend play! Perfect for Halloween or anytime you need a paper model monster friend! Dracula Free Paper Toy Bust! A new friend for you and FrankenPaper!

Flashback: Woven Map Basket Maps can be amazing design elements, with all their intricately drawn lines and minute details. But what do you do with a regular paper map that is starting to fall apart from use? In CRAFT Volume 05, crafter Jane Patrick suggested we weave maps into baskets, a fun and interesting way to reuse castoffs and weave a little memory into a functional item. Check out her full tutorial here and pick up a back issue of CRAFT Volume 05, the Paper issue, in the Maker Shed.Woven Memory Basket Weave your vacation road maps into an attractive souvenir. By Jane Patrick Think of basketry as three-dimensional weaving.

Glue² chronicle - paper doll my favorite guitarist Top hat, les paul, smoke of a cigarette, and voodoo tone. Ex-Guns N' Roses,and now Velvet Revolver guitarist Slash. Supposing only one person can take a guitarist to an uninhabited island? I answer slash promptly. There are many guitarists more skillful than he. However, there are not those who can imitate his play anywhere.