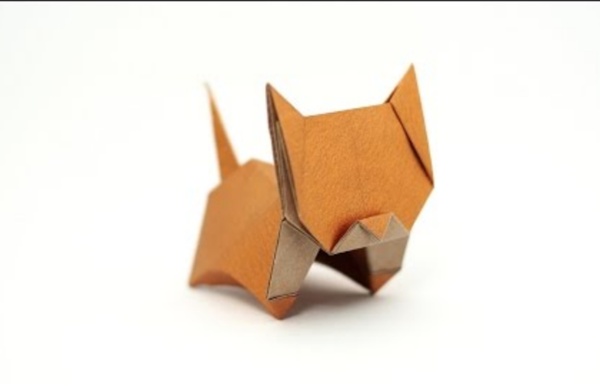 TUTORIAL: Origami Peacock 1000 Paper Cranes Backdrop A few weeks ago I introduced you to one of my lovely Brides Laura who was new to the Diary of a Boho Bride feature. You can read all about Laura’s wedding plans HERE . In Laura’s’ introduction I explained that she is a BIG fan of the old DIY and after a few emails and a few sneaky pictures of stuff she had already created, it was clear that she was an even bigger fan of DIY than I first thought. So a few weeks ago Laura came armed with a whole host of goodies to my house and we were joined by Jess from Jess Petrie photography who documented the whole thing. So here is the first fo Laura’s DIY tutorials, and for me the best one……….and yes she made all of those paper cranes herself, and threaded them altogether! I’ll pass the Blog over to Laura 1000 paper cranes backdrop What you will need • 1000 pieces of square paper. Instructions • Begin with your square of paper. • Unfold your last triangle and lift the back and front flaps up to flatten the triangle out into a square.

Paper Starburst Pendant Light So I had a different project that I was going to post today, an update version of my Book Pages Pendant Lantern from Project 19, but then I started working on this light idea, and I am so excited by the results I just couldn’t wait to show you guys! My inspiration and guide was this light from Design*Sponge, that I spotted on Pinterest. I really liked the idea, and I had a roll of white vellum lying around left over from college that I thought would look beautiful. So I started cutting triangles. And then I started glueing. The roll of vellum that I was using was 24 inches long. I think I glued the pieces on much closer than they did in the Design*Sponge tutorial, but I wanted a really full look. All in all I think the light is pretty awesome, and I can’t wait to post it on Etsy, though I’m a little bit worried about shipping. So I know I need to get back to my 30x30x3 projects, but this light took me by surprise with its shape and fantastic outcome, and I just couldn’t wait to share!

Origami Maniacs: Home The Educational Benefits of Origami By George Levenson Informed Democracy / Sadako Project Reprinted with permission of author Origami is the Japanese art of paper folding. It literally translates as ori (folding) gami (paper). In Japan, Children learn origami at their mothers' knees. Educational Benefits of Origami Behavioral Skills Cooperative Learning A Link to Math Cognitive Development Multi-cultural Awareness Community Building Behavioral Skills: Origami is an example of "schematic learning through repeatable actions". Cooperative Learning: Origami is well-suited to working with a classroom of 30 or more students. A Link to Math: Transforming a flat piece of paper into a three dimensional crane (or other origami figure) is a unique exercise in spatial reasoning. Cognitive Development: Through the actual folding, children use their hands to follow a specific set of steps in sequence, producing a visible result that is at once clever and pleasing. Multi-cultural Awareness: Reference:

How to make gift bags from newspaper When I bought something at a store recently, the clerk handed me my purchase in a bag made from a newspaper. I liked it very much and had to make some more—thus today's DIY recycled newspaper project: gift bags made from the Wall Street Journal. You can vary the dimensions, of course, but here's what I used to create a bag that's 5" tall, 4.5" wide, and 3" deep. Stack two sheets of newspaper on top of each other. This will be a two-ply bag for extra sturdiness. Cut out a rectangle that's 15.5" wide and 8.25" tall. Fold a flap 1.25" down from the top. Cut two pieces of cardstock or chipboard to 4.25" x 1", then glue them on the widest two panels just under the top fold. Put glue on the outside of the 0.5" tab and bring the left-most panel over to form the body of the bag, aligning the cut edge of the panel with the folded edge of the flap. Upend the bag so the 2" flap is now up. Put glue on both flaps and fold them inward to form the bottom of the bag.

Origami That's Fun And Easy Paper flower tutorial I thought some of you would enjoy a quick tutorial on how to make those little paper flowers I used as part of my table setting a couple weeks ago. The credit for these go to Martha Stewart (I saw this idea nearly 10 years ago in her magazine, but haven't been able to find it on her website). So here I go.. Step 1: Draw a spiral on a 4x4" square sheet of paper Step 2: Cut out spiral along lines you have drawn Step 3: Begin rolling up the spiral from the outside Step 4: Keep on rolling until there's no more left to roll Step 5: You're done! I used a slightly heavier weight paper for this one, but you can use normal paper as well. Note: You may use a bit of glue or double-stick tape to keep the flower from unrolling and loosening up with time.