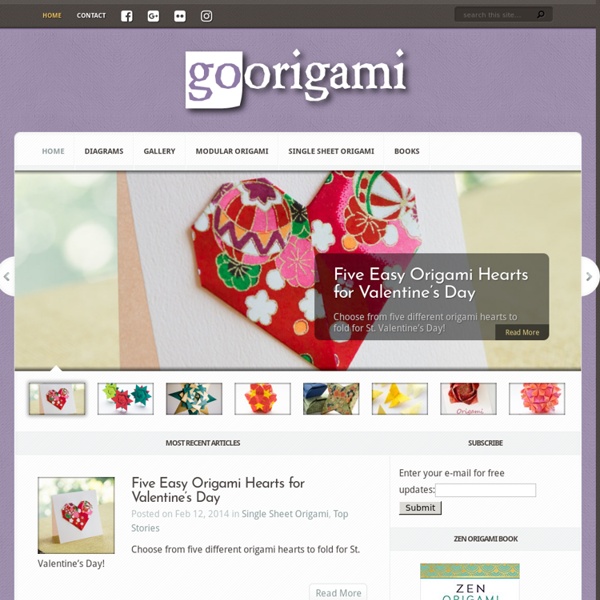 How About Orange Here's a look at our upstairs guest bathroom. Last night I covered an accent wall with removable wallpaper. I love it! This bathroom has a peculiar layout. You walk in past the shower stall on the right, and when you hit the sink, you turn right to get to the toilet. Sonobe The Sonobe module is one of the many units used to build modular origami. The popularity of Sonobe modular origami models derives from the simplicity of folding the modules, the sturdy and easy assembly, and the flexibility of the system. The history of the Sonobe module[edit] The origin of the Sonobe module is unknown. Two possible creators are Toshie Takahama and Mitsunobu Sonobe, who published several books together and both members of Sosaku Origami Group 67. The earliest appearance of a Sonobe module was in a cube attributed to Mitsunobu Sonobe in a Sosaku Origami Group book published in 1968, however it does not reveal whether he invented the module or used an earlier design: the phrase "finished model by Mitsunobu Sonobe" is ambiguous.

Fine and Feathered This weekend we finally got back to cleaning up the backyard. While we were cleaning up some of the trash (not from us, by the way!) I came across a gorgeous tree branch. I was totally one of those weird kids who collected every stone or stick that I thought was cool, and that hasn't really changed. I really had no idea what I would do with it when I saved it, but it hit me to combine it with a craft I was already planning to do with making candle holders - and I love how it came out! It's really simple to make.

-Diagrams — Page 2 A Christmas and holiday greeting to you, your families, friends, and loved ones. Today is the winter solstice in the Northern Hemisphere! From one of my south-facing windows, I can see the sun following its lowest and shortest arc across the sky. The good news is that for the next six months, the days will […] intro Folding Together The Folding Together Project "Slowly, my fear disappeared, because I came to know that they are exactly like us" -- excerpt from a child's Project diary Introduction The 'Folding Together' project brings together Israeli and Palestinian children from the Jerusalem area, to make origami.

Christmas Origami About EHO | Masthead | Financial Info | Contact Us | Writing for EHO | Get Your Product Reviewed Linking to this site | Advertise| Submit a Site | Reprinting Articles | Reviewing for EHO | Privacy | Search This website is Copyright ©1997-2010 Eclectic Homeschool Association, All rights reserved. This site was authored by Beverly S. Origami Tessellations Eric posing in front of work, exhausted but happy! My partner Ioana Stoian and I were invited as guests of honor for the Salon Résonance in Strasbourg, France last month. One of the requirements of our participation was the creation of a large installation piece, sized for a space about four meters by four meters (or about 150 square feet).