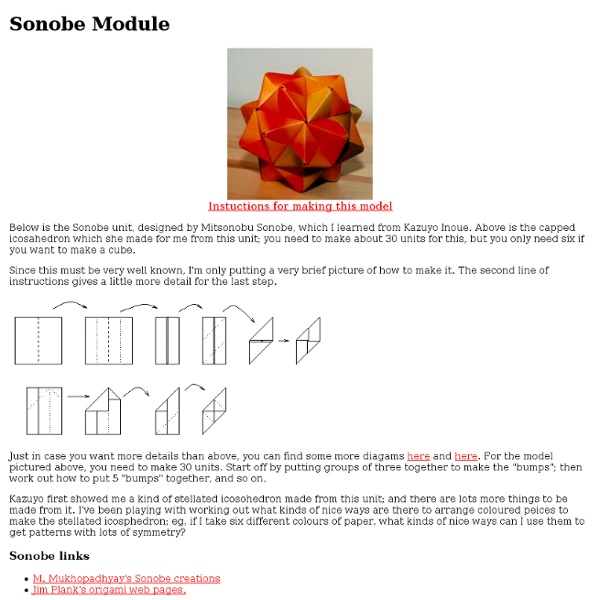 Instuctions for making this model Below is the Sonobe unit, designed by Mitsonobu Sonobe, which I learned from Kazuyo Inoue. Above is the capped icosahedron which she made for me from this unit; you need to make about 30 units for this, but you only need six if you want to make a cube. Since this must be very well known, I'm only putting a very brief picture of how to make it. Just in case you want more details than above, you can find some more diagams here and here. Kazuyo first showed me a kind of stellated icosohedron made from this unit; and there are lots more things to be made from it. Sonobe links Related:  Origami and Papercrafts • Sonobe Origami • Origami Sonobe

Platonic Solid The Platonic solids, also called the regular solids or regular polyhedra, are convex polyhedra with equivalent faces composed of congruent convex regular polygons. There are exactly five such solids (Steinhaus 1999, pp. 252-256): the cube, dodecahedron, icosahedron, octahedron, and tetrahedron, as was proved by Euclid in the last proposition of the Elements. The Platonic solids are sometimes also called "cosmic figures" (Cromwell 1997), although this term is sometimes used to refer collectively to both the Platonic solids and Kepler-Poinsot solids (Coxeter 1973). The Platonic solids were known to the ancient Greeks, and were described by Plato in his Timaeus ca. 350 BC. Schläfli (1852) proved that there are exactly six regular bodies with Platonic properties (i.e., regular polytopes) in four dimensions, three in five dimensions, and three in all higher dimensions. If 1. all lie on a sphere. 2. 3. 4. 5. Let (sometimes denoted ) be the number of polyhedron vertices, (or ) the number of faces.

Gilad's Origami Page - Wetfolding How-to guide - Minefield Fold the model as you usually do, but with one exception. In regular folding, you may be used to putting creases in using your fingernails: In wet-folding, don't put such strong creases. If you feel the paper starting to get dry and stiffen while folding, use the cloth or spray-bottle to add some moisture, but try to not over-do it.

Origami is amazing - the traditional Japanese art or technique of folding paper into a variety of decorative or representational forms, as of animals or flowers. Origami is An Amazing Art now "origamoney"... koi carp butterfly camera tank dragon crab shark spider scorpion toilet and of course a penguin.. Please visit stories, etc. for more pictures, stories, etc. VRML Models of Modular Origami Modular Origami VRML Models Modular origami involves folding several identical or similar pieces (called units), which are then joined, usually without glue. Although I prefer single-sheet origami, some modular models are extremely attractive and elegant, not the least in the mathematical sense. Most modular units are fairly simple to fold; however, assembling some models can be quite difficult, since some units cycle or "penetrate" one another. Static diagrams and pictures are often not enough to solve placement ambiguity; in this case, assembly is greatly eased if a finished model is available for reference. These VRML ("virtual reality") models are intended as an aid to folders who didn't yet finish or don't have at hand a "real" instance of those remarkable origami creations. If your browser shows the models as text, you might have to install a plug-in or separate viewer. Copyright © 2002 Carlos A.

Wet-folding Wet-folding bull Wet-folding is an origami technique developed by Akira Yoshizawa that employs water to dampen the paper so that it can be manipulated more easily. This process adds an element of sculpture to origami, which is otherwise purely geometric. Wet-folding is used very often by professional folders for non-geometric origami, such as animals. Wet-folders usually employ thicker paper than would usually be used for normal origami, to ensure that the paper does not tear. One of the most prominent users of the wet-folding technique was Éric Joisel, who specialized in animals, people, and mythological creatures such as fairies. The process of wet-folding allows a folder to preserve a curved shape more easily. Notes and references[edit] See also[edit] Papier-mâché External links[edit]

Flashback: Woven Map Basket Maps can be amazing design elements, with all their intricately drawn lines and minute details. But what do you do with a regular paper map that is starting to fall apart from use? In CRAFT Volume 05, crafter Jane Patrick suggested we weave maps into baskets, a fun and interesting way to reuse castoffs and weave a little memory into a functional item. Check out her full tutorial here and pick up a back issue of CRAFT Volume 05, the Paper issue, in the Maker Shed.Woven Memory Basket Weave your vacation road maps into an attractive souvenir. Materials 2-3 large road maps Contrasting string or thread Clothespins Cutting mat Rotary cutter Awl or tapestry needle Scissors Small tweezers White glue (optional) to further stiffen the basket Directions Step 1: Prepare the strips. Fold each strip in half lengthwise. Step 2: Weave over, under, over, under (plain weave) for a square base, 10 weavers in both directions. Step 3: Using string or thread, mark the base by twining around the edges.