Piano Chords and Scales made easy 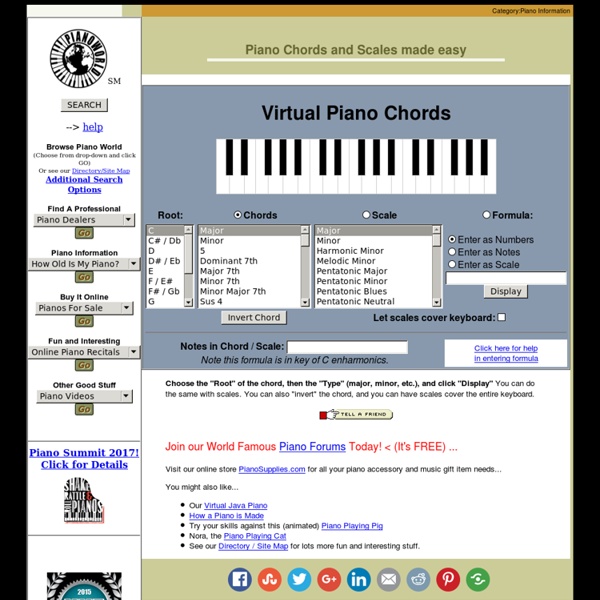 Akai MPK49 Pad Modification A few years ago I did a light review of the Akai MPK49 MIDI keyboard controller. Subsequently I bought one and I've been happily using it since. However one thing consistently bugged me (and everyone else) about the design - the drum "pads" are terrible. You have to hit them quite hard to even register a hit, let alone a loud one.

Sus Chords 1 - suspended chords sus7 chord - 7sus - sus4 - suspension - Bruno Pelletier The Sus chord-- generally written sus7 on Jazz charts (or 7sus, or 7sus4) baffles a lot of people. What do those 3 letters-- S-U-S mean ? Is it short for "suspicious", "suspenseful"? No. 5 Beautiful Ways to Play a II-V-I Jazz Chord Progression Photo by Ava Weintraub I just love figuring out different ways to play a jazz chord progression or just mixing up jazz chords with other styles of music. It can add nice flavors to a song and give it some extra magic. It’s really fun to experiment with that. Learning jazz expands your guitar vocabulary to a whole new level if you are ready for it. In the meantime it’s just fun to play some beautiful jazz chord progressions and it will certainly contribute to your playing skills and creativity as well.

21 Cool 3 Notes-Per-String Exercises to Rock On! Photo by Jsome1 Playing 3 notes per string exercises is something I do on a regular basis. I use them to warm up, to become a faster guitar player and to spice up my improvisation. 3 notes per string licks and scales are generally used for speed picking. eMusic expands MP3 store with Warner agreement eMusic is a solid place to purchase and download music. They've always had a great catalog of music that is "off the beaten path," as well as recordings of live performances. Their catalog is about to get even larger: eMusic has finally reached an agreement with Warner Music and will be adding around 10,000 new albums.

Key Chords Key Chords app generates guitar chord progressions automatically. Use it free online, or get the app for Mac, Windows or iOS (iPad) - Click on a chord to preview how it sounds. - Drag and drop to arrange the chord progression - Tweak the settings to control the playback speed Or role the dice and Key Chords will automatically generate a nice sounding progression. Select a Key: Finding Solid Confidence on Stage Photo by Niklas Hellerstedt As is our confidence, so is our capacity. ~ William Hazlitt When I first started out playing on stage I was quite a shy person. Sometimes I could be totally the opposite but many times I was just a wreck because of a lack of confidence.