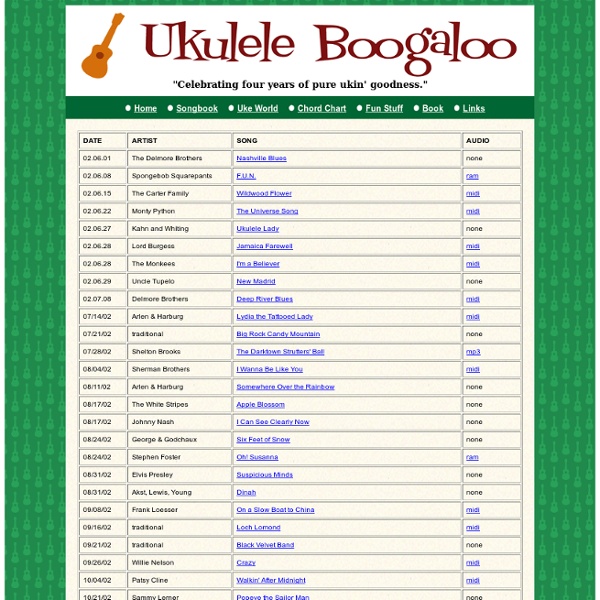 Crazy G Crazy G Here's a really fun song to learn. It's fast and showy, and audiences love it. It takes a little practice to play it well, but it's not as difficult as it sounds -- easily within the reach of any intermediate ukulele player. The first step is to download the tab notation for this song. It's a .pdf file, so you'll need an Adobe reader (it's free) to display and print it. Download the tab for Crazy G Here are a few pointers to help you master this song: The key is to keep your right hand moving in a very steady up-and-down strum. You'll notice that the rhythm is the same pattern repeated over and over again every two measures (the only exceptions are the last two measures of Lick #2 and the third measure of Lick #3). Another right-hand tip: Don't move your whole arm. You'll hear lots of variations of this song.

Index of Songs The songs in this index are listed alphabetically by last name. For songs whose names begin with the word "The," ignore the first word and alphabetize by the second word (for example, "Day That the Rains Came Down, The.") Back to Top

Chord Magic page 1 Chord Magic We're going to teach you how to play all of the chords (major, minor, 7th, diminshed, ...) in all of the keys (A, Bb, B, C, ...) in all of the positions (up and down the fretboard). The magic in "Chord Magic" is that you can do this without a lot of memorization. Let me show you what I mean. Think about the 7th chords for example. You can play an A7 chord at four different positions on the fretboard of a soprano ukulele (trust me on this for now – I'll show you how in a minute). Same for every other chord: to play all 72 major chords, you only need to learn four more patterns. Don't be intimidated by the length of this writeup. The ideas here are simple, and you'll pick them up pretty quickly. If you're already an advanced player, or if you've already got an understanding of some of these concepts, you can skim through this document: read the "Important Points" and the "Tips", and study the summary Fig. 21: How To Play All Of The Chords In All Of The Keys.

Accueil tablatures.tk - your ultimate FREE guitar pro tabs archive Blue Tail Fly "Blue Tail Fly," "De Blue Tail Fly," or "Jimmy Crack Corn" is thought to be a blackface minstrel song, first performed in the United States in the 1840s. It remains a popular children's song today. Over the years, many lyrical variants have appeared, but the basic narrative remains intact. On the surface, the song is a black slave's lament over his white master's death. The song, however, has a subtext of rejoicing over that death, and possibly having contributed to it by deliberate negligence.[1] Most versions at least nod to idiomatic African English, though sanitized, Standard English versions now predominate. Abraham Lincoln was an admirer of the tune, calling it "that buzzing song." When I was young I us'd to wait On the master and hand him his plate; And Pass down the bottle when he got dry, And brush away the blue tail fly. refrain (repeated each verse): Jimmy crack corn and I don't care, My master's gone away. An' when he ride in de afternoon, I foiler wid a hickory broom; Advertising

Scales page 1 Scales Let's look at how to play scales on the ukulele. Why? Well... The easy answer is that, like eating your vegetables, it's good for you. But there are also more substantial reasons. We're assuming some basic level of understanding of music theory here (not very much though, so don't run away yet!) We're not going to go into more exotic modes (if you don't know what a mode is, don't worry – we're not going there in this tutorial), we're just going to show you how to play major scales, with a brief paragraph at the end to talk a little about minor scales. The first scale to learn is the C major scale. Here are the notes of the C scale on a piano keyboard. Now, there are many ways to play a scale on the ukulele. Here's the most practical way to play the C scale on a ukulele. Now you may have noticed that the fifth note ("So", a G) is played on the E string third fret rather than the open G string. Here's that C major scale shown all at once on the fretboard: