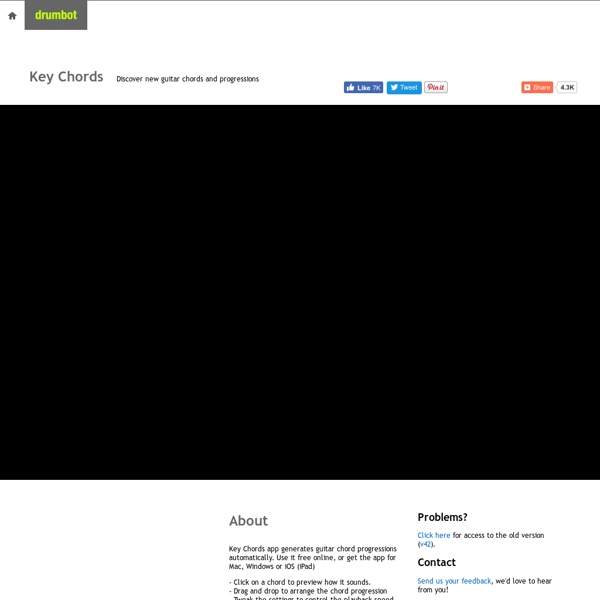 Key Chords app generates guitar chord progressions automatically. Use it free online, or get the app for Mac, Windows or iOS (iPad) - Click on a chord to preview how it sounds. - Drag and drop to arrange the chord progression - Tweak the settings to control the playback speed Or role the dice and Key Chords will automatically generate a nice sounding progression. Select a Key: Select a key and choose a the major or minor scale. The resulting chord chart will display applicable chords for the selected key. Click a chord: ... and you will hear a cheap computer generated guitar playing the chord. Drag & Drop: - Chords from the chart into the progression timeline. - Rearrange Chords in the progression. - Remove chords from the progression. Roll the Dice: ... and a random chord progression will appear in the timeline. The numbers below each chord in the progression refer to the number of "beats" the chord will linger for. The "Rake Speed" refers to the speed of a single "strum." The main chart areas.

Drum pattern sequencer Includes over 400 unique drum samples, spanning electro to real drum kits. Create beats, compose drum tracks and then save the results to WAV sound files for use in other projects or software. Enjoy! Two Play Buttons? The top play button is for the beat pattern you're working on. The pattern will loop. The Sacred Geometry Of Music The Sacred Geometry Of Music by Andrew Lorimer Music uses the laws of vibration to manifest aurally what exists at the center of everything. Into our reality springs a non-visual harmonic law that is universal. The notes and intervals of music speak directly to the chakra centers and causes them to vibrate in harmony to the vibration of a string or vocal chords, speakers moving through the air, or the sound of someone’s lips making a farting noise through a metal tube. Music uses the laws of physics and mathematics to bring out an emotional response in the listener.

seaquence :about Seaquence is an experiment in musical composition. Adopting a biological metaphor, Seaquence allows you to create and combine musical lifeforms into dynamic compositions. Go! How to play The way each creatures looks and sounds is determined by the step-sequencer pattern, and other parameters you can tweak including their audio waveform, octave, scale, melody, envelope, and volume.

Stories Behind David Bowie's Songs Over six decades on from his debut record (“Liza Jane” by his first group, The King Bees), David Bowie is arguably the most vital musician of his generation. Aside from his daring sonic explorations (in a little over the last decade alone, there was the drums ’n’ bass of Earthling and the innovative concept art of Outside), Bowie has diversified to pursue other interests (as far back as 1972 he said, “I’m not content to be a rock ’n’ roll star all my life”). In recent years he’s been an Internet service provider and web host, journalist, wallpaper designer, photographer, painter, actor and one-man corporation (in 1997, he became the first pop star to offer himself as a share issue, with “Bowie Bonds”). Bowie left this earth on January 10 after an 18-month battle with cancer. It was just two days after his 69th birthday and the release of a new album, Blackstar, which immediately shot to the top of the iTunes charts. You’ve been making records for over 50 years.

Scales and emotions See also a post about making chords from scales. So maybe you want to write a song or an instrumental in a particular mood or style, and you’re feeling overwhelmed by all the scales. Here’s a handy guide to the commonly used scales in Western pop, rock, jazz, blues and so on. Click each image to play the scale right in your browser with the aQWERTYon. P22 Music Text Composition Generator ( A free online music utility) The P22 Music Text Composition Generator allows any text to be converted into a musical composition. This composition is displayed in musical notation and simultaneously generated as a midi file. 1. Usage

6 Ways Drumming Heals Body, Mind and Soul From slowing the decline in fatal brain disease, to generating a sense of oneness with one another and the universe, drumming's physical and spiritual health benefits may be as old as time itself. Drumming is as fundamental a form of human expression as speaking, and likely emerged long before humans even developed the capability of using the lips, tongue and vocal organs as instruments of communication. To understand the transformative power of drumming you really must experience it, which is something I have had the great pleasure of doing now for twenty years. Greek Instruments ~ Greek Folk Music and Dance ~ John Pappas ~ Ioannis Pappayiorgas ~ Greek Dance Greek Music Klarino Bouzouki Greek Instruments Greek Clarinet This page consists of pictures and information on various Greek folk instruments. For more information about how the various instruments are used together in various regional styles, please visit my page on Greek folk instrument groups. The Three General Families Click on the jumplinks in the table below for more information on each particular instrument.

Boogie Nights: A History Of Funk In Dayton During the 1970’s, a new genre of music called funk was making its way into the American mainstream and Dayton, Ohio was at the epicenter. Community Voices Producer Basim Blunt says that more funk bands came from Dayton, than any other place in the world. This story is about the world famous funk bands that hailed from the city’s West Side, and one community’s attempt to honor their legacy before the music fades.