HubSpot Marketing Free. Film, TV & Commercials Production Companies and Services Directory. Same Day Business Card. There are no cards for the selected filter Starting at $0.00 Other themes for this design: "This feature works best in modern browsers. 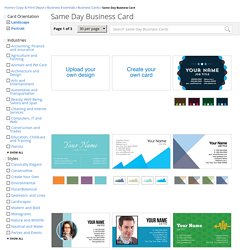 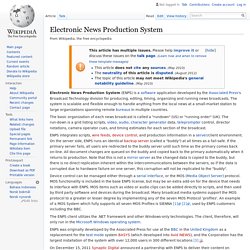 The system is scalable and flexible enough to handle anything from the local news at a small-market station to large organizations spanning remote bureaus in multiple countries. The basic organization of each news broadcast is called a "rundown" (US) or "running order" (UK). The run-down is a grid listing scripts, video, audio, character generator data, teleprompter control, director notations, camera operator cues, and timing estimates for each section of the broadcast.

Device control can be managed either through a serial interface, or the MOS (Media Object Server) protocol. MOS functionality is included in the base ENPS license, but may be an extra add-on for the device that needs to interface with ENPS. See also[edit] * EidosMedia External links[edit] Investor Presentation Template. Actual Full Bleed Cards. ‘Just Between Us’ Co-Host Dishes On Financial Hardships Of YouTube Success.

Two years ago, we published an article equating the then-current state of the online video industry to a gold rush. 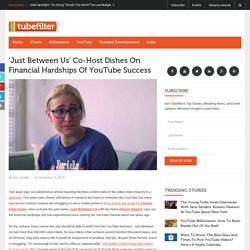 Two years later, there’s still plenty of money to be found on websites like YouTube, but many successful content creators are struggling to see a livable portion it. In an article she wrote for Fusion, Gaby Dunn--who co-hosts the web series Just Between Us with her friend Allison Raskin–lays out the financial hardships she has experienced since starting her YouTube channel about two years ago. On the surface, Dunn seems like she should be able to profit from her YouTube business. Just Between Us has more than 500,000 subscribers, its new videos often achieve several hundred thousand views, and its informal, vlog style seems like it would be inexpensive to produce.

Can You Make a Living on YouTube? If You're One of the Top 1000 Channels Making $23,000/Mo You Can. In the late 90s, it seems like everyone had a startup, but no one, especially the media giants, knew exactly how they were going to make money off this new thing called the Internet. 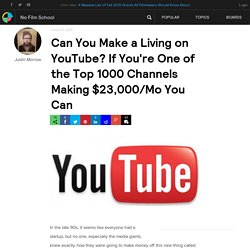 Would there be a machine next to your computer that accepted quarters, à la those massaging beds you see in movies but have never seen in real life? Would it come from subscription fees, like the old AOL model? It turns out the answer was ads, mostly, and with its model, individual users can earn quite a bit of money with their YouTube videos.

An infographic shows how at least one segment of the internet is making its scratch, moolah, bread, cab fare, etc. Click below to check out how much sweet, sweet money the top 1,000 channels are making! There really should be a B.Y. and an A.Y. This infographic from ad-agency MDG breaks down just many views the top channels are getting (surprise, many of them belong to big brands or musical stars) and how much revenue this generates. Healthy New York: Small Business Eligibility. Small Business Eligibility Reduced-cost health insurance is available under the Healthy NY program to eligible small businesses and their employees. 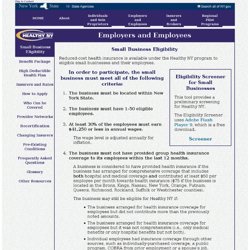 Eligibility Screener for Small Businesses This tool provides a preliminary screening for Healthy NY. The Eligibility Screener uses Adobe Flash Player 9 , which is a free download. Screener In order to participate, the small business must meet all of the following criteria: The business must be located within New York State. If the business meets the four criteria above and opts to enroll the business in Healthy NY, the employer must assure that: 50% of the eligible employees will participate in the program and at least one participant earns annual wages of $41,250* or less.