Robert Lang: The math and magic of origami 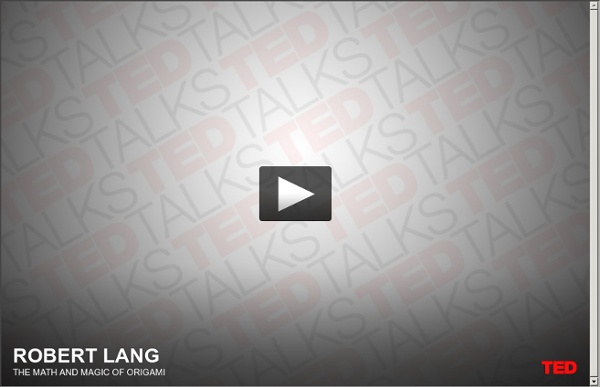 Assessing regression to the mean effects in health care initiatives The regression to the mean concept Regression to the mean was first described over a century ago by Francis Galton (later Sir Francis) upon discovering that, on average, tall parents have children shorter than themselves and short parents have taller children than themselves [25]. RTM is the result of both random measurement error and extremity of scores from the mean [26]. A simple example of this occurs in measuring blood pressure or heart rate. Rarely are any two observations identical, even if taken minutes apart, due to natural biologic variability or measurement error. Theory of Knowledge » Maths Mathematics This week we are starting the Maths unit! Remember to submit your Sciences reflection next week to your teacher – teachers will have specified their individual deadlines. Click INTRODUCTION TO MATHEMATICS Maths reflection

Decision support system A Decision Support System (DSS) is a computer-based information system that supports business or organizational decision-making activities. DSSs serve the management, operations, and planning levels of an organization (usually mid and higher management) and help to make decisions, which may be rapidly changing and not easily specified in advance (Unstructured and Semi-Structured decision problems). Decision support systems can be either fully computerized, human or a combination of both. While academics have perceived DSS as a tool to support decision making process, DSS users see DSS as a tool to facilitate organizational processes.[1] Some authors have extended the definition of DSS to include any system that might support decision making.[2] Sprague (1980) defines DSS by its characteristics:

Visual Processing: Cortical Pathways (Section 2, Chapter 15 The visual system is unique as much of visual processing occurs outside the brain within the retina of the eye. The previous chapter described how the light-sensitive receptors of the eye convert the image projected onto the retina into spatially distributed neural activity in the first neurons of the visual pathway (i.e., the photoreceptors). Within the retina, the receptors synapse with bipolar and horizontal cells, which establish the basis for brightness and color contrasts. BBC: Slideshow: The art of mathematics To the untrained eye, these vivid images might appear to be random sets of colourful swirls and circles. But they are in fact precise visual representations of mathematical theory known as dynamical systems. Some of the images - created by mathematicians from across the world - have gone on display at the University of Liverpool.

Expert system An expert system is divided into two sub-systems: the inference engine and the knowledge base. The knowledge base represents facts and rules. The inference engine applies the rules to the known facts to deduce new facts. Inference engines can also include explanation and debugging capabilities.[10] Tony Robbins UPW Explained, an NLP video analysis. Anthony J. Mahavorick, aka Tony Robbins is probably the most well known NLP student of all time. At one point in his truly remarkable career Tony was estimated to be worth $800 million and had an infomercial for his Personal Power product on TV somewhere in North America every 30 minutes. Tony learnt NLP back in the 80s and really did 'go for it' and apply what he learnt fully, fueling a career that went on to establish him and his "Mega" seminars as one of the top events to go to in the personal development world. He has coached or advised some of the top sports, business and politicians of our time.

From Fish to Infinity I have a friend who gets a tremendous kick out of science, even though he’s an artist. Whenever we get together all he wants to do is chat about the latest thing in evolution or quantum mechanics. But when it comes to math, he feels at sea, and it saddens him. How Khan Academy is using Machine Learning to Assess Student Mastery See discussion on Hacker News and Reddit. The Khan Academy is well known for its extensive library of over 2600 video lessons. It should also be known for its rapidly-growing set of now 225 exercises — outnumbering stitches on a baseball — with close to 2 million problems done each day. To determine when a student has finished a certain exercise, we award proficiency to a user who has answered at least 10 problems in a row correctly — known as a streak.

Infographic: See The Daily Routines Of The World's Most Famous Creative People We tend to imagine writers, painters, and composers burning the midnight oil, skipping meals, and working feverishly when true inspiration strikes. In fact, Tchaikovsky and Charles Dickens got plenty of Zs each night. Immanuel Kant made a point of visiting the pub every day. And Auden, Milton, and Beethoven kept precise work schedules.

The Hilbert Hotel In late February I received an e-mail message from a reader named Kim Forbes. Her six-year-old son Ben had asked her a math question she couldn’t answer, and she was hoping I could help: Today is the 100th day of school. Artificial intelligence community mourns John McCarthy 25 October 2011Last updated at 18:45 Artificial intelligence researcher, John McCarthy, has died. He was 84. The American scientist invented the computer language LISP. Linear regression Linear regression is one of the most basic, and yet most useful approaches for predicting a single quantitative (real-valued) variable given any number of real-valued predictors. This article presents the basics of linear regression for the "simple" (single-variable) case, as well as for the more general multivariate case. Companion code in Python implements the techniques described in the article on simulated and realistic data sets. The code is self-contained, using only Numpy as a dependency.

On the Nature of Mathematics One of the oldest of all fields of study is that now known as mathematics. Often referred to, used, praised, and disparaged, it has long been one of the most central components of human thought, yet how many of us know what mathematics really is? Many have likened it to a language, while others claim it is a science, and a few more an art. In truth, it stands in a category all by itself, yet it incorporates aspects of those three and more.