Guitar Technique and Warm Up Exercises with Tabs 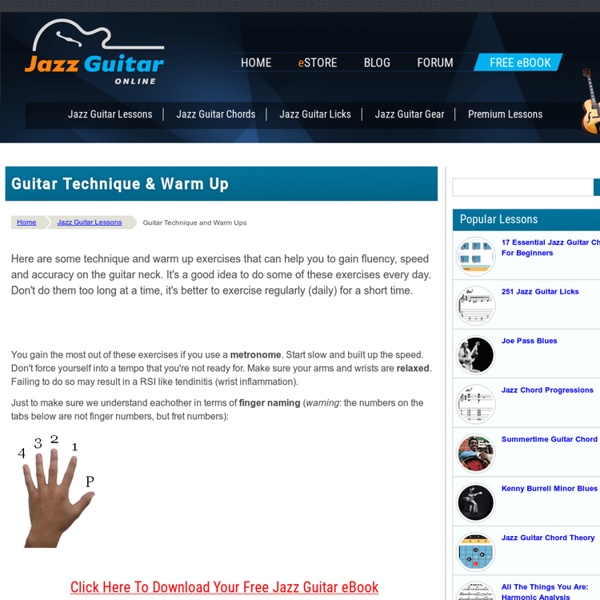 Here are some technique and warm up exercises that can help you to gain fluency, speed and accuracy on the guitar neck. It's a good idea to do some of these exercises every day. Don't do them too long at a time, it's better to exercise regularly (daily) for a short time. You gain the most out of these exercises if you use a metronome. Start slow and built up the speed. Just to make sure we understand eachother in terms of finger naming (warning: the numbers on the tabs below are not finger numbers, but fret numbers): Click Here To Download Your Free Jazz Guitar eBook Warm Up Exercises This first exercise helps to develop your fluency, speed and left hand-right hand coordination. The next exercise trains your individual fingers. String Skipping Exercises The following set of exercises train your picking abilities. This is one of bass player John Patitucci (if I remember it well). The next exercise uses the G major scale. Intervalic Guitar Scales In thirds: In fourths: In fifths: In sixths:

9 Songs Every Beginner Should Know Author Bio: * Plays for the band Your Name In Neon * Has been playing for 9 years * Has 3 years teaching experience * Is in love with the Beatles * Has been gigging for 7 years * Has a secret crush on The Bangles * Is a beginner specialist * Has been a session guitarist For the beginner guitarist, here is a list of 9 songs that are easily recognisable, easy to learn and will leave you feeling good after a run through. By learning the 9 songs listed below you will have covered some essential basics e.g. strumming patterns, string skipping with the plectrum, barre chords, single string riffs and leads. Strumming Songs 1. The song consists of four chords in the key of G major: G, D, Am7, and C. 2. Wonderwall is one of Oasis’s most popular songs and in 2008 it was 76th in the UK’s list of best-selling singles. 3. Blister in the Sun is a song by American rock band Violent Femmes, released on their 1983 debut Violent Femmes. 4. Introducing the F chord 4. 5. String Skipping Songs 6. 7. 8. Solos

Know Every Note on the Guitar in 9 Days Knowing every note on the guitar is a challenge unique to the instrument. A saxophone has only one way to finger each note, while a guitar usually has a few different strings and four fingers to choose from. String a few notes together and the permutations of how to play them will wreck your brain. Pianists have a similar problem with ten available digits, but you can memorize the notes on a keyboard in a matter of minutes; the same pattern of white and black keys repeats every octave. The challenge with navigating the guitar fretboard is its two-dimensional layout. Why Know the Whole Fretboard? If you don’t know every single note on the guitar cold, without hesitation, then I highly recommend taking a little time to get that under your belt. The primary advantage to knowing every note on the fretboard is in creation. If you haven’t started playing yet, come back to this after you’ve learned some music. Day 1: Open Strings Know your open strings like you know your alphabet. Conclusion

40 Helpful Links for Guitar Players I'm doing my best do save you some room in your bookmarks tab on your browser by compiling the 40 most helpful links and websites I've ever come across for guitar players. These aren't just gear or lesson sites, but sites that I've found to be helpful in other ways that I wouldn't have initially expected. So I'm passing the knowledge on to you. If you play guitar, every link on this page will be worth checking out or at least keeping handy for future use. I've included a quick explanation beside each link. 1. If you ever want to record guitar on your computer this is a free piece of software that will allow you to record any stream coming into your sound card. 2. Ceaser Huesca is a guy who got his start on YouTube and provides some of the most inspiring covers available. 3. Ever curious what kind of gear your favorite guitarist is using? 4. Here you'll find curated deals and bargains on guitar gear from reputable websites (none of the shady operations), updated every week day. 5. 6. 7. 8.

20 Tips On Songwriting Every songwriter goes through times when the inspiration just seems to dry up, and the perspiration doesn't seem to be working. Debbie Poyser offers some guidance. Songwriting is a skill that is rarely taught: musicians more often than not tend to write instinctively, absorbing their ideas about form and structure from the music that's around them, and relying on inspiration for their melodic and lyrical direction. 1. 2. 3. 4. 5. 6. 7. 8. 9. 10. 11. 12. 13. 14. 15. 16. 17. 18. 19. 20. Otomata - Online Generative Musical Sequencer 16 Jul 2011 Click on the grid below to add cells, click on cells to change their direction, and press play to listen to your music. Update: Click here to get Otomata for your iPhone / iPod / iPad! Official facebook page: Also this reddit page has many examples: And there is a subreddit for Otomata: Otomata is a generative sequencer. Each alive cell has 4 states: Up, right, down, left. at each cycle, the cells move themselves in the direction of their internal states. This set of rules produces chaotic results in some settings, therefore you can end up with never repeating, gradually evolving sequences. If you encounter something you like, just press “Copy Piece Link” and save it somewhere, or better, share it! Here is something from me to start with: And here is an action video: Here are replies to some common questions: Q: MIDI Output?

20 Very Useful Photography Tips And Tricks The summer is here so now is the perfect time to make a lot of photos. If you want to look like a professional photographer, then you must enhance your pictures. Take a look at this article because here you will find 20 very cool tutorials which will help you transform an average photo into a work of art. How To Make Digital Photos Look Like Lomo Photography In this article, the author will teach you how to create lomo photos in a very easy way. DIY – Create Your Own Bokeh Bokeh is an adaptation from a a Japanese word meaning blur. Make Pop Art from Your Photos If you are a fan of pop art and the work of Andy Warhol, then this is the Adobe Photoshop tutorial for you. How to Turn Humdrum Photos into Cinematic Portraits In this photography and Photoshop tutorial you will learn how to add drama or a cinematic quality to a regular, humdrum and boring portrait using a little bit of fake HDR. Convert to Black and White the Right Way Photographing Car Light Trails Coloring a black and white image

Electronic Music Theory: How to Quickly Write Better Chord Progressions w/ Pat Cupo A lot of students have asked me for tips and tricks to writing better chord progressions. By that time they had already learned about building Major and Minor chords, but when it came to a chord progression – a series of chords occurring in time – they were a bit stuck. If you’re ever in the same position, then feel free to use these simple guidelines to help you quickly write chord progressions. Follow them carefully and strictly at first and over time it’ll start to come naturally to you. 1) Use only Major or Minor chords. Just keep things simple. C Major [audio: Major Chord C Minor [audio: Minor Chord 2) Begin and end with the same chord The thing about music is that it’s like a game. [audio: Minor Chord So what chord am I going to end with? 3) Move freely among diatonic chords The word Diatonic means “from the tonic”. What’s Included:

Better Guitar - Guitar Songs You Should Learn. There are certain songs that every guitar player should try to learn. Either they are commonly requested or they have cool guitar parts that will expand your playing skills. I am going to list songs in several styles of music and explain why I think they should be add to your “play list.” While most are electric guitar songs, there are some acoustic songs also. Obviously, this type of list won’t ever be comprehensive, and no doubt, many will disagree with my choices — and find many ommissions. This is a huge list and will take most players years to complete (if ever.) Johnny B.