Exploring the impact of Apple's iPad on schools & schooling. 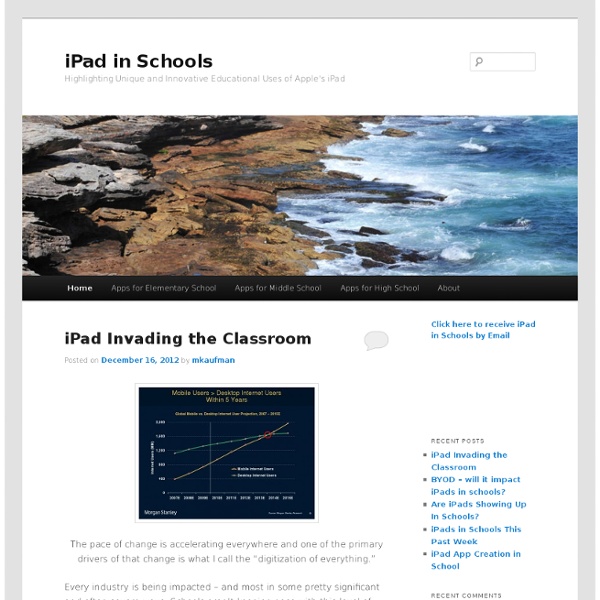 What We Learned: A 1:1 iPad Reflection This past week at Burlington High School, we started rolling out iPads for incoming freshmen. During this process, I couldn't help but reflect on what had occurred over the course of a year. Around this time last summer, BHS had roughly one thousand iPads ready to roll out to all students. The anticipation was great, the waters uncharted. During the 2011-2012 school year, we, the IT department and the teachers charted a course that led us to many exciting discoveries as well as many learning experiences. NOTE: When I say "we" from here on out, I am referring to Dennis Villano, Director of Instructional Technology for Burlington Public Schools; Patrick Larkin, Principal of Burlington High School: Bob Cunha, IT for BPS; Jose DeSousa, IT for BPS; John Allegreto, IT for BPS; and Tim Calvin and myself, Instructional Technologists at BHS. The Launch When you unfold such a large-scale initiative as giving every student an iPad, you tend to overthink everything. Learning As We Go Embrace Patience

iPad for every child at Clevedon - if the parents pay for them Clevedon Community School are hoping to get iPads for each child Comments (0) STUDENTS at Clevedon Community School could soon each have their own iPad in the classroom – as long as their parents are willing to pay for them. Leaders at the school are holding meetings next week to talk to parents about the possibility of all 1,233 students having their own iPads to help them with their studies. The school has been trying out Apple iPads since May, with 25 students and teachers being issued with the tablet computers. The trial has proved positive and now school bosses are looking at two different schemes to provide the hand held computers for students. iPads retail at between £300 and £400 – and parents will be asked to pay for the tablet computers for their children. Students who get free school meals will have an iPad purchased for them by the school. Clevedon School is the first school in North Somerset to look at such a scheme. Mr Bowkett added: "The time is right for the school.

8 Great Free Web Resources Focused on Using the iPad in Education The popularity of the iPad in our schools continues to grow, and with it, the proliferation of related web articles, tips, how-to's, and so on. This week we searched out some excellent free Internet based web sites and resources dedicated to the use of the iPad in the instructional setting. 1. Apple's Education Resources for the iPad It should come as no surprise that the iPad's maker has done a good job of putting together pages dedicated to education related applications and uses for it's popular tablet. Here Apple has put together links to apps grouped by Academic Subject. For each subject section, they provide a few specific app examples, plus one or more links to applicable subsets of apps in the iTunes store (e.g. 2. 3. iPadCurriculum.com ( This is a unique site, in that it has a great side bar for searching for content. 5. 6. 8. Bonus!

iPads in Education - Exploring the use of iPads and Tablet computers in education.