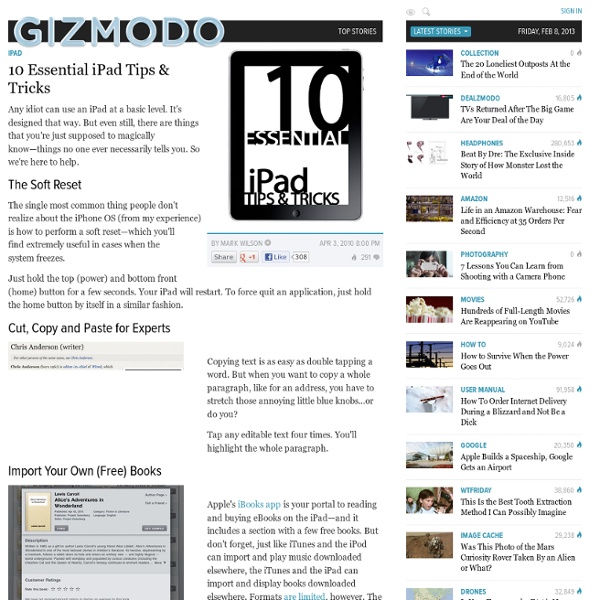 SExpand Any idiot can use an iPad at a basic level. It's designed that way. But even still, there are things that you're just supposed to magically know—things no one ever necessarily tells you. So we're here to help. The Soft Reset

Related:  ALL ABOUT IPADS

App Evaluation Program for Schools If you are an educator you can now test Happi Papi’s and other developers’ high quality learning apps for free. Apply below to receive 3-4 new apps every month. How it works: Approximately every 7-10 days participating teachers will get an email describing the new app being released. In the email there will be a link where interested teachers can order a free copy of the app in question. When you order an app, an install link will be sent to you a few days later. Apply

55 Beautiful Apple iPad Wallpapers - Noupe Design Blog May 31 2010 This is the age of iPhones, iPods and iPads, people simply love to have these amazing inventions of information technology. Apple iPhones have created a state of euphoria among its users with its amazing features and iPad is another product from Apple team that will let you browse internet, watch video, listen music, read books with just a finger touch. iPad text editing concept comes to life thanks to this jailbreak tweak When Cody posted about Daniel Hooper’s iPad keyboard demo, we had no idea that it would be as popular as it has turned out to be. Thousands of retweets later, the public has spoken out against how terrible the iPad’s editing situation is. I think John Gruber summed it up best when he noted that the iPad was a great for typing, but poor for editing. The iPad keyboard demo video was created with the hopes that Apple would respond and implement something similar in the upcoming version of iOS. There’s even instructions included on the video for submitting a bug report to Apple. Well, Apple may not listen, but someone else did.

Hands-on with the updated UI for Apple TV: get ready for more apps Apple released the expected software update for the second-generation Apple TV on Thursday. The update brings the second-gen Apple TV UI in line with the third-generation version introduced on March 7, bringing some fundamental changes to its interface and opening up Apple's options for adding more apps and content. We downloaded the update as soon as it was released to get a feel for what has changed for existing Apple TV owners—and what can be expected from the third-generation version. The most obvious change on the new main screen is the absence of a menu bar. Apple has opted to get rid of the whole pull-down menu metaphor and has shifted to more "app-like" icons for each form of content available from Apple TV.

28 iPad 2 Tips and Tricks Your new iPad 2 might not be as full-featured (or as complicated) as a laptop or desktop PC, but a few neat tricks are still hidden between the surface. Read on to learn how to secure your iPad, sync your bookmarks, and more. Download the free iPad User's Guide: You may have noticed that your iPad didn't come with a big printed manual--that's not Apple's style. 22 best iPad art apps for painting and sketching When the iPad first launched it was pegged squarely as a media consumption device. To create professional art and design, you'd still need a fully-fledged laptop or desktop system running a full-fat operating system like Mac OS or Windows, complete with top photo editing software. Making art on the iPad was a crazy idea.

50 really useful iPad tips and tricks With great new features like two video cameras, a faster processor and a Retina display, the new iPad is the world's best tablet device. It's also fully capable of running the latest version of Apple's iOS operating system and great apps like iMovie and GarageBand. Here we present 50 really useful iPad tips. We cover everything from customising your Home screen through to getting more from built-in apps like Mail and Safari. LOGiiX Styluses Review At some point, most tablet and smartphone owners think about buying a stylus. Today I have threes styluses from LOGiiX to show you that can be used for writing, drawing and even presenting at your next meeting. LOGiiX isn’t a company that I was familiar with before they contacted me to ask if I’d review some of their offerings. I’m happy to say that the quality of their products is top notch. But let’s delve in a bit deeper. Note: Click the images in this review to see a larger view.

40 Aplicaciones We all have the capacity to be creative, it’s in our very nature. The iPad is a wonderful tool for creation is almost every sphere you can imagine, from expressing poetry to capturing artistic ideas, from exploring musical invention to manipulating captured light. Whether you consider yourself a creative professional, or are simply a person who loves to dream and imagine, there are hundreds of awesome iPad apps to help you do just that. Exercise your mind, make something new today! Artistic Apps Procreate A List of Excellent iPad Apps for Educators When Apple released iPad they knew it will spark a revolution in personal computing impacting every industry even education; why not and it is one of the first mobile tablets of its kind to combine both the mobility of a cell phone and the screen of a computer. Today, as its popularity has gained floor and a wide range of students in all over the world are using it, it becomes urgently important for educators to ponder heavily on its possibilities in enhancing learing and engaging students. I will not talk about these possibilities here for i will include them in a fully detailed post later but rather provide you with excellent free iPad apps that both teachers and learners can securely use in education.

Learning Technology Plan » Supporting learning with technology in the SVVSD In May of last year, we asked parents at Coal Ridge and Westview, our middle school readiness sites, to share their insights with us. Over 230 parents across the 2 schools completed the survey. Here’s some of what we learned from their feedback. Lesson 1: Most parents feel the iPad is a benefit to their student’s learning. We asked the question “How beneficial is the iPad to your student’s learning on a scale of 1-5?”

The Best iPhone And iPad Apps For IT Professionals [Feature With the right iOS tools, IT pros can manage a datacenter from anyplace The iPhone and iPad are great mobile work solutions for many professions and IT is no exception. With the right collection of apps, virtually every IT job role can become mobile. Systems administrators, user interface designers, and even help desk agents can use their iOS devices to keep tabs on the technologies that they manage and resolve problem at any time from almost anyplace. IT tools for iOS cover a wide range of ground from basic remote access to network diagramming. Here are a set of tools that no IT department should be without. Is this the new Apple TV Set? Rumors about a TV coming from Apple have been around for a while already. Never any clear facts, yet the rumors also never entirely go away either. Now we are one big step further – what you see here above, apparently is the new Apple HDTV. According to a source of Cult of Mac, “the Apple HDTV looks like Apple’s current lineup of LED-backlit Cinema Displays but is “much bigger.” It has a built-in iSight camera for making free FaceTime video conference calls.

I was well impressed by the tips by mariebutcher Apr 6

Learned about adding the extra apps in the tray below. Did not know that. Thanks for sharing this by ms.bcotter Mar 22