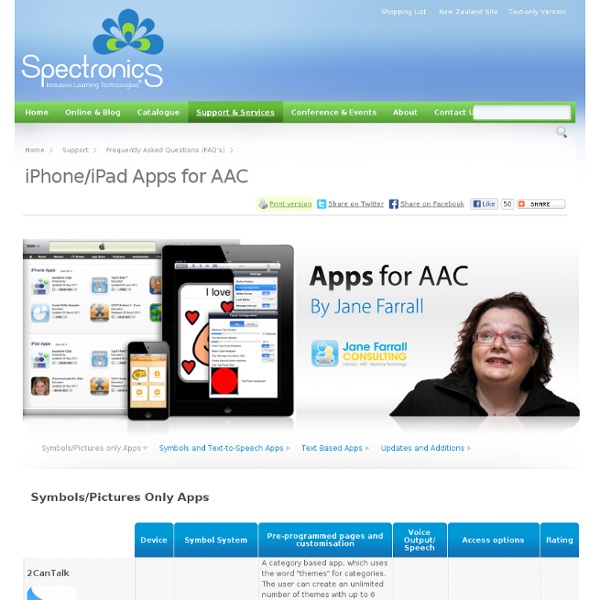 Home Support Frequently Asked Questions (FAQ's) Looking for the Apps for AAC list by Jane Farrall? It is now hosted on the Jane Farrall Consulting website What is AAC? AAC stands for Augmentative and Alternative Communication and it relates to all the tools and strategies that we use with people who have little or no speech. AAC tools can be low-tech options, such as symbol boards and communication books, as well as no-tech options such as Key Word Signing. With so many AAC apps available through the App Store, the Spectronics Consultancy Team would like to provide you with some tips and tools to help you find the right app. Top tips for successful AAC implementation: Choosing the right AAC app When considering AAC apps, you may want to consider: For more information and tools to help you match the right features for AAC apps, check out this blogpost App feature matching: an essential step. Spectronics APPraised AAC Apps Proloquo2Go Top 5 Features: Website links: Touch Chat Sonoflex TapSpeak Sequence

Best iPhone Apps: Favorite Apps 4 Children w/ Special Needs (June2011) by ThumbArcade Check out appoLearning.com, because your kids deserve the very best educational apps! ThumbArcade says: These are the Top 10 Apps as voted on by the passionate and very loyal Facebook community of Gary James from www.A4CWSN.com. ThumbArcade's picks See.Touch.Learn. #1: Awesome picture learning system from Brain Parade designed specifically for those with autism and other special needs. Grace - Picture Exchange for Non-Verbal People #10: From High Caffeine Content, this 2010 Irish Web Award winner is a non-speaking, simple picture exchange system developed for people with Autism to communicate their needs independently. Discussion

40 Aplicaciones We all have the capacity to be creative, it’s in our very nature. The iPad is a wonderful tool for creation is almost every sphere you can imagine, from expressing poetry to capturing artistic ideas, from exploring musical invention to manipulating captured light. Whether you consider yourself a creative professional, or are simply a person who loves to dream and imagine, there are hundreds of awesome iPad apps to help you do just that. Exercise your mind, make something new today! Artistic Apps Procreate Procreate touts itself as possibly the most exciting digital painting app on a mobile device, I think it lives up to that claim. It features a great deal of functionality that’s packaged in an effortlessly intuitive interface, it can’t fail to appeal to the artistic among you! Zen Brush Zen Brush is a beautiful way to get involved and make your own art! Rather than being a fully fledged painting app like Procreate or Brushes, the beauty of Zen Brush lies in the simplicity of the concept. djay

Hands-on with the updated UI for Apple TV: get ready for more apps Apple released the expected software update for the second-generation Apple TV on Thursday. The update brings the second-gen Apple TV UI in line with the third-generation version introduced on March 7, bringing some fundamental changes to its interface and opening up Apple's options for adding more apps and content. We downloaded the update as soon as it was released to get a feel for what has changed for existing Apple TV owners—and what can be expected from the third-generation version. The most obvious change on the new main screen is the absence of a menu bar. The rest of the main menu is now populated largely with what was getting crowded into the Apple TV's old "Internet" menu, as Apple continues to add streaming live and recorded content from other sources. Apple has made the interface for Movies and other content more like that of iTunes and Mac OS X's "cover flow" animated menus. For those who haven't yet checked it out, the sports content is a big boost.

Official Contest Rules: iPad Art Contest 1. NO PURCHASE OR PAYMENT OF ANY KIND IS NECESSARY TO ENTER OR WIN. Void where prohibited or restricted. By entering, each participant (“You”) agrees to be bound by these Official Rules and the decisions of Sponsor, which shall be final. Sponsor reserves the right to disqualify any person that Sponsor determines to be in violation of any term contained in these rules. 2. 3. A. Send your iPad illustration as an image to contests@macworld.com with the subject line "iPad Art Contest." By entering this contest You grant irrevocable, perpetual, non-exclusive license to the Sponsor to display and reproduce yourentryand any additional content submitted by You in connection with the Contest, including promotion of the Contest. B. 5. 6. The odds of winning are dependent on the number of eligible entries received. 7. 8. 9. 10. 11.