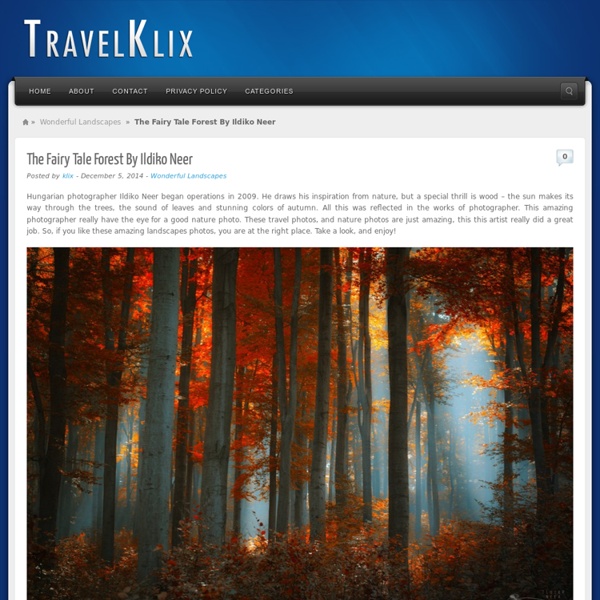 Hungarian photographer Ildiko Neer began operations in 2009. He draws his inspiration from nature, but a special thrill is wood – the sun makes its way through the trees, the sound of leaves and stunning colors of autumn. All this was reflected in the works of photographer. This amazing photographer really have the eye for a good nature photo. These travel photos, and nature photos are just amazing, this this artist really did a great job. So, if you like these amazing landscapes photos, you are at the right place. Landscapes, landscapes news, landscapes photos, nature, nature landscapes, nature news, Nature Photos, Photos, travel landscapes, travel nature, Travel News, Travel Photos, Travel Tips

3,200 Year Old Tree Never Been Captured In A Single Image... (Distractify) Cloaked in the snows of California’s Sierra Nevada, the 3,200-year-old giant sequoia called the President rises 247 feet. Two other sequoias have wider trunks, but none has a larger crown, say the scientists who climbed it. The figure at top seems taller than the other climbers because he’s standing forward on one of the great limbs. The trunk is 27 feet wide and the his mighty branches hold 2 billion needles, the most of any tree on the planet. Amazing Places Preachers Rock, Preikestolen, Norway Blue Caves - Zakynthos Island, Greece Skaftafeli - Iceland Plitvice Lakes – Croatia Crystalline Turquoise Lake, Jiuzhaigou National Park, China Four Seasons Hotel - Bora Bora

The Most Wonderful Castles From Around The World Since childhood castles are explaind as grand places, full of your favorite fairytale characters and their dreaded evil step mothers. No matter where it is or who lives there, castles contain such a majestic air about them. Castles can be romantic, spooky, historical, or downright beautiful, and usually they are all of the above. Back in the medieval period, most castles were built as a form of control, so that a ruling family could keep watch over their surrounding town. 22 Unbelievable Places that are Hard to Believe Really Exist Our world is so full of wonders that new and amazing places are discovered every day, be that by professional photographers or amateurs. Different geographical locations, climatic conditions and even seasons offer the widest variety of natural wonders: pink lakes, stunning lavender or tulip fields, breath-taking canyons and mountains, and other places you can hardly believe actually exist! [Read more...]

32 Surreal Places On Earth That Belong In A Dream. I’ve Never Wanted To Travel So Badly… During the rainy season, the world’s largest salt flat becomes the world’s largest mirror. The Salar was born when several prehistoric lakes joined into one. The salt flat is so reflective, it’s used to calibrate satellites. Tianzi Mountains, China For the avid traveler and photographer, Havana is a wonderland, a source of 24/7 inspiration that goes beyond the brightly colored, decaying facades and a seemingly inexhaustible fleet of vintage automobiles. There is a rich history and warm, inviting locales who welcome travelers with genuine interest, broad smiles and a palpable desire to connect. It rained a lot when I was in Cuba but now and then the sun would peek out and bring the buildings to life! – On the Paseo de Marti

Zythophile I dunno, you wait hundreds of years for a herb-flavoured beer, and then two come along at once. Just coincidence, I’m sure, but two new beers (ales, strictly), from the Pilot brewery in Leith, Scotland, and the Ilkley brewery in Yorkshire, have been announced this week that go back to the pre-hop tradition of flavouring your drink with whatever herbs and plants you could find in the local fields, hedgerows and woods, or up on the local moors. I’m delighted to see them, because I love herb-flavoured ales. I have just one worry, as a historian. Beer sommelier Jane Peyton supposedly gathering heather for her gruit ale for the Ilkley brewery – except that *ahem* the heather isn’t in bloom and so wouldn’t be that great for brewing with – and she’d need more than could be gathered with a pair of scissors.

Hidden Beach in Marieta Islands, Mexico Located in the Marieta Islands, about 20 nautical miles from Puerto Vallarta, lies an idyllic beach paradise hidden underneath a hole in the ground. Called the “Hidden Beach” or “Playa de Amor” (Beach of Love), this one-of-a-kind natural wonder has remained untouched by human hands for many years. Within its natural cavernous shell, crystal-clear turquoise waters peacefully lap against its powdery white shores, out of sight and out of reach from the rest of the world. Only recently when its photos spread virally across the internet did it become one of the most popular beaches in Mexico. Places to see at least once in life They say there are places in this world that anyone should see them at least once in life. Although we want each of you to go see them live, and we offer in the form of photos below. If I had to redo the path for real, the steps you would wear in Norway in Greece, Iceland, Netherlands, Croatia, China and Bora Bora.

The 16 Reasons You Need To Drop Everything And Travel Right Now There’s a characteristic of our generation that can only be described as severe restlessness. I am not specifically referring to the number of friends you have who are prescribed Adderall; although that’s definitely another cultural trend I could discuss in length. What I’m talking about is a restlessness of the soul, the wandering spirit, a culture of nomads. We’ve been bred on this notion that we are going to do it differently than our parents; we’ll be adventurous, experience life to the fullest. We’ve sat over lunch with our friends choosing our post-graduation plans, always teetering over the line of what we knew as the safe choice and what we knew as the adventurous, spirited one. We talked about living in Brazil in a house by the beach, spending days on the hammock and driving taxis at night.