16 Of The Most Magnificent Trees In The World 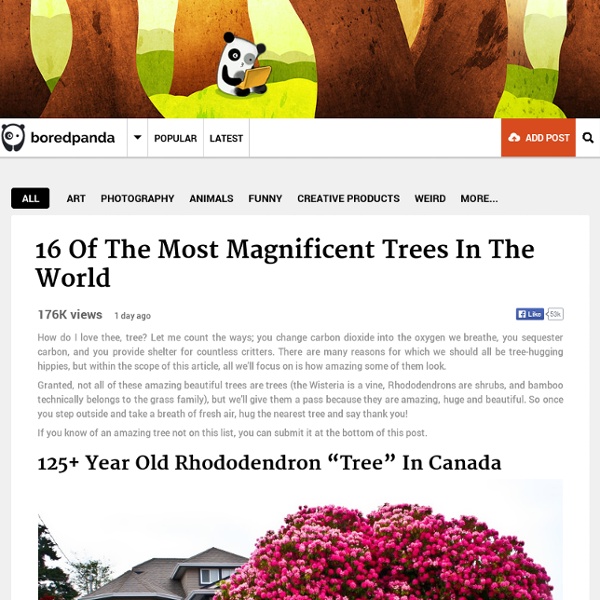 How do I love thee, tree? Let me count the ways; you change carbon dioxide into the oxygen we breathe, you sequester carbon, and you provide shelter for countless critters. There are many reasons for which we should all be tree-hugging hippies, but within the scope of this article, all we’ll focus on is how amazing some of them look. Granted, not all of these amazing beautiful trees are trees (the Wisteria is a vine, Rhododendrons are shrubs, and bamboo technically belongs to the grass family), but we’ll give them a pass because they are amazing, huge and beautiful. So once you step outside and take a breath of fresh air, hug the nearest tree and say thank you! If you know of an amazing tree not on this list, you can submit it at the bottom of this post. 125+ Year Old Rhododendron “Tree” In Canada This huge 125-year-oldold rhododendron is technically not a tree – most are considered to be shrubs. 144-Year-Old Wisteria In Japan Image credits: tungnam.com.hk Wind-Swept Trees In New Zealand

Might Alien Life Evolve Like the Incredible Octopus? by Natalie Shoemaker Consider the octopus: a creepy skeleton-less creature with limbs that have regenerative properties and a mind of their own. Its structure — inside and out — makes it like no other animal on earth. World Flora Online The New York Botanical Garden (NYBG) is one of four prominent international botanical organizations leading the effort to forge the WFO, along with the Missouri Botanical Garden, the Royal Botanic Gardens-Kew, and the Royal Botanic Gardens-Edinburgh. An additional 30 research institutions from many of the world's most biologically diverse countries, including Brazil, China, Colombia, India, Malaysia, Mexico, Russia, and Thailand, have also committed to contributing content as primary partners. Thanks to generous funding from Google and the Alfred P. Sloan Foundation, NYBG now has the resources to begin large-scale digital capture of it's plant research holdings, beginning with the extensive Flora Neotropica monographs series, published by the NYBG Press since 1967. These 110 volumes constitute the cumulative wealth of scientific knowledge for an estimated 8,500 of the world's plant species, and are now being made freely-available for the very first time!

Tree Encyclopedia 2 clicks to really open Trees have three principle features that distinguish them from all other plants. First, they have a woody stem, roots and branches which do not die back in winter, but continue to grow year after year. From the moment of its germination, a tree remains visible; from the tallest Sequoia to the smallest garden fruit tree, this principle of growth remains constant. Trees live longer than any other organism on earth.

Plants perform molecular maths Nigel Cattlin/Getty As if making food from light were not impressive enough, it may be time to add another advanced skill to the botanical repertoire: the ability to perform — at least at the molecular level — arithmetic division. Computer-generated models published in the journal eLife illustrate how plants might use molecular mathematics to regulate the rate at which they devour starch reserves to provide energy throughout the night, when energy from the Sun is off the menu1. Beautiful World of Sea Slugs-click on pic On land, slugs are far from nature's most beautiful creatures--but underwater, the family of shell-less creatures known as nudibranchs come in bright neons, glowing pastels, and vibrant primary colors. The 3,000 different kinds of nudibranchs get their color from the food they eat--and, in some cases, secrete the poisons from their prey to defend themselves against predators. The Fried Egg Nudibranch gets its name from the perfect yellow-and-white circles that line its back. These nudibranchs grow to about three inches long, and live in the waters of the Pacific and the Red Sea. Click through for more brilliant 'branches in a rainbow of colors.

Plants 'do maths' to control overnight food supplies Plants have a built-in capacity to do maths, which helps them regulate food reserves at night, research suggests. UK scientists say they were "amazed" to find an example of such a sophisticated arithmetic calculation in biology. Mathematical models show that the amount of starch consumed overnight is calculated by division in a process involving leaf chemicals, a John Innes Centre team reports in e-Life journal. Birds may use similar methods to preserve fat levels during migration. The scientists studied the plant Arabidopsis, which is regarded as a model plant for experiments.

Nudibranchs - The Flamboyant Sea Slug nicoboxethai/CC BY 2.0 Nudibranch, or what we usually call sea slugs, blow my mind. Ever since spotting one for myself during a tide pool trip about a year ago, I've been fascinated with these creatures. Ancient plants reawaken: Plants exposed by retreating glaciers regrowing after centuries entombed under ice When University of Alberta researcher Catherine La Farge threads her way through the recently exposed terrain left behind by retreating glaciers, she looks at the ancient plant remains a lot closer than most. Now, her careful scrutiny has revealed a startling reawakening of long-dormant plants known as bryophytes. La Farge, a researcher in the Faculty of Science, and director and curator of the Cryptogamic Herbarium at the University of Alberta, has overturned a long-held assumption that all of the plant remains exposed by retreating polar glaciers are dead. Previously, any new growth of plants close to the glacier margin was considered the result of rapid colonization by modern plants surrounding the glacier.

The adorable “sea bunny” - a nudibranch It’s round, and fluffy and has wiggly little ears! Sort of. These little sea creatures, affectionately dubbed “sea bunnies” have recently become social media celebrities. They’re actually sea slugs, and belong to the wild group of mollusks called nudibranchs. The bunny slug species is Jorunna parva, and was first described by the renowned Japanese marine biologist Kikutaro Baba. Remarkable Photos Capture the Light That Plants Emit The plants in Craig Burrows’ photos look like something plucked from an alien planet, sprouting wild shades of violet, pink and green. But the plants, and the colors are real. It’s the result of a cool trick of nature. All plants reflect light. these amazing tiny spiders - 2 clicks Sparklemuffin and Skeletorus sound like names my daughters would choose for a stuffed animal or an avatar, but no, these are the real names given by scientists to two newly discovered Peacock spiders. Peacock spiders are known for their flamboyant colors and dance steps, so entomologist decided to have fun with their names too. Skeletorus, which is more formally known as Maratus sceletus, was named for its unusual black and white skeleton-like pattern. Image credit: Jurgen Otto via Flickr

This was an amazing post! Nature can display some beautiful variations. by essieadelanwa Aug 26