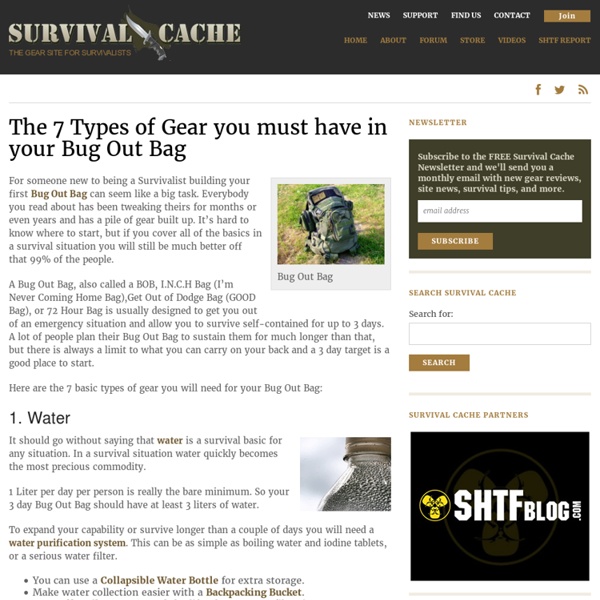 Bug Out Bag For someone new to being a Survivalist building your first Bug Out Bag can seem like a big task. Everybody you read about has been tweaking theirs for months or even years and has a pile of gear built up. It’s hard to know where to start, but if you cover all of the basics in a survival situation you will still be much better off that 99% of the people. A Bug Out Bag, also called a BOB, I.N.C.H Bag (I’m Never Coming Home Bag),Get Out of Dodge Bag (GOOD Bag), or 72 Hour Bag is usually designed to get you out of an emergency situation and allow you to survive self-contained for up to 3 days. A lot of people plan their Bug Out Bag to sustain them for much longer than that, but there is always a limit to what you can carry on your back and a 3 day target is a good place to start. Here are the 7 basic types of gear you will need for your Bug Out Bag: 1. It should go without saying that water is a survival basic for any situation. 2. Backpack Meals 3. 4. They Don’t have a ground tarp…

Survival Gear & Bug Out Bags A Bug out bag is basically a large survival kit that’s filled with everything you need to survive after a disaster. A Bug Out Bag allows you quickly grab what you need should you be forced to evacuate during a disaster. Most experts suggest that your BOB should contain enough supplies to last for at least seventy-two hours. Since most major disasters often disrupt services and normal life for longer than 72 hours, we think it is a good idea to have a Bag that will allow you survive for an indefinite period of time. Make sure your Bag is built to fit your needs; some people may need items that are not listed on this list. Remember that these are just some general guidelines meant to help you get your bag together.

100 Items to Disappear First 100 Items to Disappear First 1. Generators (Good ones cost dearly. Gas storage, risky. A Practical Guide to Antibiotics and Their Usage for Survival Preparing for Biological and Chemical Terrorism: A Practical Guide to Antibiotics and Their Usage for Survival by Leonard G. Horowitz, D.M.D., M.A., M.P.H. Tetrahedron, LLC Sandpoint, Idaho Disclaimer and Background Alternative Energy The GoalZero Adventure Kit is a small portable solar kit that can keep just about any USB powered device going indefinitely, without ever having to rely on the power grid. Read the full story » Before buying an emergency generator for your home, you need to take a couple things into consideration. Check out our Emergency Generator Worksheet to determine the right size generator for your home. Read the full story » In another attempt to outlaw the off grid lifestyle, the Environmental Protection Agency is now going after home owners who use Wood Burning Stoves to heat their homes.

Complete Guide to Emergency Airplane Landings Image by Martin Hartland We’ve all had the thought cross our mind while flying, “What if the pilot(s) somehow became incapacitated and I had to land this thing? What would I do?” Or maybe more timely for today’s world, “What if a terrorist takes over the plane and I have to save the day by knocking him out with a Chuck Norris-style thump to the head?” 14 natural items for your alternative first aid kit Cloves. Photo by Elenadan Find out which multitasking natural remedies merit a spot in your backpack. Back to Basics, DIY Soda Can Stove A small portable way to cook your meals while you are out backpacking and do not want to carry something heavy, using a soda can stove will allow you to boil water, cook your meal, or rehydrate your meal while on the go or in an emergency situation. There are many different types of can stoves out there, here is one version. For this version the directions were taken fromthesodacanstove.com.

Why The City Might Be Your Best Bet For the last 15 years or so, the common thought has been that in a disaster situation where there’s a medium to long term breakdown in infrastructure and civil order, the ONLY way to survive is to flee the city, like a dog with its tail between its legs, and hide out in the woods until things get back to normal. This is really dated thinking that ignores history. Besides the logistics of whether or not you’ve got a fully stocked rural retreat to flee to, or the fact that there’s a good chance that it will be difficult to travel with gridlock and roadblocks, there are several reasons why cities — or urban areas — make good places to stay after a disaster. We’re going to cover five of those today and another five in my next article. I need to start out by saying city people DO have additional risks that isolated rural dwellers don’t have. What do I mean by urban?

Constrictor knot History[edit] First called "constrictor knot" in Clifford Ashley's 1944 work The Ashley Book of Knots, this knot likely dates back much further.[5] Although Ashley seemed to imply that he had invented the constrictor knot over 25 years before publishing The Ashley Book of Knots,[1] research indicates that he was not its originator.[6] Ashley's publication of the knot did bring it to wider attention.[7] Although the description is not entirely without ambiguity, the constrictor knot is thought to have appeared under the name "gunner's knot" in the 1866 work The Book of Knots,[8][9] written under the pseudonym Tom Bowling.[10] in relation to the clove hitch, which he illustrated and called the "builder's knot". He wrote, "The Gunner's knot (of which we do not give a diagram) only differs from the builder's knot, by the ends of the cords being simply knotted before being brought from under the loop which crosses them.

Waterproof Fire Starter I have seen many examples of fire starters, but I wanted to try and make one that was made out of only primitive materials. I wanted to make sure that it was small and waterproof. Also, it could be used with any primitive coal producing method of fire making, like the hand drill or bow drill, as well as more modern methods, like steel and flint, Ferrocerium Rods, matches and lighters. Here is what I did . . . . Supplies: 1. Bug-out bag Off-the-shelf Red Cross preparedness kit . A bug-out bag[1][2] is a portable kit that contains the items one would require to survive for seventy-two hours[3][4] when evacuating from a disaster. The focus is on evacuation, rather than long-term survival, distinguishing the bug-out bag from a survival kit, a boating or aviation emergency kit, or a fixed-site disaster supplies kit. The kits are also popular in the survivalism subculture.[5] The term "bug-out bag" is related to, and possibly derived from, the "bail-out bag" emergency kit many military aviators carry.

Family Emergency Preparedness Kits - Living Off The Grid Every family should have an emergency preparedness kit. In fact, we should all have several kits: One for the home, one for the car trunk… You don’t have to be expecting Armageddon, zombies or a total breakdown of society to understand the value of a family emergency preparedness kit. Think about long term power outages, earthquakes, hurricanes, snowstorms… All of these situations can leave us without access to necessities if we are not prepared. 73 Best Survival Movies From surviving natural disasters, nuclear wars, and shipwrecks to sci-fi alien invasions and zombie plagues, survival movies cover a wide range of genres. Here is our list of the Best Survival Movies ever made. Wilderness Survival Movies 127 Hours – Based on the true story of Aron Ralston whose journey into Utah’s Canyonlands National Park would become one of the most horrific tales of endurance and courage ever told.Alive – Based on the real-life events of an Uruguayan rugby team that crash landed in the Andes.