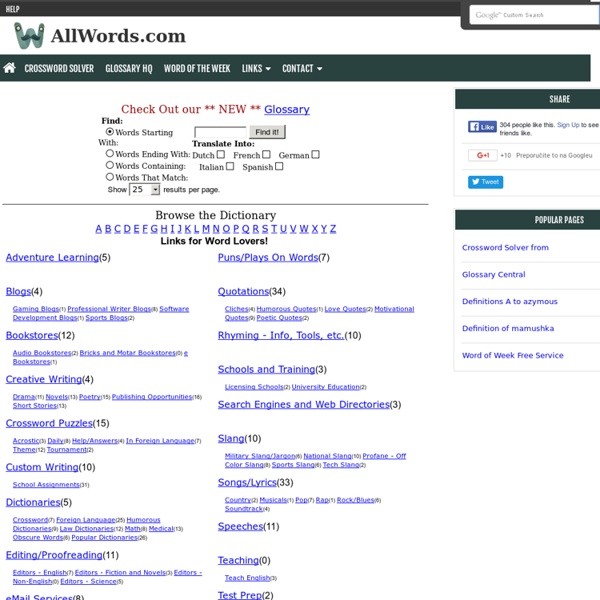 English Dictionary, Online Thesaurus, Spelling Correction, Reference LookWAYup combines a multilingual dictionary, thesaurus, translation, and other handy tools. Don't worry about spelling, this dictionary fixes it. The built-in thesaurus gives synonyms, antonyms (opposite words), and up to 25 types of related terms. Features Phonetics Crossword Puzzle Looking for Phonetics Lesson Plans? Puzzle Maker FAQ Who are these puzzles for? Careful, writers! 10 common words with opposite meanings The English language is full of words with uncommon properties. There are backronyms, metaplasms, and neologisms. My favorite words of unusual properties are contranyms, or words that are spelled the same, but have two opposite meanings. These words are also known as Janus words, named after the Roman god of gates and doorways and of beginnings and endings. Janus words teach us the importance of context and bring a whole new meaning to the phrase “use it in a sentence.”

Idioms – as clear as mud? Miranda Steel is a freelance ELT lexicographer and editor. She has worked as a Senior Editor for dictionaries for learners at OUP and has also worked for COBUILD. In this post, she looks at some of the weird and wonderful idioms in the English language. Idioms are commonly used in spoken and written English. 50 Most Challenging Words Back in 2010 The New York Times published a list of 50 fancy words that most frequently stump their readership. The New York Times 50 Fancy Words (defined and used) 1. Inchoate: just begun and so not fully formed or developed

If You've Never Used These English Idioms, You're Probably Not a Native Engli... Those of us who grew up with English as our first language have been exposed to idioms and idiomatic expressions for most of our lives. They may have confused us a little when we were children, but explanation and constant exposure not only increased our understanding of them, but likely drew them into our own vernacular. If you’re in the process of learning the English language, you may come across some of these and not be entirely sure what they mean. Exquisite Adjectives By Mark Nichol Adjectives — descriptive words that modify nouns — often come under fire for their cluttering quality, but often it’s quality, not quantity, that is the issue. Plenty of tired adjectives are available to spoil a good sentence, but when you find just the right word for the job, enrichment ensues.

The Acronym Server: find and submit acronyms and meanings The origins of acronyms are a little unclear, but their widespread use in daily life is a relatively modern phenomenon and the result of growing literacy in the 19th and 20th centuries. In more restricted circumstances, however, they have been in use for thousands of years (both the Roman and Hebrew cultures used them). There is a shortage of good articles on the web about the history and development of acronyms: the best is probably at Wikipedia. There is also an unimaginable quantity of garbage put out by the ignorant, some of which is now rightly being exposed as Urban Myth (see example).