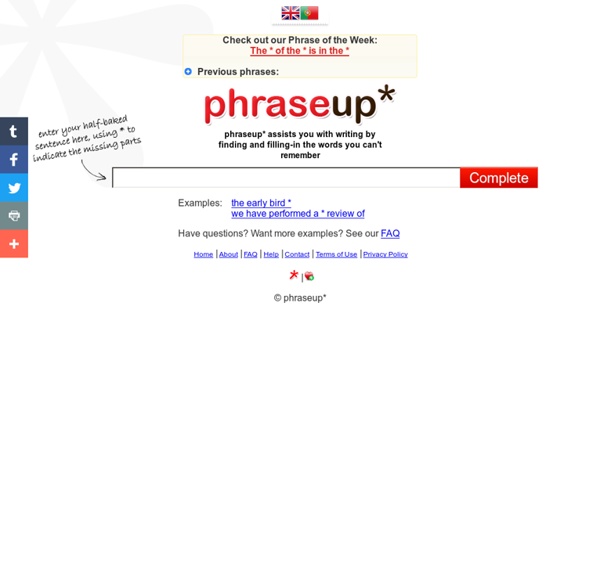 The 50 most important English proverbs The 50 most important English proverbs What are proverbs? Every culture has a collection of wise sayings that offer advice about how to live your life. These sayings are called "proverbs". How can you use proverbs to learn English? It's good to know the really common English proverbs because you hear them come up in conversation all the time. How to use Google for Hacking Google serves almost 80 percent of all the search queries on the Internet, proving itself as the most popular search engine. However, Google makes it possible to reach not only the publicly available information resources, but also gives access to some of the most confidential information that should never have been revealed. In this post, you will find the information on how to use Google for exploiting security vulnerabilities that exists within many websites. The following are some of the ways to use Google for hacking: 1. Using Google to Hack Security Cameras:

Blog Archive » Furniture vocabulary Furniture vocabulary is one of the easy areas for learners of English. However, I think that it never hurts if the students experience some success. In this post, there is a video with all the words, an infographic and three games to practise the vocabulary. Furniture vocabulary – video WORD GAMES Ammon Shea, a 37-year-old former furniture remover in New York, spent 12 months conquering what he describes as the Everest of dictionaries, the Oxford English Dictionary (OED), by ploughing through 20 volumes, 21,730 pages and 59 million words (read more here). We can only guess how much of what he read has stayed between his ears, which is, at times, quite a challenge for our students. Luckily for the latter, though, their word lists are much shorter. We can use some magic formulae for helping words stick in the head trying to come up with clever associations, getting students to use definitions, determining a rate at which words should be learnt without falling out of their heads, creating some “brain surprises” (see more here), or resort to some oldies but goldies – word games. These are some pen and paper games that require next to no time to prepare and might be used to get students to look through their word lists again and again, and help them retain new vocabulary.

Wonderful Google Tutorials and Lessons on Web Safety and Digital Citizenship ThinkB4U is an online project created out of a partnership between Google Inc. and expert safety partners Common Sense Media, ConnectSafely, and the National Consumers League. It's main objective is to educate Internet users ( kids, parents, adults, teachers ) about important topics such as the protection of one's online identity, web safety, safe use of cellphones, digital citizenship and critical thinking skills. This site, designed by Fuel Industries, includes three main components that are meant to be explored together.

onlinelanguagecenterblog While catching up on some films and shows, I noticed a few school idioms and decided to do something different this week. So here is a list of some common classroom-based idioms that you may hear, read or hopefully, even use. A for effort This comes from the A – F grading system meaning that at least you tried. Benjamin Franklin's Phonetic Alphabet Benjamin Franklin took great interest in the promotion of spelling reform. While living in London in 1768 he wrote A Scheme for a new Alphabet and a Reformed Mode of Spelling in which he proposed a fairly accurate phonetic system for spelling English. The alphabet was published in 1779 in Franklin's Political, Miscel­laneous, and Philosophical Pieces. His new phonetic alphabet consisted all the lowercase letters of the Latin alphabet, minus c, j, q, w, x, and y, which he thought redundant, plus six new letters for sounds which he thought lacked unambiguous orthographic representation. The other letters all adhered to the principle of one symbol (or unique digraph) per one sound.

US State Department Creates Illustrations Depicting Differences Between British And American English People in America and the UK both speak English, and while most words remain the same there are a few differences that could potentially create a misunderstanding. To help English speakers from all over the world better communicate, the US State Department created these useful illustrations that highlight key differences between British and American English. English originated as early as the mid-5th century, and has since been brought to a number of countries. Over the years many changes and adaptations have taken place, creating unique discrepancies in the English language all around the world. Here are some of the main differences between British and American English, we bet you find at least a few that truly surprise you! 1.

A Study of Fairy Tales: Chapter I. The Worth of Fairy Tales Sacred Texts Miscellaneous Index Previous Next In olde dayes of the kyng Arthour, Of which that Britouns speken gret honour, Al was this lond fulfilled of fayrie; The elf-queen, with hir joly compaignye, Daunced ful oft in many a grene mede. ONLY a few years ago, in the gardens of the Tuileries, in Paris, a statue was erected in memory of Charles Perrault, to be placed there among the sculptures of the never-to-be-forgotten fairy tales he had created,--Red Riding Hood, Sleeping Beauty, Puss-in-Boots, Hop-o'-my-Thumb, Bluebeard, and the rest,--so that the children who roamed the gardens, and in their play gathered about the statues of their beloved fairy friends, might have with them also a reminder of the giver of all this joy, their friend Perrault.

Prefixes, suffixes and affixes, word formation worksheets ESL Lesson Plans & Resources for Kids Kiz School provides: Video Tutorials, PPT, Interactive Games & Quizzes, Printable PDF Worksheets & Flashcards, among others. You don't need to be a professional teacher to use our materials.It is an effective, affordable private and public teaching solution for parents and schools. English For Kids How to help English learners use linking expressions Would you like to help your learners speak more coherently? Svetlana Kandybovich, the latest winner of the British Council’s Teaching English blog award for a post on speaking skills, suggests some useful classroom activities. Learning to speak a language might seem fairly straightforward in principle: first you learn the words, then you form sentences using the correct grammar, finally you string the sentences together. Voilà! – you’re fluent. However, the formula 'grammar + vocabulary' is not enough to become a competent speaker of English (or any other language).

English Open global navigation Cambridge English combines the experience and expertise of two world-leading departments of the University of Cambridge - Cambridge University Press and Cambridge English Language Assessment. Together, we deliver real-life English language learning, teaching and assessment through world-class research and a profound commitment to delivering educational value for the benefit of society as a whole.