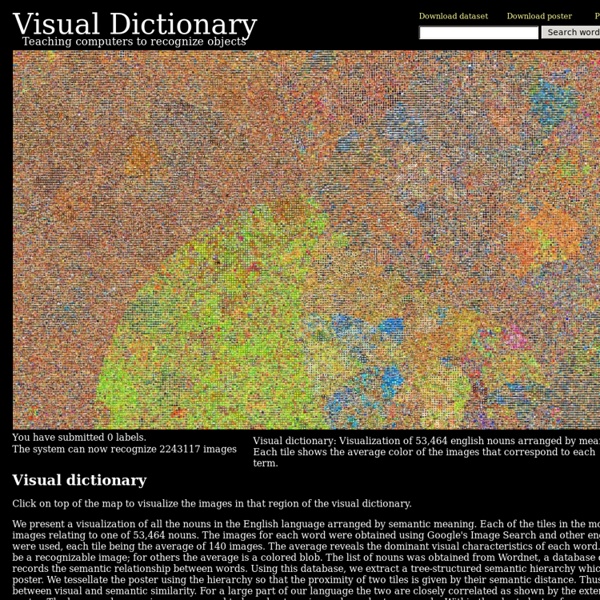 You have submitted 0 labels. Visual dictionary: Visualization of 53,464 english nouns arranged by meaning. Each tile shows the average color of the images that correspond to each term. Visual dictionary Click on top of the map to visualize the images in that region of the visual dictionary. We present a visualization of all the nouns in the English language arranged by semantic meaning. Currently computers have difficult recognizing objects in images. Teaching computers to see When you visualize the images for each word, you can click on top of each image and select if they are correct examples of the associated word (a green frame will appear around the image) or if they are incorrect (a red cross will appear). Funding support came from NSF Career award (ISI 0747120), ISF and a Microsoft Research gift. Related:  English language • computing

Pathfinders This guide is designed for anyone who is looking for the origin of words and/or phrases, also called etymology (these terms will be used interchangeably in this pathfinder). Both print-based and Web-based sources are included. Internet Sources | Searching for Etymology | Print Resources Internet Sources In general, web sites on word and phrase origins are good, but not comprehensive: most of them are question services of a sort, and the answers are posted on the site. Some of these archives can be quite large, and not necessarily organized by anything more than date of posting; if you're looking for something specific, use the find function on your browser (this will be a button in Netscape; in Internet Explorer, it's under the "edit" pull-down menu). Brewer's Dictionary of Phrase and Fable From the 1894 work of the same name; this is extensively cross-referenced, and excellent for phrases which have their roots in literature or mythology. Print Resources

Install Ubuntu Linux Alongside Windows 8 in 10 easy steps Introduction One of the most talked about topics of the last year has been the Windows 8 debacle and how it is now much more difficult to install Linux because of the UEFI secure boot system. I have just obtained my first laptop that contains Windows 8 and therefore my first laptop with UEFI and secure boot enabled. The hardware The hardware that I used to compile this guide is the Dell Inspiron 3521 laptop which you can pick up for around £400 at Argos. The Dell Inspiron 3521 has 6 gigabytes of RAM, an Intel core I3 processor, a 1 terabyte hard-drive and a 15.1 inch display. Strategy The actual strategy for installing Ubuntu alongside Windows 8 isn't much different to installing Ubuntu alongside Windows 7, Vista or even XP. 1. This is the most important step in the whole process, especially if you harbour any hopes of booting into Windows again should the worst happen. It used to be the case that when you bought a computer you received a set of disks or a CD that had a rescue image on it. 2.

DVIDS - Defense Video & Imagery Distribution System pseudodictionary: the dictionary for words that wouldn’t make it into a real dictionary :: v2.0 Outernet: Humanity's Public Library Humanity's Public Library #outernetrequest The content on Outernet is chosen democratically. We will offer numerous channels for users to request content, including SMS, Twitter, email, post, and our website. #OuternetRequest URL * URL is the address of a page or a file Request content The Outernet signal Outernet continuously broadcasts information from space. The core archive This collection of the most valuable information from the web is perpetually broadcast by Outernet. The queue Outernet’s users request content to be broadcast through The Queue. Priority content In instances where an individual or organization chooses to schedule a broadcast date for their content, Outernet offers a fee-based priority feature. Support Outernet As a thank you, we’ll broadcast your picture from space