Books are now in your hands 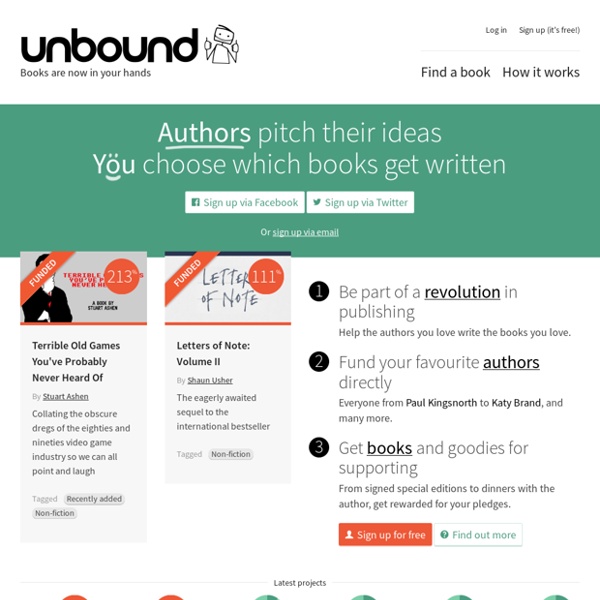 <div class="container"><div class="row"><div class="col-md-12"><span class="icon">&#x26A0;</span> This website requires JavaScript, and may not work correctly without it. <a href="https://support.google.com/adsense/answer/12654?hl=en-GB" class="link">Find out how to enable it.</a></div></div></div> At Unbound, authors pitch their ideas and you choose which books get written. Be part of a revolution in publishing

Wired 14.06: The Rise of Crowdsourcing Remember outsourcing? Sending jobs to India and China is so 2003. The new pool of cheap labor: everyday people using their spare cycles to create content, solve problems, even do corporate R & D. 100 Exquisite Adjectives By Mark Nichol Adjectives — descriptive words that modify nouns — often come under fire for their cluttering quality, but often it’s quality, not quantity, that is the issue. Plenty of tired adjectives are available to spoil a good sentence, but when you find just the right word for the job, enrichment ensues.

Hacking Kickstarter: How to Raise $100,000 in 10 Days (Includes Successful Templates, E-mails, etc.) Mike Del Ponte co-founded Soma, which raised more than $100,000 on Kickstarter using virtual assistants and free apps. I first met Mike Del Ponte two years ago when he was running marketing at BranchOut, a startup I advise. Before joining BranchOut, Mike had explored a variety of career paths, including preparing for the priesthood at Yale Divinity School and serving as a peacemaker in the West Bank. Distributed Productino (Gutenberg project) Trans-Pacific Partnership (TPP) The Trustees of Distributed Proofreaders Foundation are concerned about a new international agreement, the Trans-Pacific Partnership (TPP). The TPP will result in significant copyright term extensions in signatory countries, which will have the immediate impact of slowing or halting growth of the public domain in many parts of the world. The agreement was drafted in secret. Public scrutiny and consideration are now needed for copyright term extension, and many other aspects of the agreement.

Careful, writers! 10 common words with opposite meanings The English language is full of words with uncommon properties. There are backronyms, metaplasms, and neologisms. My favorite words of unusual properties are contranyms, or words that are spelled the same, but have two opposite meanings. These words are also known as Janus words, named after the Roman god of gates and doorways and of beginnings and endings. Janus words teach us the importance of context and bring a whole new meaning to the phrase “use it in a sentence.”

MDMA The Movie Watch our First Short Film on MDMA Therapy A Dangerous Party Drug? Despite the drug war, the recreational use of MDMA has spread around the globe, and its use is only rising. 漢字大好き - I Love Kanji Learn → Beginner Brace yourself, folks, for this lesson will introduce to you your first set of Kanji evah. The chances are that you are going to be very confused, but we'll take it slowly and things will be explained thoroughly. I want to stress this right now, do not try to memorize the on'yomi and kun'yomi. They are merely given for reference. Instead, focus on remembering the meaning of the Kanji and some vocabulary with it.

Pubslush Is Like Kickstarter for Authors Name: Pubslush Big Idea: Pubslush is injecting Kickstarter-esque crowdfunding into the publishing process. Why It's Working: Traditional publishing has a lot of overhead costs and bureaucracy that make it hard for potentially popular books to get published; with it's pledging model, Pubslush guarantees an audience before putting ink to paper. Plus, one book is donated for each one that's purchased. Too often, good manuscripts end up in the slush pile — in fact, J.K. Rowling's Harry Potter was slushed by 12 publishers when she first shopped it around. Menu Board Tutorial For Updated Info on this Post, Click HERE. I know that I normally save my tutorials for Tuesdays, but I finally got this thing hung and wanted to share it with you now:o) I just couldn't wait. This is my menu board:

Crowdfunding rare disease research – one family at a time If one of your loved ones was sick, what would you be willing to do to help? For millions of Americans in the US, even though they would give up anything and everything, there is no way for them to help. For many rare diseases, because they are so rare, there are no therapies or even diagnostics. Cake postcard tutorial Supplies Materials needed to make two cake postcards: 1 large sponge (yellow paints the best)Serrated knifeX-Acto or utility knifeSpray paint (brown, yellow, pink or white)1 tube acrylic latex caulk (brown, cream or white)Spray adhesive (3M Super 77 works great!) 3 Internet of Things Security Nuances You May Not Have Considered Over the past 18 months, I’ve been in a variety of situations where I had the opportunity to discuss the Internet of Things (IoT) with various industry professionals, developers and journalists. It intrigued me to realize that many of my viewpoints often differed from others discussing the topic in articles or event presentations. With that in mind, I wanted to share three topics that I find are discussed less frequently. Regardless, these topics should be an important aspect of the conversations we need to be having on this rapidly growing subject. 1.