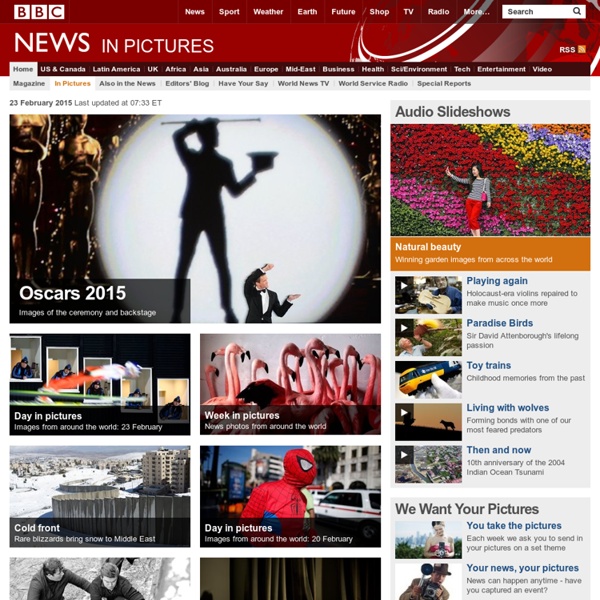 Extreme Photo of the Week Photograph by Mike Schirf “I love the skiing down the best, but I don't love the skinning up,” says 11-year-old Lilliana Libecki, seen here with her dad, Mike, on their recent sailing-skiing expedition to the Antarctic Peninsula in front of Paradise Bay and a colony of Gentoo penguins. It was Lilliana’s very first expedition with her dad, a National Geographic Adventurer of the Year, Expeditions Council grantee, and veteran of 50-some remote expeditions. “I will never ever forget the skiing and icebergs and how curious and unafraid the penguins were,” Liliana says. WHAT’S GOING ON IN THIS PICTURE - The Learning Network Blog Photo Students 1. After looking closely at the image above (or at the full-size image), think about these three questions: What is going on in this picture?

ABC3 - News - ABC3 Kids Wellbeing 5,000 kids are surveyed about their every day lives. Syria Ceasefire The US and Russia have negotiated a ceasefire. New Spaceship Virgin Galactic has unveiled it's new spaceship, the VSS Unity. Fiji Storm One of the biggest storms in the southern hemisphere. Sniffer Dogs Helping humans in the fight against animal extinction. multiple uses of newspapers & magazines for ELT Newspaper fire orange (Photo credit: NS Newsflash) I love using real things for teaching English. By “real things” I mean something from real life – and not something specially developed for learning or teaching. That’s why I prefer usual movies (and not educational ones – they are hardly very exiting, most of the times, usual radio and not “special English” stations, and usual newspapers (not the ones for ESL learners). Talking about the newspapers, their use in class (and outside too) is limitless.

40 Rare Historical Photographs You Must See #1. The Man That Refused To Give The Nazi Salute, 1936 rarehistoricalphotos.com #2. Nikola Tesla In His Laboratory, Sitting Behind His “Magnifying Transmitter” School Report - Lesson 4: Broadcasting news This lesson explains how to group stories into bulletins and the art of presentation. It also introduces the art of headline writing. Video: Broadcasting News - Huw Edwards

Student News - May 2, 2014 (CNN Student News) -- May 2, 2014 Covered this Friday: Malaysia's government releases a preliminary report on a missing plane, and Nigerians search for the kidnappers of hundreds of girls. In the U.S., a former president joins American veterans on the mountain bike trail, and a Maryland educator receives one of the highest honors in his field. We also cover an act of kindness that made prom night more special for two teenage couples. On this page you will find today's show Transcript, the Daily Curriculum, and a place for you to leave feedback.

SNN - Student News Net Thank you for visiting SNN. For 10 years, the same team of professionals has been producing SNN with a sharp focus on original, interesting content as both a mediator and motivator for learning. SNN has spent years studying the challenge of providing meaningful integration of technology in the classroom, conducting educational research, and working closely with teachers. The bottom line is that SNN today is aligned to basic principles of learning to support student achievement. Motivating students to read and explore a topic in more depth is one of SNN's greatest strengths. SNN's only source of revenue is subscriptions.

News Quiz - KET Education The 2020-2021 season of News Quiz will begin on September 10. Episodes will be posted each Thursday by 2 pm ET on PBS LearningMedia. TEACHERS: When you tell us how you and your students use News Quiz, you help ensure that KET continues to produce and improve the show. Kelly Gallagher – Resources Part of the reason my students have such a hard time reading is because they bring little prior knowledge and background to the written page. They can decode the words, but the words remain meaningless without a foundation of knowledge. To help build my students’ prior knowledge, I assign them an "Article of the Week" every Monday morning. By the end of the school year I want them to have read 35 to 40 articles about what is going on in the world.