Exercise6. English Language Listening Library Online: Learn from over 800 activities. Adrienne, The United States What are my best qualities? 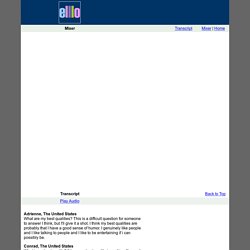 This is a difficult question for someone to answer I think, but I'll give it a shot. I think my best qualities are probably that I have a good sense of humor. I genuinely like people and I like talking to people and I like to be entertaining if i can possibly be. Conrad, The United States What is my best quality? ELLLO Views #1072 Her Best Friend. Gareth: Okay, Rebecca, you quizzed me about my best friend, now your turn. 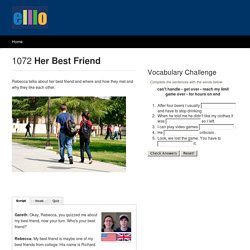 Who's your best friend? Rebecca: My best friend is maybe one of my best friends from college. His name is Richard. Gareth: Where did you meet him? Rebecca: Actually, we met in college because my roommate was out hunting for people with similar interests, and so she put on a t-shirt from Final Fantasy Seven. Gareth: So is that why you're good friends, because of this common interest? Rebecca: I think that does have a lot to do with it. Gareth: So, how often do you meet each other these days? Rebecca: Nowadays we both live really far apart. Gareth: Do you ever fight with him? Rebecca: If we stay apart from each other, we don't fight, but if we visit each other which we do on occasion, we have to keep the visit to under a week because if not, we'll start trying to kill each other.

Ingredients To Make A Good Friend. This assembly idea is to encourage children to think about what makes a good friend. 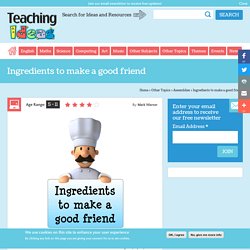 A set of resources are available for download below. These could be shown on a large display or printed. The ingredients shown in the resources are: A jar of kindness, A spoonful of listening, A can of honesty, A tube of trust, A carton of patience, 1kg of forgiveness, A box of encouragement, A pot of respect, A bag of loyalty, and a bottle of fun. These could be used as part of a presentation in the form of a TV cookery show. Can your pupils think of anything else that makes a good friend? Exercise5. Exercise5. Friendship - Definition of a Bestfriend - What is a Bestfriend? What's a Real Friend?

Friendship quiz. Important people. A (Girl) She lives next door and she’s always been really important in my life. 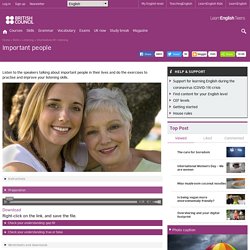 When we were little and my mum was working she used to look after us. She’d tell us stories about her childhood. It was like listening to fairy stories, life was so different when she was a child. In her kitchen she used to keep a special dish with sweets for us, and she was always baking cakes and pies. Now she doesn’t bake so much. B (Boy) He’s four years older than me and that seemed like a huge amount when we were children. C (Girl) We’ve known each other since we were five and we’ve always got on really well. D (Boy) His family moved in just a few houses down from us when I was about ten, and I still remember how excited I felt when I found out there was another boy on the street. B1 Listening: Describing people. Matching quiz. Exercise5. Personality adjectives. She's so 1.____________, she always gets people to do what she wants. 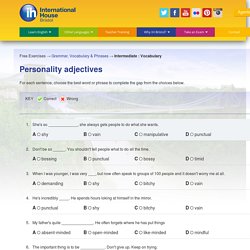 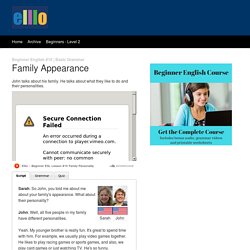 What about their personality? John: Well, all five people in my family have different personalities. Yeah. My younger brother is really fun. It's great to spend time with him. No matter what we're doing, he tells jokes and I love listening to him tell jokes about whatever we're doing at the time.