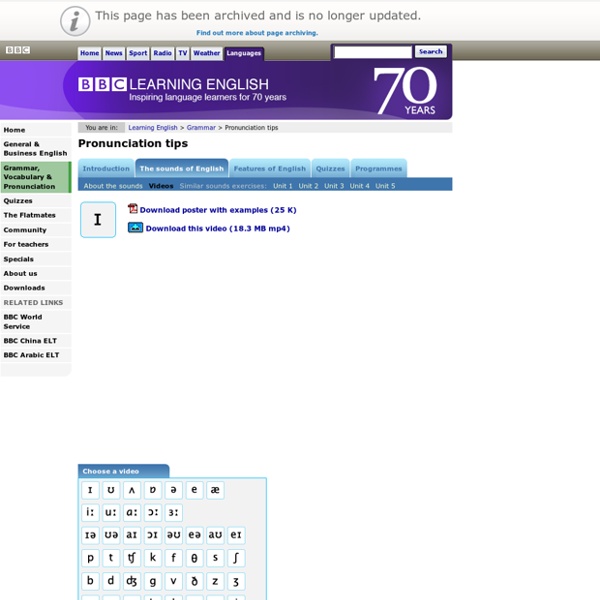 PlayPhrase.me: Endless stream of movie clips of specific phrases () Our service will teach you to understand spoken English. The purpose of PlayPhrase.me service is to learn english using TV series. We create video sequence from scenes that contain the word you search for. As soon as you submit your search query, the phrase list is returned and phrase list are played automatically. Improving your English pronunciation Here are some tips to help you improve your English pronunciation. First of all, don't worry about not having a native-English accent. It's important to be able to speak clearly, so that people can understand you. However, it's almost impossible to sound exactly like a native English speaker if you are learning English as an adult in a non-English speaking country.

The Primary Differences Among Major International English Dialects The British Empire hasn’t been in existence for almost three-quarters of a century. At the peak of its might, it covered close to a quarter of the world’s land area and ruled a fifth of its population. But the empire changed, transformed, and passed as all things pass. When the territories Britain had conquered gained freedom, there was one thing that remained as evidence of how grand the empire once was—the English language. It’s the second most common language in the world in terms of the number of native speakers; it’s the most widely spoken language of all when you include people who use it as a second language. It’s an international language, and as such, it has developed various dialects around the world.

Pronunciation: 3 Principles On How To Make Your Spoken English Sound More Natural – A Guest Post I recently had the privilege and honour of being interviewed by my fellow English Language trainer, Elena Mutonono on her recent webinar “Accent Training for Business People“. For those of you who didn’t sign up for the webinar, here’s the recording. In that webinar we discussed the benefits of accent training for non-native business people and how accent training improves communication. I asked Elena, a pronunciation expert, to write a guest post for me to share her three tips on how you can make your spoken English sound more natural. How to Improve Your English Pronunciation One of the most important aspects of learning English is pronunciation. Without clear pronunciation, it is difficult to make yourself understood. However, you might be surprised by the following statement: Pronouncing every word correctly leads to poor pronunciation! Good pronunciation comes from stressing the right words - this is because English is a time-stressed language. In other words, some words - the content words - receive more focus, whereas other words - function words - are less important.

American Accents and Dialects Public Domain / CIA NOTE: This guide uses the International Phonetic Alphabet (IPA). For information about this notation, please visit my page of International Phonetic Alphabet Resources. There are obviously many North American accents. For reference, here is a list of only the most common classifications in the United States and Canada.