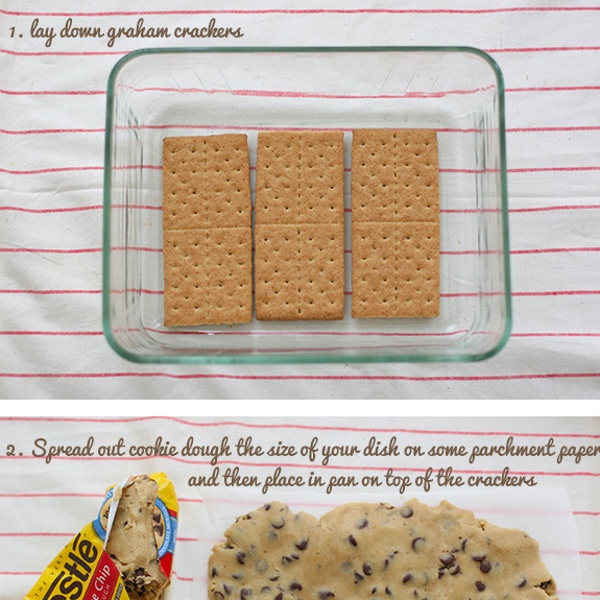 Pumpkin Chocolate Chip Cookie Pie I made you a pie. Well, okay… I made you the filling of a pie. I bought the crust. I don’t do crusts. But I made croissants so that makes up for it. Way back when I shared a chocolate chip cookie pie that I found on a yellowed scrap of newspaper in my mom’s recipe box… and it literally tasted like a giant chocolate chip cookie. I’ve only made it once since then because if it’s made, it’s eaten. By me. All of it. Just try it. So… I made the pie with pumpkin. I woke up on Sunday morning with one thought in my mind: pumpkin chocolate chip cookie pie. Alright, I sorta do. See, for the last four weeks I’ve been trying to perfect a seriously CHEWY pumpkin chocolate chip cookie. I’m probably the reason for the pumpkin shortage because, um… I think I’ve gone through at least 10 cans trying to perfect these stupid chewy cookies. I’m convinced waking up with pumpkin cookie pie on the brain was the universe’s way of telling me to lay off the cookies. Oh, except for one thing. Not all of it. Print Save

50 Things to Grill in Foil How to make a foil packet: 1. Lay a large sheet of heavy-duty foil or a double layer of regular foil on a flat surface. (Use nonstick foil where noted.) 2. Put the ingredients in the center of the foil. 1. 2. 3. 4. 5. 6. 7. 8. 9. 10. Old campfire favorite s'mores get new twists Where there is a bonfire, there will be s'mores. These roasted marshmallow and chocolate treats clearly have their place at the campground, but they've also made their way into kitchens and restaurants across the country. There is something about them that children and adults alike gravitate toward. "Adults associate s'mores with the carefree summers they had during childhood," said Julie Waterman, owner of Indulgence Chocolatiers in Waukesha. "What we do is put a more modern twist on them so you have a balance between the traditional childhood treat and something that appeals to a sophisticated adult palate." At Indulgence, customers can buy a s'mores kit ($9) to produce a s'more that tastes like the original - but better. "The sweet and salty with the marshmallow is just a knockout combination," she said. Similarly, Edward Marc Chocolatier's s'mores also feature a homemade marshmallow. "I like the consistency of homemade fluff better," she said. Heating up Don't have a campfire handy?

Four Cheese Potato Gratin Sometimes you just need potatoes. We eat a fair amount of potatoes in my house. They are versatile, easy to prepare and really the best starchy comfort food going, aside from macaroni and cheese which is the king of comfort food as far as I am concerned. All that said, I do get a little tired of the same old baked potatoes and mashed potatoes. My mom makes these scalloped potatoes that are SO good. This is a pretty basic recipe, but why get complicated with something that is so good? Four Cheese Potato Gratin Serves 4 1 pound peeled potatoes, sliced thin (about 1/4″ thick) 1 tablespoon unsalted butter 1/4 cup chopped onion 1 clove garlic, minced 3 tablespoons flour 1 1/2 cups milk 1 ounce fontina cheese 1 ounce sharp chedar cheese 1 ounce gruyere cheese 1/2 ounce cream cheese 1/4 teaspoon ground red pepper (optional) Salt and pepper 1/4 cup panko bread crumbs 1/4 cup parmesan cheese Heat your oven to 350F and spray a medium size casserole dish with non-stick spray.

Red Velvet Cheesecake Swirl Brownies Decadent red velvet brownies swirled with cheesecake. Today was the first time I’ve ever made a red velvet dessert before. Actually, my first time was on Friday. I’ve made these brownies twice in the past 3 days. Yes, they’re that good. Truth be told, the first time I’ve ever really loved a red velvet a dessert was last year at my friend’s wedding. But at my friend’s wedding last year, I was converted. Bite after bite, I fell in love. After months and months deciding what kind of homemade red velvet recipe would be my first, I finally settled on a swirly brownie recipe. For those unfamiliar with red velvet, let me take you through a quick briefing about what this gorgeous little dessert flavor is like. Today’s brownies are basically a fudgy chocolate brownie with lots of buttery vanilla flavors; I wasn’t up for making a lavish red velvet cake just yet. Chocolate, vanilla, and cream cheese swirls… no wonder I’ve made these twice in 3 days! Mix in 3/4 cup of flour into the brownie batter.

Oreo and Peanut Butter Brownie Cakes So, after being gone all last week, this has been catch up on the house week. Mostly laundry actually. Man, who knew that a weeks worth of laundry from 5 people could be so daunting. Yikes!! Oreo and Peanut Butter Brownie Cakes 1 box brownie mix, 8x8 inch size 24 Oreo Cookies 1/2 cup creamy peanut butter Preheat oven to 350 degrees and line a 12 muffin cup baker with paper liners. Prepare brownie mix according to package directions. Makes 12 servings Recipe from picky-palate.com foodsnots.com

15 DIY crafts you need to make right now It's cold, it's raining and quite frankly, it's utterly miserable outside at the moment. So stay in! But then it hits you. It's not that great inside either. You're young, so you haven't got all of that furniture and all of the little decorative trinkets that accumulate over time, and if you have, you haven't got nearly enough. Instead of spending your time sitting around moaning about the weather, why not spend your time doing something useful? Why not spend your time crafting some of these? Freshers Fields is back for 2013! 1. Source Stick your button collection around a balloon (and importantly) to each other. 2. Source Glue, buttons, cardboard and a bit of artistic ingenuity and you'll have yourself a great sign for your bedroom door (assuming you use the first letter of your first name). 3. Simply wash out a screw top spirit bottle, find a screw top soap dispenser and put it together. 4. Source Blank glass tumblers, paint, and cotton wool buds are all you need for this one. 5. 6. Source 7.

Funfetti Popcorn (or Bunny Bait for Easter) I’m going to warn you now so you can’t say I didn’t warn you later, this festive, sweet treat is HIGHLY addictive! Isn’t it fun? It’s perfect for birthdays and holidays because not only is it amazingly delicious but it makes a huge bowl full so you’ll have enough for a crowd of people. It is also easy to switch it up for different holidays, I listed a few alternate variations below. No matter what holiday it is, you are going to want this stuff around! Both kids and adults alike will absolutely love it, and you will love how easy it was to make! Funfetti Popcorn (or Bunny Bait for Easter) Ingredients 1/2 cup unpopped popcorn kernels, or 2 bags tender white popcorn 12 oz. Directions Pop popcorn in a popcorn popper into a large bowl (or alternately in the microwave if using microwave bags of popcorn) according to manufactures directions. Notes *These can be found in the cake decorating section of some supermarkets, at craft stores or at specialty kitchen kneads stores. St.

Caramel Brownie Cheesecake — Eat Laugh Surf This is a monkeyhead concoction so please don’t be disappointed with me that it’s not 100% homemade. Sometimes as a mom you have to go with your childrens ideas in order to lift their creative wings. Monkey One loves cheesecake and caramel, Monkey Two has a passion for brownies you put the two of these knuckleheads together and look at what they come up with… Caramel Brownie Cheesecake. You gotta love the way these boys think. To see their vision come to fruition we used one of our favorite brownie mixes, a no bake white chocolate cheesecake recipe from Williams-Sonoma and we tried Jamie’s homemade caramel recipe from My Baking Addiction. My girl has it going on in the kitchen y’all, get ready to drool. M2 loves his brownie mix above because while I’m at work he can whip up a batch with my surfer and feel like he has stepped out of his sous chef role into the postion of head honcho. While the boys made the brownie mix I lined a springform pan with parchment paper. Voila! Hugs & Kisses,

Death By Oreo Cupcakes They are probably the best Oreo cakes I have ever tried. A lot of cake's that I have experimented with before are like a vanilla cake with bits of Oreo in them, which didn't really give them enough Oreo flavor. But these were a lot better. I used a dark chocolate fudge cake mix instead of just a regular chocolate cake mix, which went really well with the cookies and gave the cakes just a little more flavor. So, in this recipe there is Oreo's in the cake, in the frosting, and at the bottom is a Oreo surprise. Ingredients 1 package Oreo Cookies, regular size 1 package Mini Oreo Cookies, for decoration (optional) 1 package chocolate cake mix (mix according to directions on box) 8 ounces cream cheese, room temperature 1/2 cup butter (1 stick), room temperature 3 3/4 cups powdered sugar 1 teaspoon vanilla extract cupcake liners Preheat oven to 350 degrees. Cream together butter and cream cheese. foodsnots.com

~Snickerdoodle Poppers! Oh jeez! Why oh why must I torture myself with endless irresistible delights during the Holidays? I mean, stretchy pants just don’t look nice at Christmas parties and Potlucks..lol! Eh..whatever, since the world clearly didn’t end we can celebrate with some naughty treats! Since it’s what’s on the inside that counts, these Cinnamony, puffy pillows are extra special! What you’ll need for 32 sensational Snickerdoodle Poppers: 1 can of Pillsbury Grands Flaky Layers Biscuits 1 Box of instant Vanilla JELLO 1 1/2 Cups of Cinnamon Sugar Oil for frying A flavor injector (usually found by the marinades and bbq sauces) OR a pastry frosting tip will work too! Directions: Unroll the biscuits and cut them into fourths. Prepare the instant Vanilla pudding according to the directions and set aside..or feel free to make your own Pastry Cream! In a medium pot heat up about 2″ of oil (I used Canola) Place about 4 balls at a time into the hot (350 degrees) oil and fry until both sides are evenly golden…