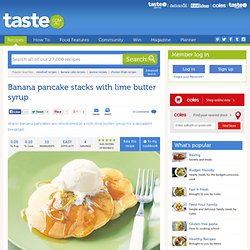 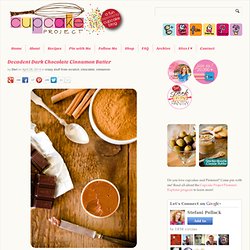 Why not make chocolate butter with decadent, creamy cow’s milk butter? Sorry nuts, we don’t need you anymore! Deep dark chocolate and spicy cinnamon mixed with salted butter yields a chocolate spread that will be your morning toast’s new best friend. The chocolate butter has no added sugar and you won’t miss it. Haniela's: ~Cupcake Apple Pockets ~ Yesterday I mentioned that I'll be making something for Cupcake Lovers..well I hope this one will not disappoint those who were awaiting a cupcake in a liner topped with a buttercream. 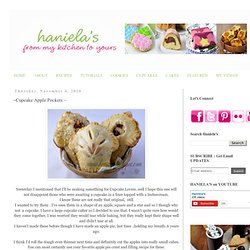 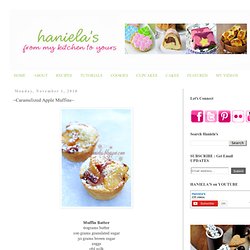 Homemade Whole-Grain Pancake Mix: King Arthur Flour. Nutella-filled Banana Muffins... I toyed with the idea of calling these QPTWB Muffins (Quite Possibly the World's Best Muffins), but it seemed a little braggy...and difficult to say. 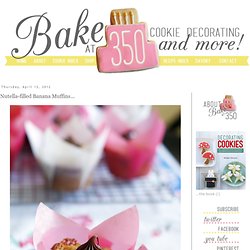 I actually take no credit for these muffins being the best.muffins.ever....it's all due to Nutella. Inspiration? ...I bought bananas. I came home from the store to see that we already HAD bananas. Lavender & Lemon Scones. No judging, ok? 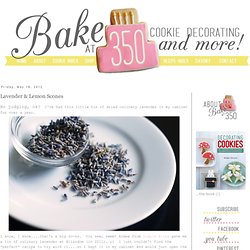 I've had this little tin of dried culinary lavender in my cabinet for over a year. I know, I know....that's a big no-no. You see, sweet Aimee from Simple Bites gave me a tin of culinary lavender at Blissdom (in 2011). ;) I just couldn't find the *perfect* recipe to try with it....so I kept it in my cabinet and would just open the tin and take a whiff occasionally. No judging, remember? Monkey Bread Muffins... quite possibly the best thing I've ever eaten! These muffins are quite possibly the best thing I’ve ever eaten! 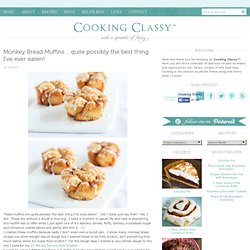 … Did I really just say that? Yes, I did! Banana Bread Pancakes with Cinnamon Cream Cheese Syrup. I admit it I’m pancake crazy =). 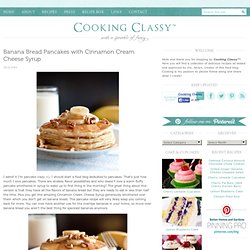 I should start a food blog dedicated to pancakes. That’s just how much I love pancakes. There are endless flavor possibilities and who doesn’t love a warm fluffy pancake smothered in syrup to wake up to first thing in the morning? Doughnut Pancakes with Doughnut Glaze Syrup. Yes. 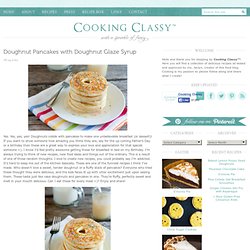 Yes, yes, yes! Doughnuts collide with pancakes to make one unbelievable breakfast (or dessert)! If you want to show someone how amazing you think they are, say for the up coming Father’s Day or a birthday then these are a great way to express your love and appreciation for that special someone =). I know I’d feel pretty awesome getting these for breakfast in bed on my Birthday. Cinnamon Bun Breakfast Smoothie. Cinnamon bun in smoothie form? 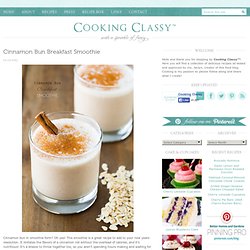 Oh yes! This smoothie is a great recipe to add to your new years resolution. It imitates the flavors of a cinnamon roll without the overload of calories, and it’s nutritious! It’s a breeze to throw together too, so you aren’t spending hours making and waiting for cinnamon rolls. Carrot Cake Pancakes. Share on Pinterest How I love a stack of hot of the griddle, drenched in syrup, fancy pancakes! Here’s a recipe you are definitely going to want to add to the weekend mornings breakfast rotation. I think I could probably eat the entire batch of pancakes by myself =). They really do taste just like fluffy, sweetly spiced carrot cake, especially when they are smothered with Vanilla Cream or Cream Cheese Syrup.

My obvious inspiration for these was the real thing, and I looked to my favorite carrot cake recipe to create this one. Blueberry Breakfast Cake. If I could eat this cake every morning for the rest of my life I most certainly would die happy. Okay, almost :). I’d highly, highly, highly (yes it deserves three of those) recommend this cake. It’s basically a moist, fruit loaded, sugar coated blueberry muffin in a simple cake form. Strawberry Coffee Cake. I tell you no lie when I say this Strawberry Coffee Cake is the best coffee cake I’ve ever eaten! I love it! It makes sense that I like it so much because I adapted the recipe slightly from my favorite ever blueberry muffins recipe. I had some fresh strawberries in the fridge I needed to use up and I’ve been wanting to make a coffee cake recipe for some time so I decided why not strawberry?

The combination of flavors in this cake is irresistible! Apple Cinnamon Roll Muffins. Share on Pinterest Apple pie meets cinnamon rolls in this Fall treat that you won’t want to miss out on. I mean really, is there anything quite like a fresh out of the oven cinnamon roll drenched with glaze or a slice of perfectly sweetened and spiced homemade apple pie? With that said, they were made to go together. These are what Fall baking is all about. With these I decided to shred the apples in them for a few reasons.

Small Batch Whole Wheat Double Chocolate Banana Muffins. Double Cream Cheese Cinnamon Rolls. Yay, fall is almost here! Cherry Vanilla Smoothie. I’m having a hard time letting go of summer. Specifically, summer berries. Blueberry Muffins. Beer Batter Waffles. How to Make Focaccia Bread, Rosemary Focaccia Bread. 1 Stir the yeast into the 1/3 cup of slightly warm-to-the-touch water and let it rest for 10 minutes. 2 In a large bowl, pour in 2 1/4 cups of tepid water and 2 tablespoons olive oil. After the yeast has rested for 10 minutes and has begun to froth, pour it into the water-oil mixture. 3 Whisk in 2 cups of flour (either the bread flour or the all purpose, at this stage it doesn't matter which) and the tablespoon of salt.

Add the rosemary. Then, cup by cup, whisk in the rest of the flour (both the bread flour and all purpose). Once the bowl is pretty clean, turn the dough out onto a board and knead it well for 8 minutes. Note that a KitchenAid mixer (or some other brand of upright electric mixer) works well for the mixing and kneading of the bread dough. 4 In a large clean bowl, pour in about a tablespoon of oil and put the dough on top of it. Easy Brazilian Cheese Bread (Pão de Queijo) Print Our tour of Brazil continues. After posting the moqueca recipe, several of you asked if I had a recipe for Pão de Queijo, or Brazilian cheese bread, sort of like a chewy cheese puff made with tapioca flour. As a matter of fact, I do. My friend Bill gave me this recipe years ago, a favorite from his Brazilian wife Silvia. New Orleans at Home with Bourbon Street Beignets. I’ve never been to New Orleans, in fact, I’ve never had much of a desire to go there.

Well, until I found out about beignets. These sweet, little, doughy balls of goodness have me ready to hop a flight straight to Louisiana just so I can get a taste of them right from the source. Flavorful Blueberry Orange Bread. Growing up my mom always made a lot of breakfast breads. From banana to pumpkin to lemon poppyseed, they were some of my very favorite baked goods.

They are a great way to prepare in advance so I decided to make some breads to serve with scrambled eggs for our out of state guests. With 10 people in our house it worked great to make a loaf of banana bread and four mini loaves of this flavorful Blueberry Orange Bread. Japanese Curry Puffs - Curry Bread Recipe. Ginger Scones Recipe. As with any baking recipe that relies to some degree on the leavening power of baking powder, make sure you are using relatively fresh baking powder. Baking powder that is older than six months tends to be flat. So, mark your can with the date you bought it, and then replenish when it is over 6 months old. Ingredients 3 cups all purpose flour (400 g)3/4 cup sugar (160 g)1 teaspoon baking soda1/2 teaspoon baking powder1/4 teaspoon salt3/4 cup candied ginger (chopped into 1/4-inch pieces or smaller) (3 1/2 ounces or 110 g)1 Tbsp lemon zest1 Tbsp grated fresh ginger3/4 cup buttermilk* (200 ml)10 Tbsp (5 ounces, 140 g) unsalted butter, melted1 Tbsp coarse sugar for sprinkling on top (optional) * If you don't have buttermilk you can substitute with a Tbsp of lemon juice and 3/4 cup minus one tablespoon of regular milk.

Method 1 Preheat oven to 400°F (or 200°C). 2 In a large bowl vigorously whisk together the flour, sugar, baking soda, baking powder, and salt. Coffeehouse Scones Recipe. I have called these scones, Coffeehouse Scones, because they are similar to what coffee shops and bakeries sell. But a better name may be Buttermilk Scones as buttermilk is used to bind all the ingredients together. This is a really nice tasting scone with a crisp outer crust and a soft, almost bread-like texture. They are delicious plain, or you can serve them with butter and jam, clotted cream and jam, or even lemon curd and clotted cream or whipped cream. In the summer I also like to use them to make Strawberry Shortcake. When you make scones do not over mix the dough, as this will result in a tough scone.