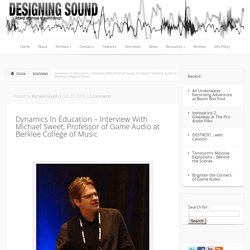 Michael is an accomplished video game composer and has been the audio director of more than 100 award winning video games. His work can be heard on the X-Box 360 logo and on award winning games from Cartoon Network, Sesame Workshop, PlayFirst, iWin, Gamelab, Shockwave, RealArcade, Pogo, Microsoft, Lego, AOL, and MTV, among others.

He has won the Best Audio Award at the Independent Games Festival, the BDA Promax Gold Award for Best Sound Design, and has been nominated for four Game Audio Network Guild (GANG) awards. In 2014, Michael authored the book “Writing Interactive Music for Video Games” which is now available from Pearson Publishing. Michael was a professor of mine during my studies at Berklee College of Music. DS: How long has formal game audio education been around? Michael was a co-founder of Audiobrain. How Hard Is It To Create Music For Addictive Video Games? We Asked The Guy Who Makes It. You might not always pay attention to the music backing your video games while you’re actively slashing away at gladiators or trying to make colored orbs disappear, but those infectious melodies will strike you at some point, perhaps while you’re standing in line at the supermarket, when you suddenly find yourself humming the Zelda theme. 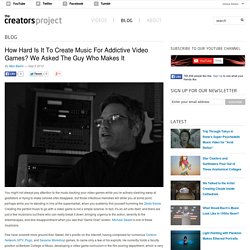 Creating the perfect music to go with a video game is not a simple science. In fact, it’s an art unto itself, and there are just a few musicians out there who can really break it down, bringing urgency to the action, serenity to the dreamscapes, and dire disappointment when you see that “Game Over” screen. Michael Sweet is one of these musicians. Few have covered more ground than Sweet. Shoot 'em Up, Cue the Strings. Salary Secrets. A Sweet take on video game scores. Kai Ryssdal: Video gamers the world over are going to recognize this... 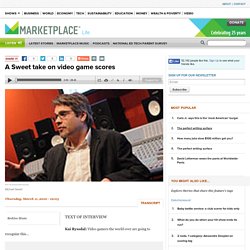 XBox Music That's an Xbox 360 console waking up. A sound, or a tune, I suppose that was composed specifically for the Xbox by a professional musician. The music gets even more complicated once you load up a disc. Composers spend days -- or even weeks, sometimes -- scoring the more complicated games. Michael Sweet writes some of that music. Michael Sweet: The field of video games has been around for quite a number of years, but the sort of exploration into sort of modern genres of music and the ability for us to use orchestral music and things like that inside of video games is relatively new, I think.

Ryssdal: When you sit down to write for a video game, is it pretty much the same process as writing for a television show or a movie or something? Ryssdal: By rule you mean, if he shoots this guy then the music sounds like this, and if the car crashes this way, it sounds like this? SWEET: Absolutely. The Callie Crossley Show. Membership Other Ways to Support Major Giving Schedules Programs. 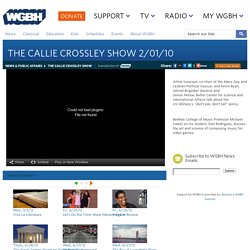 Berklee College of Music. "Video game audio is a multidisciplinary field; it's so varied and massive in scope, with about six disciplines combined into one. 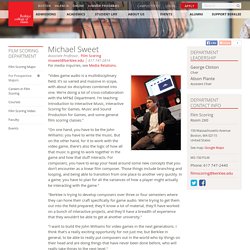 We're doing a lot of cross-collaboration with the MP&E Department. I'm teaching Introduction to Interactive Music, Interactive Scoring for Games, Music and Sound Production for Games, and some general film scoring classes. " "On one hand, you have to be the John Williams: you have to write the music. But on the other hand, for it to work with the video game, there's also the logic of how all that music is going to work together in the game and how that stuff interacts. For composers, you have to wrap your head around some new concepts that you don't encounter as a linear film composer. Berklee Prepares Students for Video Game Music Careers. PODCAST: Inside Berkee—Michael Sweet. Michael Sweet, an associate professor who teaches video game scoring, has seen gaming grow from a niche market into a $60-billion-a-year industry. 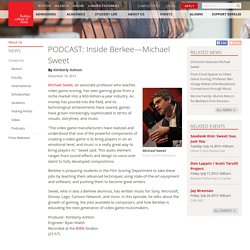 As money has poured into the field, and its technological achievements have soared, games have grown increasingly sophisicated in terms of visuals, storylines, and music. "The video game manufacturers have realized and understood that one of the powerful components of creating a video game is to bring players in on an emotional level, and music is a really great way to bring players in," Sweet said. This audio element ranges from sound effects and design to voice-over talent to fully developed compositions. Berklee is preparing students in the Film Scoring Department to take these jobs by teaching them advanced techniques using state-of-the-art equipment and software, and pushing them to become great writers.