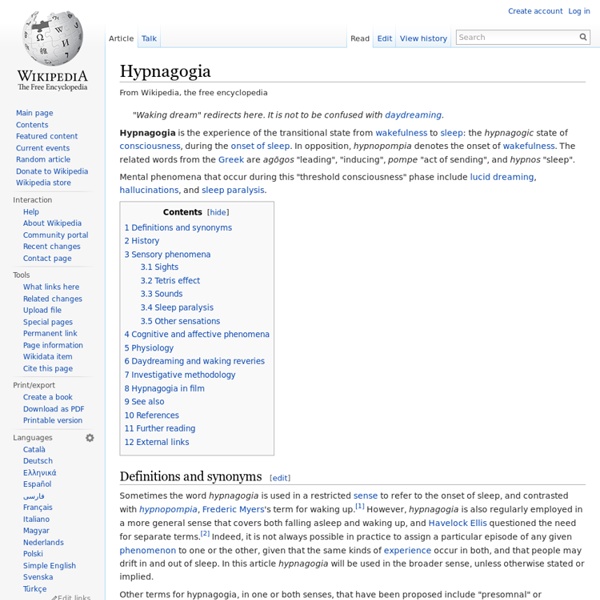 "Waking dream" redirects here. It is not to be confused with daydreaming. Hypnagogia is the experience of the transitional state from wakefulness to sleep: the hypnagogic state of consciousness, during the onset of sleep. In opposition, hypnopompia denotes the onset of wakefulness. The related words from the Greek are agōgos "leading", "inducing", pompe "act of sending", and hypnos "sleep". Mental phenomena that occur during this "threshold consciousness" phase include lucid dreaming, hallucinations, and sleep paralysis. Definitions and synonyms[edit] Other terms for hypnagogia, in one or both senses, that have been proposed include "presomnal" or "anthypnic sensations", "visions of half-sleep", "oneirogogic images" and "phantasmata",[2] "the borderland of sleep", "praedormitium",[3] "borderland state", "half-dream state", "pre-dream condition",[4] "sleep onset dreams",[5] "dreamlets",[6] and "wakefulness-sleep transition" (WST).[7] History[edit] Sensory phenomena[edit] Sights[edit]

Ego death Ego death is a "complete loss of subjective self-identity." The term is being used in various intertwined contexts, with related meanings. In Jungian psychology the synonymous term psychic death is used, which refers to a fundamental transformation of the psyche. In the death and rebirth mythology ego death is a phase of self-surrender and transition, as described by Joseph Campbell in his research on the mythology of the Hero's Journey. It is a recurrent theme in world mythology and is also used as a metaphor in some strands of contemporary western thinking. In (descriptions of) psychedelic experiences, the term is used synonymously with ego-loss, to refer to (temporary) loss of one's sense of self due to the use of psychedelics. The concept is also used in contemporary spirituality and in the modern understanding of eastern religions to describe a permanent loss of "attachment to a separate sense of self"[web 1] and self-centeredness. Definitions[edit] Mysticism[edit] Daniel Merkur: ...

Allopathic medicine Allopathic medicine is an expression commonly used by homeopaths and proponents of other forms of alternative medicine to refer to mainstream medical use of pharmacologically active agents or physical interventions to treat or suppress symptoms or pathophysiologic processes of diseases or conditions.[1] The expression was coined in 1810 by the creator of homeopathy, Samuel Hahnemann (1755–1843).[2] In such circles, the expression "allopathic medicine" is still used to refer to "the broad category of medical practice that is sometimes called Western medicine, biomedicine, evidence-based medicine, or modern medicine" (see the article on scientific medicine).[3] Etymology[edit] Allopathic medicine and allopathy (from the Greek prefix ἄλλος, állos, "other", "different" + the suffix πάϑος, páthos, "suffering") are terms coined in the early 19th century[4] by Samuel Hahnemann,[2][5] the founder of homeopathy, as a synonym for mainstream medicine. History[edit] Current[edit] References[edit]

Medicine Medicine (also called conventional, orthodox, scientific, or mainstream medicine, especially in connection with alternative medicine, UK English i/ˈmɛdsɨn/, US English The word medicine is derived from the Latin ars medicina, meaning the art of healing.[3][4] Clinical practice[edit] The components of the medical interview[5] and encounter are: The clinical examination involves the study of: It is to likely focus on areas of interest highlighted in the medical history and may not include everything listed above. Medical laboratory and imaging studies results may be obtained, if necessary. The medical decision-making (MDM) process involves analysis and synthesis of all the above data to come up with a list of possible diagnoses (the differential diagnoses), along with an idea of what needs to be done to obtain a definitive diagnosis that would explain the patient's problem. This process is used by primary care providers as well as specialists. Institutions[edit] Delivery[edit] Branches[edit]

en.m.wikipedia We ask you, humbly: don't scroll away. Hi, reader in Canada, it seems you use Wikipedia a lot; that's great! It's a little awkward to ask, but this Saturday we need your help. Time is running out in 2019 to help us. Thank you! Sleepwalking, also known as somnambulism or noctambulism, is a phenomenon of combined sleep and wakefulness.[1] It is classified as a sleep disorder belonging to the parasomnia family.[2] It occurs during slow wave sleep stage, in a state of low consciousness, with performance of activities that are usually performed during a state of full consciousness. Although sleepwalking cases generally consist of simple, repeated behaviors, there are occasionally reports of people performing complex behaviors while asleep, although their legitimacy is often disputed.[7] Sleepwalkers often have little or no memory of the incident, as their consciousness has altered into a state in which memories are difficult to recall. Signs and symptoms[edit] Associated disorders[edit] "Mr.

en.m.wikipedia 18th/19th-century German writer, artist, and politician A literary celebrity by the age of 25, Goethe was ennobled by the Duke of Saxe-Weimar, Karl August, in 1782 after taking up residence in Weimar in November 1775 following the success of his first novel, The Sorrows of Young Werther (1774). He was an early participant in the Sturm und Drang literary movement. During his first ten years in Weimar, Goethe became a member of the Duke's privy council, sat on the war and highway commissions, oversaw the reopening of silver mines in nearby Ilmenau, and implemented a series of administrative reforms at the University of Jena. Goethe's first major scientific work, the Metamorphosis of Plants, was published after he returned from a 1788 tour of Italy. Life[edit] Early life[edit] Goethe's father, Johann Caspar Goethe, lived with his family in a large house (today the Goethe House) in Frankfurt, then an Imperial Free City of the Holy Roman Empire. Legal career[edit] In Alsace, Goethe blossomed.

Yoga for Health Not every yoga class is appropriate for students with injuries. Those students with special needs should instead try yoga therapy. By Timothy McCall, M.D. In 1998, the Journal of the American Medical Association (JAMA) reported that an eight-week yoga program had positive results for people with carpal tunnel syndrome. In the JAMA< study, one of the key components that led to the positive results is that senior Iyengar teacher Marian Garfinkel carefully designed a therapeutic yoga program tailored to the specific needs of carpal tunnel patients and, when necessary, adapted it to the individuals in the group. Yoga therapy is typically conducted one-on-one or in small groups. If you're looking for a yoga therapist, it's important to be aware that there are many different kinds from a wide variety of yoga traditions and, as of yet, there is no universally accepted certification system. AN ACTIVE YOGA PRACITCE An effective yoga therapist must have this.

en.m.wikipedia German poet, philosopher, historian, and playwright Johann Christoph Friedrich (von) Schiller (German: [ˈjoːhan ˈkʁɪstɔf ˈfʁiːdʁɪç fɔn ˈʃɪlɐ], short: pronounced [ˈfʁiː.dʁɪç ˈʃɪ.lɐ] ( listen); 10 November 1759 – 9 May 1805) was a German poet, philosopher, physician, historian, and playwright. During the last seventeen years of his life (1788–1805), Schiller developed a productive, if complicated, friendship with the already famous and influential Johann Wolfgang von Goethe. Early life and career[edit] Although the family was happy in Lorch, Schiller's father found his work unsatisfying. In 1766, the family left Lorch for the Duke of Württemberg's principal residence, Ludwigsburg. There the boy Schiller came to the attention of Karl Eugen, Duke of Württemberg. While at the Karlsschule, Schiller read Rousseau and Goethe and discussed Classical ideals with his classmates. In 1780, he obtained a post as regimental doctor in Stuttgart, a job he disliked. Marriage and family[edit] Writing[edit]

Recapitulation theory The theory of recapitulation, also called the biogenetic law or embryological parallelism— often expressed in Ernst Haeckel's phrase as "ontogeny recapitulates phylogeny"—is a largely discredited biological hypothesis that in developing from embryo to adult, animals go through stages resembling or representing successive stages in the evolution of their remote ancestors. With different formulations, such ideas have been applied and extended to several fields and areas, including the origin of language, religion, biology, cognition and mental activities,[1] anthropology,[2] education theory[3] and developmental psychology.[4] While examples of embryonic stages show that molecular features of ancestral organisms exist, the theory of recapitulation itself has been viewed within the field of developmental biology as a historical side-note rather than as dogma.[5][6][7] In contrast, there is no consensus against the validity of the theory outside biology. Origins[edit] Haeckel[edit]

en.m.wikipedia Life[edit] Details of Ulrich's life are difficult to ascertain, for much of what scholars know relies heavily upon information gleaned from his often-fictional, self-styled autobiographical work the Frauendienst (trans. Service of Ladies). Separating fact from stylized hyperbole has proven difficult for historians.[1] When Philip of Sponheim, the Archbishop-Elect of Salzburg, was deposed by Pope Alexander IV for refusing to take holy orders, Philip raised an army to defend his title. Many aspects of his life are unrecorded, but some genealogy survives. Ulrich died on 26 January 1275.[11] He was buried in Seckau in modern-day Austria. Works[edit] Ulrich wrote his stories at a time when knightly ideals were just being promulgated from Western Europe. Frauendienst[edit] Frauenbuch[edit] Frauenbuch was a dialogue set in 1240, published in 1257, lamenting the decay of chivalric courtship. Popular culture[edit] Notes[edit] Bibliography[edit] Arnold, Benjamin.