The Ultimate Guide To Using iPads In The Classroom 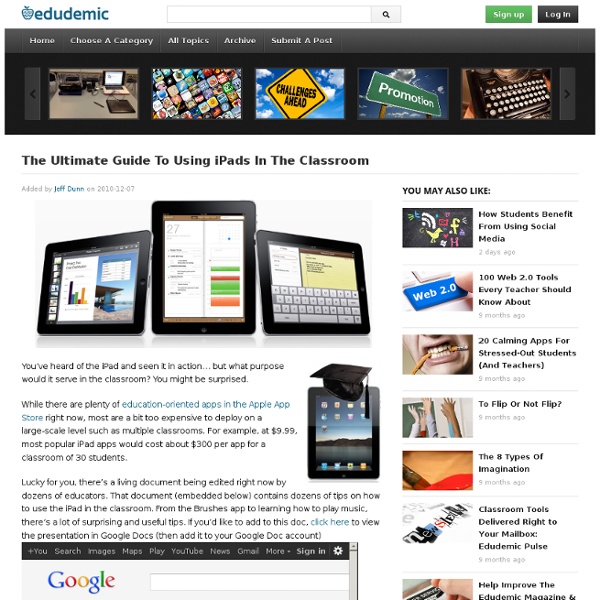 How Students Benefit From Using Social Media 14.60K Views 0 Likes A lot of criticism has been leveled at social media and the effect it has on the way students process and retain information, as well as how distracting it can be. However, social media offers plenty of opportunities for learning and interactivity, and if you take a moment to think about it, it's not too hard to see how students benefit from using social media. 100 Web 2.0 Tools Every Teacher Should Know About 44.24K Views 0 Likes We're always trying to figure out the best tools for teachers, trends in the education technology industry, and generally doing our darnedest to bring you new and exciting ways to enhance the classroom. To Flip Or Not Flip?

The Votes Are In: Edutopia’s Tech Integration Lesson Contest WHAT WORKS IN EDUCATION The George Lucas Educational Foundation Facebook Edutopia on Facebook Twitter Edutopia on Twitter 39 Sites For Using iPads in the Classroom Pages - Menu This Blog Linked From Here Sites to Follow Friday, October 7, 2011 39 Sites For Using iPads in the Classroom The Must-Have App Review Rubric Added by Jeff Dunn on 2011-11-22 So you just downloaded a few educational apps that you think might be useful in your classroom. How do you accurately compare and contrast them? Thanks to a new app review rubric from by eMobilize , it’s easier than ever to understand just how useful an app may be in the classroom.

40 Most Awesome iPad Apps for Science Students Posted on Wednesday June 15, 2011 by Staff Writers The iPad has found its way into hospitals, retail stores and homes across the nation, but it’s also making a big splash in the classroom, even with some of the best online colleges. With a great selection of apps focused on everything from word processing to keeping in touch with classmates, the tablet computer can be an invaluable tool for learning — no matter your age. Online science students haven’t been left out, of course, and there are a wide range of applications offering help with chemistry, biology, astronomy and even the math that comes along with certain fields. If you’re a college student looking to supplement your science studies, these apps are some of the best for learning, sharing, researching and just plain having fun. Chemistry

Teacher’s Trial by Tech – Staff Engagement Success? There’s no doubt about it, the iPad is a desirable product. Now the new staff have one it is clear excitement and enthusiasm abound. Despite initial resistance and concern, staff have already asked for increased support and content. This is a short post to highlight anything we have learned over the past three months relating to staff engagement. Recommended approach

CITE Journal Article Volume 1, Issue 1 ISSN 1528-5804 Print Version Commentaries Submit A Commentary Carroll, T. G. (2000). If we didn't have the schools we have today, would we create the schools we have today? Contemporary Issues in Technology and Teacher Education [Online serial], 1 (1). Want to Build a New App? There's an App for That, Too Competition in Apple’s App Store is so tough that even strong concepts must be planned to perfection before any development should start. So enter App Cooker: A hot new iPad app that makes sure other apps have the right ingredients in place before any development begins. App Cooker ($19.99) from Sophia-Antipolis, France-based Hot Apps Factory helps aspiring designers organize, plan and get app projects ready for production. 30-year-old Xavier Veyrat — the designer of App Cooker — spoke to Mashable about the development of the platform and the steps that go into creating a masterpiece app recipe. Have you always been into design? Always.

111 EdTech Resources You May Have Missed–Treasure Chest July 3, 2011 It has been a HUGE week in EdTech this week with ISTE 2011, Google+, Microsoft 365 and the rumor of Facebook’s big announcement next week (can someone say videochat). I’m writing this introduction before I start wading through everything I’ve collected this past week. Not everything I think is important when I collect it makes it into the final list. However, even before I start the list, something tells me that this may be my biggest Treasure Chest ever. So, welcome to this week’s edition of Treasure Chest—111 (Yes-111!!!) EdTech Resources You May Have Missed.

Big History Project The Big History Project is not a for-profit program. Your engagement will exclusively benefit teachers and students around the world. Teaching the course It's easy to teach Big History — all you have to do is register, set up a class, and go! Start a pilot Teaching Large Classes with an iPad » To this day I remain a big fan of the overhead projector. I truly believe it was more effective a tool for teaching than the projected Powerpoint slides will ever be. I stood facing the students, watching their expressions, which I could see since the lights were sufficiently bright. I could draw on the screen and change directions as questions arose. In fact I will argue that the ‘golden age of college teaching’ if there was one was stimulated by the addition of the roller to the overhead projector. It allowed the combining of student response, just-in-time teaching, constructivist development and several other educational buzz terms in one simple device.

Best iPad Apps for Kids So you’ve got a brand new iPad and kids who are clamoring to play on it. What you need now are a handful of high quality apps with good replay value. You don’t have time to slog through the entire iTunes App Store looking for them though.