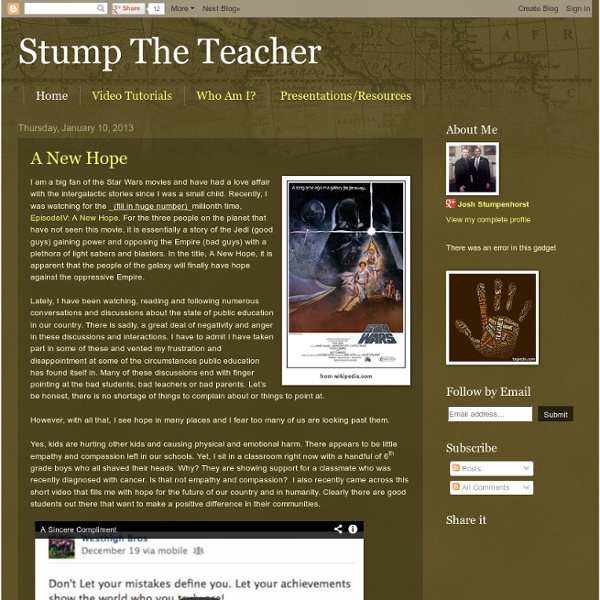 There have been numerous people doing the More Homework Meme and a few folks have tagged me. However, I am complying with the homework that my Twitter Best Friend For Life, Lyn Hilt, assigned me, as she was the first to tag me. I think it is a great way to get to know our fellow bloggers/tweeters, so here it goes. For starters, here are 11 random facts about me many people may not know. 1. I was a collegiate triple jumper at North Central College and won 3 indoor and 2 outdoor conference titles in that event as well as finished 9th in the country as a junior.

The Ultimate Guide To Using iPads In The Classroom How Students Benefit From Using Social Media 14.60K Views 0 Likes A lot of criticism has been leveled at social media and the effect it has on the way students process and retain information, as well as how distracting it can be. However, social media offers plenty of opportunities for learning and interactivity, and if you take a moment to think about it, it's not too hard to see how students benefit from using social media. Scott's eLearning Library It’s that time of year again when thoughts turn to planning the annual learning resources conference in order to offer some blue-sky thinking and fresh ideas on how to reinvigorate the library service, so I thought I’d take the opportunity to share a quick blog post about some of the developments I’ve been working on with fellow librarians and RSC colleagues lately. Continue reading I can’t claim the credit for this one, the idea’s adapted from a post in Doug’s blog (via my eagle-eyed friend Merv Stapleton ), but makes for such a neat little activity to do with learners to check their digital footprints I had to share. Continue reading If you’ve been on Twitter for a while, then you’ve probably come across the game where people quote film or song titles in their tweets, but substitute one of the words for a specific keyword for comic effect.

AirPano - Gorgeous 360 Degree Virtual Tours of the World AirPano is a fantastic site for viewing gorgeous 360 degree imagery of dozens of famous landmarks and cities all over the world. I initially reviewed the site a couple of years ago. Recently, I noticed that AirPano has added some new features to go along with an expansion of their galleries. Much of the AirPano imagery now includes interactive pinmarks that you can click to learn more about the places you're seeing in the AirPano imagery. For example, if you visit the AirPano imagery of Petra you can click the pinmarks to learn about the construction of Petra and the significance of various carvings seen throughout the virtual tour.

Alan November Alan thrives on confirming and challenging educators’ thoughts about what’s possible in the world of teaching and learning. More than anything, he is a teacher at heart, with a wealth of experience teaching learners of all ages. Alan November is an international leader in education technology. He began his career as an oceanography teacher and dorm counselor at an island reform school for boys in Boston Harbor. CITE Journal Article Volume 1, Issue 1 ISSN 1528-5804 Print Version Commentaries Submit A Commentary Carroll, T. G. (2000). If we didn't have the schools we have today, would we create the schools we have today?

Blog Request advice via helpdesk → Blog New Colour Management Infokit Released Posted by Matt Faber on Monday 07 April 2014 Tags: Diary of a Public School Teacher! 2 Apr Childhood, Where Art Thou? Why Can’t Kids Be Kids? My girls are coming in with highlights in their hair. Highlights!