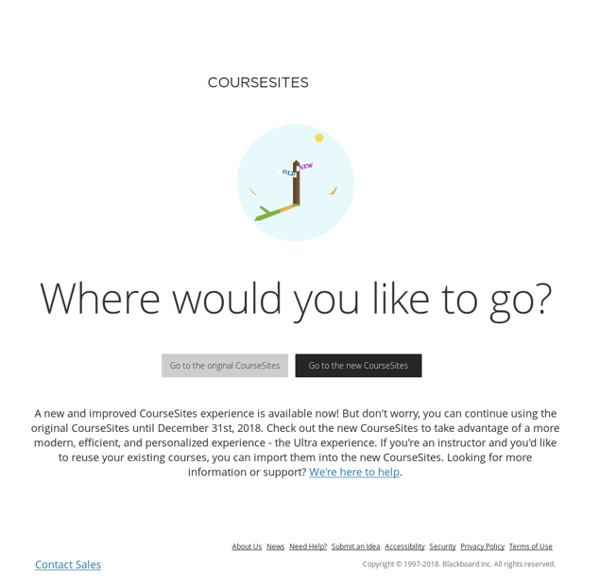 China has started a grand experiment in AI education. It could reshape how the world learns. Zhou Yi was terrible at math. He risked never getting into college. Then a company called Squirrel AI came to his middle school in Hangzhou, China, promising personalized tutoring. He had tried tutoring services before, but this one was different: instead of a human teacher, an AI algorithm would curate his lessons. Robotutor No human teacher can keep up with thousands of students in massive open online courses. Smart software can now stand in, offering personalised guidance TENS of thousands of students across the world will log in to online classrooms this week. A large portion of them will be learning to write code in computer science courses. The scale and reach of massive open online courses (MOOCs) is growing year on year, and many argue they have the potential to vastly improve access to education.

COFA Online Gateway Contact Us Home LTTO Episodes Learning To Teach Online Episodes context, planning and teaching case studies technical glossary The Ultimate Beginners Guide to Design Thinking You’ve probably heard of design thinking – the go-to term for ‘forward-thinking’ businesses since the ’80s. Maybe your colleagues have taken an online course on it, or maybe you’ve just heard the term thrown around so ubiquitously that it feels like a phenomenon you’ll never really understand in a tangible sense. Design thinking, put very simply, is a human-centered approach to creative problem-solving, and has made a looot of noise all over the internet and beyond in the latest years.

Anytime online video-based learning for Office 2010 users — IIWE-yes dot Com Article by Bob Little IT training specialist Quasar has launched a series of video-based online learning materials. Covering Microsoft Office 2010, Upgrade to Microsoft Office 2010 and Microsoft Office 2007, the series of e-videos – known as Anytime – is intended for organisations which want to gain the maximum benefit in terms of worker efficiency and effectiveness following an upgrade of the Microsoft Office suite of programs. They are also available to individuals who want to improve their Microsoft Office skills. Learn Videos for Instructors These videos and playlists are available in English only. Need help with Blackboard Learn? Want to learn something new? 5 Quick Tips for Improving Your Instructional Design Online Learning Page 3 of 3 5 Quick Tips for Improving Your Instructional Design

Guiding Faculty into Immersive Environments Learning Spaces Guiding Faculty into Immersive Environments What's the best way to get faculty to engage with emerging technologies and incorporate new learning spaces into their teaching? Five institutions share their experiences. In 2015, Virginia Polytechnic Institute and State University's Institute for Creativity, Arts and Technology (ICAT) launched the Cube, an adaptable space for research and experimentation housed in the campus's Moss Arts Center.

News Corp. Education Tablet: For The Love Of Learning? hide captionJoel Klein, former New York City schools chief, left to run News Corp.'s education division. On Thursday, Amplify announced a specially designed education tablet. Richard Drew/AP Founder of Lynda.com Talks About Future of Learning Online (Video) - Kara Swisher - Media To Lynda Weinman, it’s funny that the online learning site she and her husband founded in 1995 suddenly seems like an overnight success. “Yes, only two decades in the making,” she joked at a lunch I had with her last week. But there certainly has been a big buzz around Lynda.com — named after Weinman — after the Carpinteria, Calif., company raised $103 million a month ago in its first major funding.

Should 'real' students do an online course on the side? Universities have started giving away their content free as "massive open online courses", with the satisfyingly ridiculous acronym mooc (I challenge you to say it three times with a straight face). Eleven top UK universities recently announced they were joining the Open University to launch FutureLearn, in a bid to catch up with the elite US institutions that have led the way in teaching huge numbers online. It all sounds great for people who, for one reason or another, can't go to a traditional university. Moodle This autoattend block is a modification of the Attendance block by Mr. Dmitry Pupinin et. al (v1.0.8, 2007). In addition to the original manual mode, automatic mode (from the access log of Moodle) and semi-automatic mode (user clicks a link) are also possible.

Massive open online course Poster, entitled "MOOC, every letter is negotiable", exploring the meaning of the words "Massive Open Online Course" A massive open online course (MOOC /muːk/) is an online course aimed at unlimited participation and open access via the web.[1] In addition to traditional course materials such as filmed lectures, readings, and problem sets, many MOOCs provide interactive user forums to support community interactions among students, professors, and teaching assistants (TAs). MOOCs are a recent and widely researched development in distance education which were first introduced in 2006 and emerged as a popular mode of learning in 2012.[2][3]