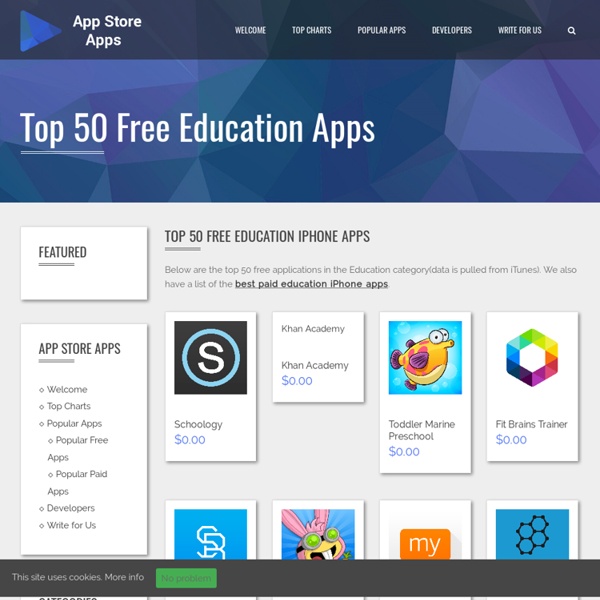 50 really useful iPad 2 tips and tricks An absolute gem of an article by John Brandon and Graham Barlow from MacLife on 30th March over at TechRadar. This is going to become my iPad manual from here on in. Customised iPads for all iPad 2 tips and original iPad tips - get 'em here! With great new features like two video cameras, a faster processor and a thinner design, the iPad 2 is the world's best tablet device. iPad 2 review iPads and iPods in Education This work is licensed under a Creative Commons Attribution-NonCommercial-ShareAlike 3.0 Unported License. @Ideas_Factory The blog of Julian S. Wood.

Top 200 best iPad apps 2011 If you've got yourself an iPad Air or new iPad mini, you'll want to start downloading the best iPad apps straight away. And if you already have an iPad 4 or older iPad, you might want to update it with some new apps. It's the apps that really set iOS apart from other platforms - there are far more apps available on the App Store for the iPad than any other tablet.

Study: iPad Apps Improve Learning First of its kind evidence shows that an iPad learning app can measurably deliver educational value. I’ve tested, rated, tried out, and put tons of educational iPad apps through their paces. Some are worthwhile, some are not worth your time. That’s why I was excited to read about a new study that attempted to figure out the actual effectiveness of iPad apps in learning. In a landmark study, a USC professor studied 122 fifth-graders from two schools and four math classes to assess the effectiveness of an iPad app for improving students’ fractions knowledge and attitudes. The study is the first to document learning and motivation gains achieved through iPad game play. Ten great free education apps for the iPad - Technology & Gaming - Student Life Most of them cost money, however, and if you laid all that end-to-end, you’d have several million pounds in a long line. Not everyone wants to pay for their apps, so we’re having a look at our favourite free ones currently available. We can’t pretend in any objective way that these apps are the ‘best’ free apps, but they’re all interesting and fun in their own ways.

The Complete List of iPad Tips, Tricks, and Tutorials The Apple iPad is an amazing tablet, and to help you get the most out of it, we’ve put together a comprehensive list of every tip, trick, and tutorial for you. Read on for more. Note: This article was originally published earlier this year, but we’ve updated it with a real lot more content since then, so we’re republishing it for you. We’ll be keeping this page updated as we find more great articles, so you should bookmark this page for future reference. How to Maximize Your iPad’s Battery Life So you got yourself a shiny new Apple device, but you’re so addicted that the battery is running out way too soon—what you need is a couple of tips to keep your battery running for as long as possible, and we’ve got them here.

iPad EdResources As 2011 winds down, I have spent a good deal of time thinking about all of the online resources and tools that have helped make this past year a successful ‘Year of the iPad’ in my school district. And with an upcoming winter vacation ahead for many educators next week, I thought it might be nice to share out some of my favorite resources for using iPads, iPods, and iPhones in the classroom. Although there are many, many fantastic resources available online, the list below are the ones I have come to rely on… I hope you find them as useful as I have! IEAR: The IEAR community is a solid resource for locating and discovering appropriate educational apps for the classroom. I really appreciate that the IEAR community is made up of educators who are using these apps in the classroom already, and are sharing reviews and information about specific apps.

iPod It’s hard to describe to people all of the magic that happens at Anastasis on a daily basis. It really does feel like something special, a magical quality of falling down the rabbit hole into another world where school is fun and challenging and wonderful. The learning that happens here is very organic, it lacks a formulaic approach. Maths Apps for Primary School I got a great phone call the other day from a teacher who had been given the opportunity to develop a intervention program. The school had identified a group of students who had been struggling with their Maths. We talked about what outcomes were important and came up with a cross section of apps that might cater for Counting, Operations and Place Values. Obviously some of these are more appropriate for the younger students but we have looked for ones that will make maths a fun thing to learn about. Math Magic is an application for kids to have fun with math and at the same time learn addition, subtraction and multiplication. Kids need to just touch the answer.

Top 20 Must-Have Educational iPhone & iPad Apps Used By Real Teachers in the Classroom - iPhone app article - Shara Karasic With the advent of the 2011/2012 school year, teachers who have access to mobile technology are scrambling to find the best education apps for the iPod Touch, iPad and iPhone. Educators use apps for everything from communicating with students to inspiring creativity to dissecting virtual frogs. Luckily, we have lots of educators (including Apple Distinguished Educators) on Appolicious who share their lists of the best education apps for elementary, middle school, junior high, and high school. These are the education apps most listed by educators on Appolicious.