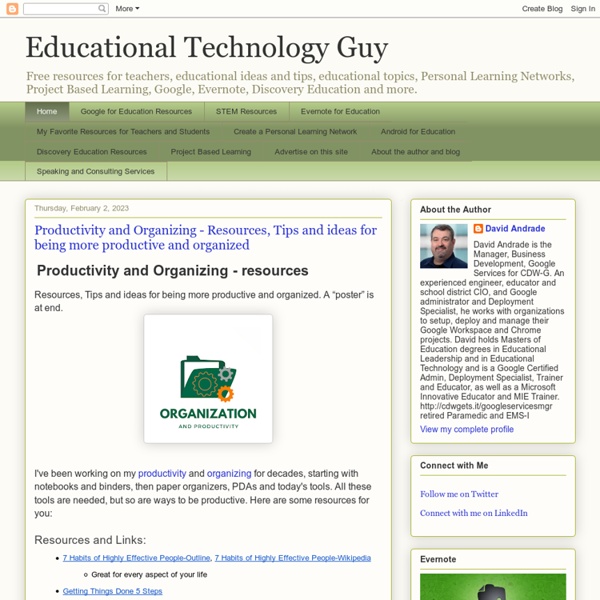 I'm a huge Android user. I have my HTC One Smartphone and my own Nexus 7 tablet. In addition, my department uses Nexus 7 tablets for mobile access and some of our schools have Nexus 7 and Nexus 10 tablets. I have a bunch of apps that I use on a regular basis, both when I was a teachers, as well as now as a CIO. This is my list of top apps for educators: Gmail - email is the main way I communicate with my staff, vendors, and school admin and teachers.

Differentiation using Google Classroom – GoogleAppsAction.com When I first heard about Google Classroom last year I was excited. Was this going to be a free LMS that integrated with the already excellent Google Apps for Education (GAfE) suite? Would it be bigger and better that Moodle or Edmodo? How would it integrate with Google Drive and Google Sites? When Google Classroom finally hit the cloud, I admit that I felt it was a bit of an anti-climax. It was so simple with limited functionality.

existing or continuing for a long time - synonyms and related words Synonyms long adjective lasting for a large amount of time long-term Scott's eLearning Library It’s that time of year again when thoughts turn to planning the annual learning resources conference in order to offer some blue-sky thinking and fresh ideas on how to reinvigorate the library service, so I thought I’d take the opportunity to share a quick blog post about some of the developments I’ve been working on with fellow librarians and RSC colleagues lately. Continue reading I can’t claim the credit for this one, the idea’s adapted from a post in Doug’s blog (via my eagle-eyed friend Merv Stapleton ), but makes for such a neat little activity to do with learners to check their digital footprints I had to share.

Bud the Teacher – Inquiry & Reflection for Better Learning Yesterday, I had the opportunity to sit in on a conversation with some smart folks in the maker education community1. We were continuing a conversation we started on Twitter a month or so back. You can watch a recording of yesterday’s piece of the conversation here. You should listen/watch the conversation. I learned a lot […] Making Low Prep Teacher's Edition Digital Interactive Notebook Why would you want to create your own teacher's edition digital interactive notebook? Let's find out! As an Educator, we do not have the luxury of teaching only one class period a day. Some of us teach 5-6 classes, and they sometimes are all completely different. If you are a teacher who has implemented the concept of the ‘paperless classroom’, you may feel a little stressed out by the additional, technological prep work involved in the 4-5 minute break you get in between class periods. Maybe you thought going paperless would eliminate a lot of the work and would be a breeze teaching the same lesson from class to class, only to find out it’s actually a lot more hassle than expected.

Google Earth comes to the classroom with new educational tours and lesson plans In April, Google introduced a revamped, reimagined version of Google Earth, which included a number of new features that go beyond visualizing the planet through the use of maps and satellite imagery, to also allow users to explore the world through tours, and learn about its many wonders. Today, Google announced it’s bringing Google Earth to the classroom. The new version of Google Earth introduced a feature called Voyager, offering a showcase of guided tours from scientists, nonprofits, and other storytellers and organizations. The tours let you explore a region or multiple locales, through the use of photos, 360-degree videos, and Google Maps Street View, along with text. At launch, there were tours from groups like BBC Earth, Jane Goodall, Sesame Street, and NASA available. At the ISTE (International Society for Technology in Education) conference, Google today announced it’s expanding its lineup of tours to include 10 new stories, specifically designed for educational use.

Blog Request advice via helpdesk → Blog New Colour Management Infokit Released Posted by Matt Faber on Monday 07 April 2014 Tags: Colour management for digitisation projects Jisc Digital Media have published a new infokit on colour management for digitisation projects. Digital Breakouts in the New Google Sites The new Google Sites is live. This is a template website to give you ideas for making digital breakouts in the new Sites. Currently, there is no way to copy sites or publish them as templates. The good news is that the new Sites is so intuitive that making digital breakouts is easier than ever! Here are the digital breakouts I have created on my own or in conjunction with colleagues.

edutopia Often when I look at how to help students, I think back on my own journey as a student. When challenged to teach students to trust that the effort of persistence is worth it, I think back on when I myself figured it out. And do you know what I came up with? The only times I showed grit as a student were when I was interested in the topic and wanted to get through a challenge. Even now, I only score a 3.5 out of 5 on Angela Duckworth’s Grit Scale quiz. So the reality is this: Sometimes I have grit and sometimes I don’t. e-learning isn't working... but it could be so good! This is a guest post written by Sarah Horrigan-Fullard and was originally posted here. Sarah works for the University of Sheffield leading the e-learning and digital media team and part time for the Open University as an associate lecturer. e-learning isn’t working…. Okay. That’s a bit controversial… right? And, to be honest, if I didn’t believe in the power and potential of learning in new and non-traditional ways (see how I skirt around calling it ‘e-learning’?)

20+ Hyperdocs tips, ideas and templates to use right away HyperDocs have taken the education world by storm. But what are they? And how do we start using them in our classrooms? Here are tons of ideas for getting started with HyperDocs! Technology blog Protesters in favour of Proposition 8 outside the US supreme court, which threw it out. Photograph: Jonathan Ernst/Reuters Charles Arthur: Plus Symantec talking to bankers?, Apple's App Store analysed, the Prop 8 naysayers, coathangers v music, and more Continue reading... Articles for complete beginners in French (Fle A1) "You have been a fantastic teacher and a friend. My move to France would have been positively awful had I not had such a wonderful tuition by you. You are truly an energetic, interesting person who makes people at ease and comfortable in your company.

Top 8 Chromebook Simple Switch Activity Sites – Bridges News [Over the summer an assistive technology specialist at a school-board that’s gone Chromebooks wrote to us, “What do I do with these things?” This is part 2 of our series on the options for the Chromebook in a special needs setting. ] Now that you’ve got your switch talking to your computer (see the previous article Chromebooks and Switch Access), what can you do with it? A recent search of the Chrome Web store found only one developer actually creating single switch apps for the Chromebook, sensoryapphouse.com (but of course new ones can appear at any time. If you find some let us know.) At the time of writing this piece the apps that sensoryapphouse.com had posted included speech analysis, symmetry painting and various visual stimulation apps.

This blog explains way to use technologies such as My Study Life, Google Drive, and Evernote to enhance educational experiences. by katherineking2 Mar 19