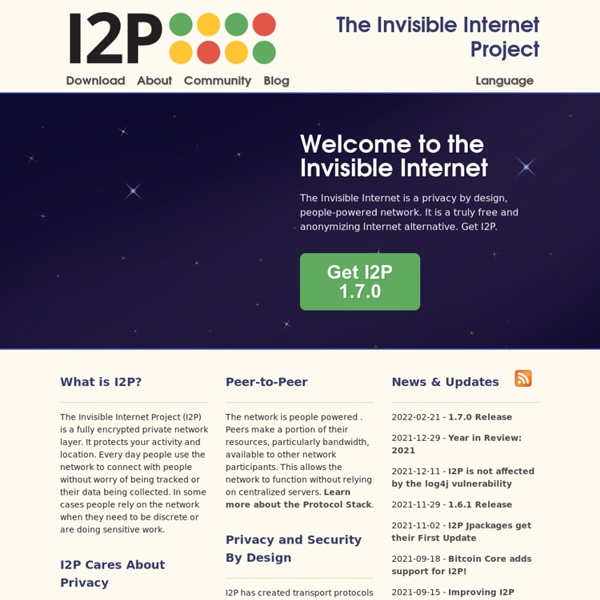 The I2P network provides strong privacy protections for communication over the Internet. Many activities that would risk your privacy on the public Internet can be conducted anonymously inside I2P. Get I2P 0.9.12 {*style:<ul>*} {*style:<li>*}I2P is an anonymous overlay network - a network within a network. It is intended to protect communication from dragnet surveillance and monitoring by third parties such as ISPs. {*style:</li>*} {*style:<li>*}I2P is used by many people who care about their privacy: activists, oppressed people, journalists and whistleblowers, as well as the average person.

Suspicious Domains Background A suggested use of these lists is as input file for Guy's domain sinkhole project. Thank you to handler Jason Lam for developing this project! This page is still experimental and evolving. We will be adding more data sources over time. Urge Congress To Reject The PROTECT IP Act Urge Congress To Reject The PROTECT IP Act UPDATE: The Hill is reporting that the Tea Party Patriots -- an 850,000-member Tea Party group -- slammed the Blacklist Bill, while referencing our op-ed in the Oregonian. This is HUGE news, since Republicans in the House of Reps are about to introduce a version of the Blacklist Bill and they're sure to be jittery about going up against a wing of the Tea Party. ORIGINAL: We've got his back: Senator Ron Wyden of Oregon has been our most consistent champion as he's stood up for Internet freedom and ferociously opposed the Internet Blacklist Bill.

I2P The software is free and open source and is published under multiple licenses. The name I2P is derived from Invisible Internet Project, which, in pseudo-mathematical notation, is represented as I²P. Technical design[edit] I2P is beta software since 2003.[3] Developers emphasize that there are likely to be bugs in the software and that there has been insufficient peer review to date.[4] However, they believe the code is now reasonably stable and well-developed, and more exposure can help development of I2P.

The Cisco Umbrella 1 Million top domains - Cisco Umbrella Here at Cisco Umbrella, we have a culture and passion for giving back to the technical community. This has included projects such as: our free consumer OpenDNS service, Phishtank, DNSStream, BGPStream, DNSCrypt, and several other data sources. With that, we are very excited to announce the Cisco Umbrella 1 Million — a free list of the top 1 million most popular domains. This project came from our most recent hack-a-thon where we had more than 300 participants across 3 different countries hack for 24 hours. Hack-a-thons are an important piece of our engineering team’s culture and showcases their passion to build.

PR – Who & What is Anonymous! Dear Citizens of the World. There has been some confusion among the media about who/what anonymous is/represents. There have also been questions asked about the input from Anonymous during the current global revolution. Is Usenet Safer than BitTorrent? Shhh... Stick to bittorrent kid. Usenets the devil and I highly recommend against it. Geez.

Sacred:Sacred Public Servers - SacredWiki Introduction Early 2010 Ascaron discontinued closed server support for Sacred Underworld in favor of consolidating its efforts in maintaining Sacred 2. In essense the Sacred Community were left with a game that was really good to play online, however no central way of match-making and entering other peoples games. As of September 2011 - Wippien.com is no longer managing the connections for Wippien VPN, however, the same application will work, with Jabber.org accounts.

OSINT Feeds from Bambenek Consulting Master FeedsUse of these feeds governed by this license.NOTE: The license for this data has changed. The data is now under copyright and requires a commercial license for any commercial use (including companies protecting themselves). Contact sales@bambenekconsulting.com to inquire on commercial license options. Peter King Laments ‘First Amendment,’ Wants ‘Better Controls’ On Facebook, Twitter, And The Internet Today, despite his prior advocacy for terrorism and his smears of Muslims, Rep. Peter King (R-NY) testified before a British parliamentary inquiry into the root causes of domestic Muslim radicalization. At one point, MP Keith Vaz asked King if he supports “better controls on the internet,” on sites such as Facebook and Twitter, in the context of extremist elements using the internet to get their message out. King replied that he did, but he also lamented the “ First Amendment issue ” with doing so and said that he’s trying to find a way to do it without violating freedom of speech:

Usenet A diagram of Usenet servers and clients. The blue, green, and red dots on the servers represent the groups they carry. Arrows between servers indicate newsgroup group exchanges (feeds). Arrows between clients and servers indicate that a user is subscribed to a certain group and reads or submits articles. One notable difference between a BBS or web forum and Usenet is the absence of a central server and dedicated administrator. HoMedics True HEPA Air Cleaner Reviews - ProductReview.com.au We have not had much luck with air purifiers. The first one we bought was perfect but when it came to buying a new filter, we discovered the company had gone out of business. The second one we bought was a salt therapy one which while it is good for my husbands sinuses and he doesn't get so many infections, it does not do much for me and house dust is still affecting my asthma - no matter how much we vacuum the bedroom carpet, I am still sensitive to it. So we purchased the Homedics Professional HEPA Air cleaner, we bought the larger m...Read more odel and tried it for the first time on Saturday. After just a few hours of it being plugged in, we could already smell the difference.