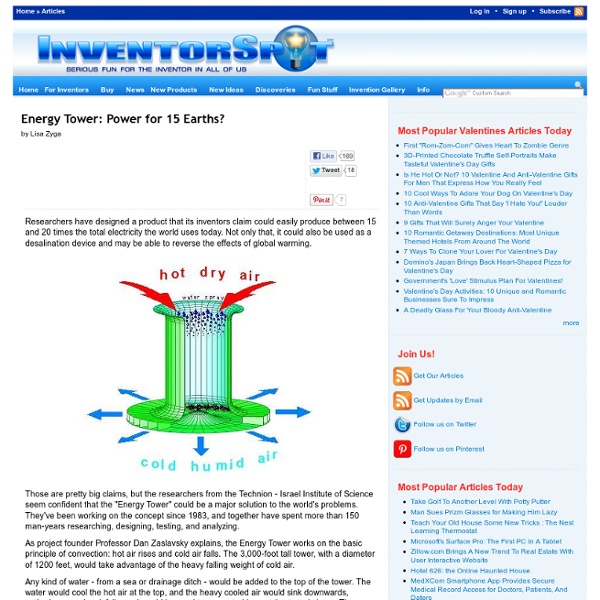 Researchers have designed a product that its inventors claim could easily produce between 15 and 20 times the total electricity the world uses today. Not only that, it could also be used as a desalination device and may be able to reverse the effects of global warming. Those are pretty big claims, but the researchers from the Technion - Israel Institute of Science seem confident that the "Energy Tower" could be a major solution to the world's problems. They've been working on the concept since 1983, and together have spent more than 150 man-years researching, designing, testing, and analyzing. As project founder Professor Dan Zaslavsky explains, the Energy Tower works on the basic principle of convection: hot air rises and cold air falls. The 3,000-foot tall tower, with a diameter of 1200 feet, would take advantage of the heavy falling weight of cold air. Any kind of water - from a sea or drainage ditch - would be added to the top of the tower. Via: Israel21c

Small liquid sensor can detect cancer instantly May 21, 2013 3:13 pm | by The Associated Press | Specialty drugmaker Biogen Idec said Tuesday it submitted a new injectable multiple sclerosis drug to the Food and Drug Administration for U.S. market approval. The drug, called Plegridy, is intended to treat patients with relapsing forms of multiple sclerosis. May 21, 2013 3:03 pm | by Tom Robinette, University of Cincinnati | An international team of researchers may have found what cause a dramatic cooling near the end of the last major Ice Age more than 12,000 years ago. May 21, 2013 2:58 pm | by Hannah Hickey, University of Washington | Until recently people believed much of the rain forest’s carbon floated down the Amazon River and ended up deep in the ocean. Advertisement Ending Ageing — An update from Aubrey de Grey's co-author (Includes interview) Ageing - or aging as they say in the US, is something we all have to do, but only if we're lucky. And here to talk about it is... MR: My name is Michael Rae; I'm one of Dr de Grey's research assistants, and coauthor of his book, Ending Aging . Gerontologist and Othello player extraordinaire Aubrey de Grey and two members of his team at SENS, including co-author Michael Rae. The same trick has been used to generate a functional (although so far short-lived) set of lungs and a liver.

The Cayce Cold Cure: A cold cannot exist in Alkaline! Are you always justgetting over a cold,or catching a new one? Edgar Cayce’s cold curecan end the misery, and help build yourlong-term natural health! We all know the dismal warning signs: a sore throat; runny nose; sneezing and coughing; a feeling of heaviness and dragging; or maybe just feeling out of sorts and screwy the day before. It varies -- that’s why it’s good to know your personal “storm signals,” an important part of self-health. I started out cold-prone. I remember getting up at 3:00 am, when it was dark and miserable outside, and going to work absolutely exhausted. We’d tried to keep the Cayce diet for years, with its stress on the right acid-alkaline balance. Still, Cayce had said more than once that a person didn’t need to get a cold at all. Here’s what he said to do. Baking soda (sodium bicarbonate) – This was the backbone of the Cayce cold cure, because it is one of the basic elements of the body, and strongly alkaline. Grapefruit Oranges Lemons Limes Orange juice (with lime)

Brobdingnagian Bards - Irish, Folk & Celtic Music from Austin, Texas The World's First 3D Printing Pen that Lets you Draw Sculptures in Real Time Forget those pesky 3D printers that require software and the knowledge of 3D modeling and behold the 3Doodler, the world’s first pen that draws in three dimensions in real time. Imagine holding a pen and waving it through the air, only the line your pen creates stays frozen, suspended and permanent in 3D space. Sound like magic? Well it certainly looks like it, watch the video above to see the thing in action.

SEO Plugin for Wordpress - A must have plugin for your WordPress blog During the mom blog to money blog series , one of the topics was must use WordPress plugins. Holly wrote about one of her favorites, the editorial calendar . In the mom blog money blog workshop , Laurie Turk mentions some other ones that are essential for your blog including an SEO plugin for WordPress. Now, if you have been living under a blogging rock, SEO stands for search engine optimization and it’s something you want to do for your blog to increase your traffic and your passive income. One really easy way to help improve your SEO is to use a SEO plugin for your WordPress blog. First, I’m going to remind you to backup your blog before adding any plugins. After installing WordPress SEO by Yoast, you will see a new item in the menu on the left that’s titled “SEO.” In the dashboard tab, there is an introduction tour you can take if you so desire to learn more about the plugin. The area you are going to be most concerned with for this SEO plugin is in your “Add New Post” section.

Greenpeace, Coke's 'recycling war' spills into Google Greenpeace's controversial recycling ad According to Greenpeace, commercial networks have banned their latest ad in support of recycling. The “recycling wars” between Coca-Cola and Greenpeace have spilt into cyberspace, with the beverage giant buying the top advertising slot for searches of the environmental group's name. The battle for internet attention follows claims by Greenpeace that free-to-air television channels 7, 9, 10 and SBS had all declined to broadcast the group's anti-Coca-Cola, pro-recycling ad. “Pretty much everywhere we've gone, advertising space has been blocked,” James Lorenz, communications manager for Greenpeace, said. “Our assumption is that it's the advertising pressure from Coke.” Commercial TV doesn't like dead birds. Since May 5, Greenpeace's “Stop Coca-Cola trashing Australia” video has received almost 1 million views. Advertisement Coca-Cola opposes Greenpeace's call for a national recycling scheme. No gag, Coke says Coca-Cola, Greenpeace go toe to toe on Google.

Lead, Follow or Get the Fuck Out of the Way Today’s post courtesy of the Dave McClure school of vocabulary. About a month ago I was meeting with a seasoned entrepreneur. After 10 minutes I felt like we were old buddies because we had both been through the trenches of startup tech land and had had similar experiences. He was recounting one of his higher profile startups to me. He said that when talking with the board and with investors he realized that he was no longer visionary in this particular field and certainly no longer passionate about it. He told me his motto, which is one that I’ve always lived by. Hallelujah. I sure wish the founders of Yahoo! Why does this credo resonate with me? 1. When Marc Benioff declared “the end of software” industry insiders scoffed. He has built an amazing facility, has established a design-centric credo, has assembled great mentors and certainly gets access to great talent. Leaders need to be early, have conviction, be persuasive and get others to follow when rational people should not. 2. 3.