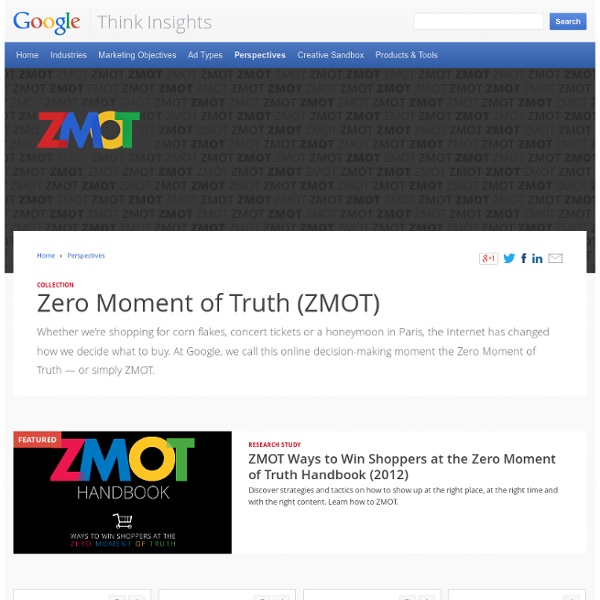 Interview ZMOT and Moms The pressures on household budgets are bigger than ever, and moms want to make smarter, better purchases. That's why many are turning to search — increasingly on their mobile phones — to get reliable information. This is the Zero Moment of Truth (ZMOT), and brand marketers, especially those targeting moms, need to plan for it, explain John Ross, CEO of Shopper Sciences, and Tina Sharkey, Chairman and Global President of BabyCenter.

‘People Talking About This’ defined Facebook introduced “People Talking About This” in October, but the new metric is still unclear to many page owners. Part of the confusion comes from the name, which sounds like it calculates the mentions of a topic across the social network, when in reality, the metric only counts direct interactions with a page. Further misunderstanding results from the difference in how this number is reported versus how page Likes are reported. Page owners who know what type of activity increases People Talking About This can improve their Facebook marketing efforts by reaching fans and their friends. The Growing Portrait Of Google As A Big, Scary, Expanding Everywhere Copy Monster Twice this year, Google’s been fairly frank and vocal about something competitors have done that it feels is unfair. Twice, I’ve watched the technosphere largely react by beating the company over the head with a “You do whatever you want and copy everyone else” stick. Does that measure up, and more so than for Google than other companies?

Product Watch the Podio video You can work with everyone on Podio: with your co-workers or with your clients in dedicated work spaces. In your free Employee Network your entire company can communicate, anyone with a company email-address can join. Podio Apps add structure to your work, with a social activity stream featuring comments, likes and status updates. Get started for free Project ManagementDiscover the easy way to run projects. Better Apartment Photos Rent Out Faster mikebaird (Flickr) A recent experiment conducted by a UK agency looked at how professional photography impacted the length of time a property stayed on the market. In the study, the agency posted two sets of photos of the same unit. One ad had a set of photos taken by a professional photographer, and the other ad used amateur photos. The agency counted the number of responses to the ad and compared the results.

Facebook Explains The Four Ways It Sorts The News Feed And Insists Average Page Reach Didn’t Decrease Today Facebook addressed the controversy surrounding the news feed and a reduction in reach for some Pages. It outlined the four main factors that determine if a post shows up in the news feed, and insisted Page reach didn’t decrease overall. However a news feed algorithm change did start reducing reach for Pages that get complaints and that successfully cut total complaints by a double digit percentage. Facebook’s news feed product manager Will Cathcart told a room of reporters at Facebook’s headquarters this morning that “The problem we face with the news feed is that people come to Facebook everyday, but people don’t have enough time to check out absolutely everything that’s going on.” So to determine if any given Page post shows up in the news feed, Facebook looks at four main factors:

YouTube's Life in a Day movie is a stunner - Google After gaining much attention at Sundance, Berlin and SXSW film festivals this past January, YouTube’s Life in a Day premiered last night in theaters in major cities in the U.K. and the U.S. The film was directed by Oscar-winning Kevin Macdonald, who took over 80,000 submissions and 4,500 hours of footage from 192 countries and created a feature-length documentary reflecting people’s lives on the 24th of July, 2010. While over 70,000 hours of uploaded video was user-submitted, the team sent 400 cameras out to the developing world to capture 20-30% of the final film. “We filmed the people who don’t have Internet or cameras in order to paint a global picture. I didn’t want a global film that’s just about rich people, or Europeans and North Americans,” said Director Kevin MacDonald at last night’s premiere. The film has a political element to it and MacDonald juxtaposes certain scenes to prove the disparate differences on Earth, an underlying theme in the film.

94% of U.S. Wineries Are On Facebook, 73% on Twitter 94% of American wineries surveyed by ABLE Social Media Marketing are on Facebook and 73% are on Twitter. The study, done in December 2011, shows that American wineries are active in social media and that it's producing results. 47% of US wineries said that Facebook helps them generate sales (72% sell wine on their website). While this study focuses on wineries only, companies in other industries should take note of these results.